Let's All Buy the Mets 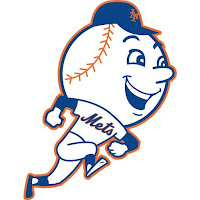 Since I wrote a couple of times on the subject yesterday I've been reading quite a bit on the Alex Rodriguez bid to buy the Mets. I've seen it stated in so many places now that A-Rod is going to be able to steal the team at a cheap discount that I've started to question why I shouldn't try to come up with a bid to buy the club.

Being a man of action, I've already looked under the cushions of my couch and come up with almost a dollar in change.  I haven't looked in my car yet, but I'm fairly confident that I can come up with at least that much there. That's made me so confident in my chances that I am starting to look for minority investors to aid in this endeavor. If you're interested, and you still have an untapped change jar in your kitchen cabinet, let's talk.

Of course, if the Mets are to be really had at a steep discount, I suspect that you, me and A-Rod might have some more competition. Sure, there's that troublesome pandemic going on right now with all the economic woes that it's creating, but doesn't everyone love a bargain? Seriously, though, assuming that the Wilpons are essentially forced to sell because of bad cash flow, there's little doubt that the price will be down from what it might have been if the Coronavirus never dropped in. Still, how often does a major league franchise in New York city go up for sale?

You have to think there will be rivals in this attempt to buy the Mets. While the Coronavirus recession is hurting everyone financially - except for the scumbags who have figured out how to turn a profit from it - the extremely rich in this country are still very, very rich. Despite reading breathless takes on how Alex is going to "steal" the Mets, I doubt very much that this will happen. Hey, I promise that my group and myself will be quite aggressive.

I think the real question here will be about what kind of financial position an eventual buyer will be in once a sale does go through. If a purchase of this team is financed with a lot of debt it's helpful to remember that all debt eventually needs to be paid back - unless your last name happens to rhyme with dump. There's going to be a serious deficiency in profits for quite a while. We could be talking 2022 before we see fans crowding into stadiums again for a full season. Hopefully there will be enough people left at that point that can afford to do so.

For those of us who saw what happened to this franchise post-Madoff, and also remember the Frank McCourt fiasco with the Dodgers from about that same time period, we don't want to spend the next decade or so wondering if the new owner's checks will clear.

I saw an article on AMNY.com that cites an unnamed (of course) source with "knowledge of the situation" that hedge fund billionaire Steve Cohen is still a possible buyer going forward, disputing another unnamed source in yesterday's Post article linked from yesterday's post that says the Wilpons will take less money from Anyone-But-Cohen.

I'm not trying to be Cohen's cheerleader, the dude paid $1.8 billion to settle a criminal case, after all. It still makes sense to me, however, that a guy worth in excess of $10 billion might be a better bet going forward than a group financed by a considerable amount of debt.

I wrote a post back a few weeks ago where I fantasized about a Bachelor-like scenario where I would be wooed by potential buyers for the team and ultimately decide which one was awarded my rose. The things I wrote about there still hold. As much as I want to see the Wilpons out the door, I don't want the same problems cropping back up with a different name.

My ideal owner would hire good people, hand them the keys and let them steer the club forward. We wouldn't be reading about their finances or feuds between the team and former players. There wouldn't be anonymous leaks to the press where our new owner spins his or her version of some issue. I can promise all of you right now, if my group's bid is ultimately successful, that none of that crap will happen on my watch.

No matter who comes out on top and ultimately buys the club, I have a pretty clear idea of how I will personally judge whether the right billionaire won. After the hoopla dies down from the sale, if the next time I really think about this person is when they are accepting the World Series Championship trophy in a Champagne drenched Mets locker room, it will all have been worthwhile.

Please stay well, everyone.  See you back here soon.