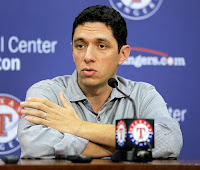 Jon Daniels is looking for a new job. Should the Mets consider him for their PBO?

The Texas Rangers fired their president, Jon Daniels, last Wednesday. That ended Daniels' run of almost 17 years at the helm of that club. When he was first promoted to replace John Hart as GM in October 2005, the then 28-year-old Queens, NY native was a true baseball wunderkind. He was the youngest team GM in MLB history. Interestingly, one of Daniels' deals in his first winter as GM was to trade pitcher Chris Young to the Padres. 17 years later, Young is taking over the top role with the Rangers.

How the Dominoes Fall 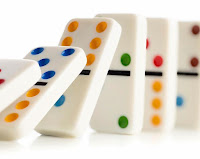 More thoughts on constructing a Mets starting rotation in 2023. Is exercising Carlos Carrasco's $14 million option for next season really a no-brainer?
The New York Mets had a rough time down in Atlanta this week. They lost starting pitchers Carlos Carrasco and Taijuan Walker to injuries in the first two games of the Atlanta series, although it looks like Walker will only miss one start. Their infield defense took a big hit, losing Luis Guillorme and Eduardo Escobar to the I.L. The Mets' offense seems to be in hit-or-miss mode since the series against the Cincinnati Reds with run totals of 1, 1, 6, 1, 0, 9, 2, 7, 8, and 1 through Saturday's doubleheader split with the Phillies. They lost all but one of the games in which they scored 2 runs or fewer.
Read more »
By Mike Steffanos at August 21, 2022 No comments:

August and Everything After

In balancing the needs of the present with those of the future, the Mets are doing right by their fans.

Things have been fairly hectic for me lately. I haven't been able to post here as often as I would wish. More on that later, but first, let's catch up on some Mets thoughts. My last post was a week before the trade deadline. Although I did expect the Mets to make a stronger push for a left-handed reliever, I wasn't surprised that the Mets didn't make a huge splash in the deadline market. The brain trust had pretty well telegraphed their thinking ahead of time, and it was clear they weren't going to trade top prospects for rentals.