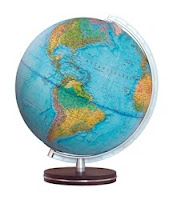 I grew up in a very unconventional household. I don't retain the warm memories of home and family that most folks have. I don't live all that many miles away from where I grew up, but I honestly can't remember the last time I went back there. Sometimes I find myself driving through my old hometown on an errand and momentarily think, if I take that next left and a couple of rights, I can check out the old homestead. Invariably, I find myself driving straight on to my destination. There's nothing there worth even a detour of a few minutes.

The last time I actually did go by the place was many years ago now. I was in a weird mood and wondered what it would feel like to see it. It was evening, and I was driving back from some errand that I can't even recall. I wasn't tired and didn't feel any urgency to get home. I found myself thinking of that house, which even back then I hadn't been inside of for years and, on a whim, found myself driving there.
I parked a block or so away so I could walk to it. For most of the years I spent there, I was either walking or riding a bike, and I wanted to approach it in a way that felt familiar to me. Even during the short walk to the old place, I noted so many changes from the neighborhood that used to be mine. Most of the houses were changed quite a bit. Many of the old trees from my youth were lost to a big storm that swept through a decade earlier. Everything looked smaller, older, and less significant than it used to. It felt more like walking through a movie set than a place I once called home.

By the time I got to my actual former house, I was already beginning to understand that this attempt to go backward in time was a complete failure. There was no secret knowledge to be gleaned about myself or who I was from that old two-family box. The grey wooden frame was sided with cheap white vinyl. The drafty old windows had been replaced, a couple of minor structural additions had been made, but the house still looked as plain and unremarkable as I remembered. Looking at it, I felt absolutely nothing. I found the window from my old bedroom, still nothing. Yep, it was time to go.

I've thought a lot about the concept of home over the years. Realizing that I couldn't look back for it, I had to define it for myself. The definition didn't come to me all at once, but rather in fits and starts over many years.

In my late teens and early twenties, I spent a lot of time traveling the country, mostly because traveling was something we rarely did in my family growing up. As a younger kid, I remember looking at a street map of my town and being mesmerized by the exotic (to me) names of streets in the northern part of town that seemed to be part of a different world. As I grew older, the maps that fueled my dreams were of places a little further away. I remember getting a hold of a road atlas and planning trips to various parts of the country, particularly the west.

By the time I hit my teens, my Mom had exhausted most of what little maternal instincts she had, while I was eager to begin the travels of which I had dreamed of for so long. Whenever I could get a few bucks together, I would pack up a backpack's worth of belongings and buy a bus ticket to someplace out west. Once I got there, I would hitchhike around and try to find some odd jobs to keep myself going as long as possible. It wasn't a sensible way of doing things, and it's not something that I would recommend to someone else, but I did get a lot of great memories out of it, and I developed a life-long passion for experiencing somewhere else.

I remember that I was in my early twenties towards the end of this period of my life, on a Greyhound bus back home from an extended trip away. I got on the bus in San Francisco for a trip to New York that took about 4 days back then. I had been away for a while, and the hitchhiking portion of the trip had featured more than even the usual number of rides from weirdos and losers and less from the good people that used to make traveling that way fun. I was starting to feel that I was ready to move on to a different stage of life.

The eastbound bus had been crisscrossing states, making its way slowly homeward for three days. In the middle of that stretch, a pretty girl my age had boarded in Iowa, and we had hit it off as sometimes happened in traveling. When she got off about 12 hours later, the bus felt emptier.

Eventually, we passed through Chicago, then Indiana. We stopped in Cleveland for a while, then continued east. In late afternoon we crossed from Ohio into Pennsylvania on I-80, New York City, and the end of that interminable ride lay only a few more hours up the road. I remember that it was raining, at times quite heavily.

We crossed I-79, which heads down towards Pittsburgh. I knew my father, who I hadn't seen in more than 15 years, lived down there somewhere. I spent some time trying to picture what his life was like and if he ever wondered about mine. A couple of years later, I found the courage to find him and knock on his door, but that's another story.

A few miles past the cutoff towards State College, the highway came to a complete stop. Flashing lights in the distance marked the terrible accident that shut the road down. It took a long time for us to start up again and creep by the accident site. When we finally did, I remember looking out the rain-spattered window and seeing a horrible crash scene and what looked to be a pair of tarped-covered bodies in the grass just off the road. I had never seen a dead body before.

Needless to say, that sight put everyone on the bus in a weird mood. Then, the icing on the cake came a few miles down the road when the bus broke down. The driver managed to get the bus into a safe area off the highway, but now we had to wait for another bus. Since we were parked in a fairly safe area, the driver let some of us get off the bus to smoke outside. The rain had stopped, and the weather was clearing rapidly. The moon broke through, and then the stars. A cool, soft breeze was blowing.

Some of us talked about what we had seen, and then the conversation changed to talk of home. It was at that point that it clearly occurred to me that if I ever was going to have a true feeling of coming home, I would have to define that thing for myself and then figure out how to make it happen. I knew that I had some work ahead of me and that it would take a while.

I remember looking at the woods around me and noticing that they looked quite familiar. As someone who enjoyed hiking when I was in Connecticut in between journeys, I recognized the familiar plants of an eastern forest. Coming back from the west, where the forests are quite different, I remarked on it to a guy I was talking with who turned out to be a hiking buff, too. I remember having a long, nerdy conversation about it with him.

After a truly weird evening, the feeling of familiar surroundings and being close to home felt quite strong to me, even though there were many more hours and miles ahead of me. In a way that I never saw coming, my life took a turn that night.

Baseball coming back has always been a hope for many of us since it shut down back in Mid-March. Finally, these past 2 weeks have featured real discussions geared towards making this return a reality. As important as this is, it's also a reminder that we will not get back everything we have lost.

We might not get the game back at all if the players and owners can't agree on money. Even if they agree, the challenges of keeping everyone safe and on the field are incredibly difficult. Finally, if all of the obstacles are overcome, the game we're getting back will not be the game we lost. It will look weird, sound weird, pretty much be weird.

I remember back in the 70s when television still featured only what you could pull in with an antenna, late-night commercials were hawking greatest hits of the year albums from a group named the Sound Effects. They weren't a real group, just some studio guys put together to record an album of other people's hits. I guess that was cheaper to make than licensing the actual hit songs from the original artists. The commercial would feature snippets of the songs, and they would sound kind of like the original hits if you didn't listen closely.

If baseball returns in 2020, it's likely to feel a bit like those old albums. We'll know what we're looking at looks kind of familiar, but it's not going to make you feel the same way as watching the original did. It can't, really.

Humans are pretty darned adaptable creatures. We all, if we allow ourselves, find our way home eventually. Sometimes it takes longer than you want it to, and maybe the road you wind up taking isn't the one you expected to be on. I do imagine myself sitting in Citi Field packed with fans again, spending a summer evening watching a ballgame where players are crowding together, spitting and giving high fives. No one is worried about getting sick or maybe dying. As for what happens between now and then, I'll just look at it as a waypoint on the journey.