A Sliver of Daylight 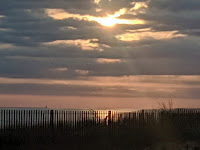 I'm not ready to throw a party yet by any stretch, but I actually found a little glimmer of hope in the latest news on the negotiations between MLB and the players. In multiple reports, including this piece by Joel Sherman in the New York Post, we read that MLB has come back to the Players' Union with an offer to play a season of 30-60 games and pay the players their full prorated salaries. The essence of this offer would be that the players aren't asked to make a further concession on pay, while MLB would satisfy their objective of getting to the playoffs faster.

Don't get me wrong here. I know this offer isn't going to fly. The players are quite unlikely to agree to play such a limited number of games, and I'm sure that MLB understood that before making the offer. What I find slightly hopeful here is that there has finally been an offer that has some room in it for actual bargaining to take place.

I think this process has gone on long enough for us to have a fairly good understanding of what both sides are looking to achieve:


There are some other issues involved, too. Players are worried that fewer games could damage their value if they are up for contract renewal or free agency. If a season of 30 - 60 games is played, one prolonged slump can really put a player in a weaker negotiating position. There's a real possibility that some players would elect not to risk their health and future earnings potential for the small amount of money involved, particularly if MLB sets a game slate at the lower end of that 30 - 60 number.

The owners claim that every regular season game played without fans will be a money loser for them. They want to get the Playoff slate in, and worry that a second wave of COVID-19 could take place this fall and force a cancellation of the Playoffs. It's impossible to verify the owners' claims that they would lose money for each regular season game, as the vast majority of clubs have closed books, but it's at least clear that they do want to limit the regular season as much as possible.

My personal thoughts on the length of the regular season is that a really low number of games would almost certainly hurt the legitimacy of any Playoffs that follow. Obviously anything that happens this year will fall far short of the 162-game marathon that constitutes a normal MLB season, but the closer you can get to it, the more legitimate the Playoffs will be. The half-season that's been bandied about in recent offers sounds about the best compromise right now, given how much time has already passed.

Putting that aside for a minute, the fact that MLB offered the players what they're looking for, prorated pay, is the first significant offer in this whole negotiation. The Union could at least make a counteroffer for more games and offer MLB something in return. The idea of some deferred money has been tossed around and could be a possible point of compromise from the Players' side.

There's still a long way to go to play ball this season, but any small nugget of hope is welcome at this point. Still, any optimism is tempered by the current animosity on both sides and, in particular, the way MLB keeps negotiating through the press. Another article by Joel Sherman in the Post speaks to the rancor between MLB and the Union over the - God help us all - infamous "smoking gun" email. For some reason, MLB's position is that the Union has agreed that further salary concessions would be needed. Meanwhile, the Union's position is that acknowledging that their could be additional talks if games were played without fans, doesn't require them to agree to concessions. I found the quote from Union Chief Tony Clark summed it up perfectly:


“We have never denied that MLB has the ability to come back and try to persuade us to change that agreement based on their economic concerns. They’ve tried unsuccessfully. In fact, Rob confirmed [Sunday] that, ‘We can pay you 100 percent of salary right now.’ This is all part of the league’s attempts to negotiate through the media instead of focusing on how to bring baseball back to its fans.”

As I pointed out previously, it seems like the most radical, hardline folks on the ownership side are in control of the negotiations at this point. They seem intent on scoring points in the press, as with the whole silly "smoking gun" email kerfuffle, rather than getting to the hard negotiating required to come to a deal. I hope that the cooler, more moderate folks on both sides can try to move negotiations forward. Otherwise, everyone loses - players, fans and team owners.

Any owner who doesn't realize that a complete no-show by baseball this season severely harms their business is a fool. Meanwhile, the Players need to see that if the sport takes a hit, it's only going to hurt their chances to make money, both in future contracts and in off the field endorsements. We're still waiting to see some real, prolonged negotiating.

One last point on this subject. I've read that the owners are wary of pushing back the playoffs for a month due to possible conflict with Network TV Schedules. I don't know,  but it seems unlikely to me that the networks will have new shows ready to debut as usual in September. I suspect that it will be pretty easy to make way for Postseason baseball, even in November. Especially if they have months to plan for it.

At ESPN, Jesse Rogers offers some possible points of compromise on what might move negotiations forward. Salary deferrals might offer a middle ground between drastic cuts and full prorated salaries. I thought his idea for an All-Star game after the end of the Playoffs offered an interesting opportunity for more revenue for MLB.

One point where I differ with Rogers is on how playing a short season would affect players negotiating after the season. Rogers makes the claim that "the guy who hits .400 could be rewarded as much as the one punished for hitting .180." I disagree. I think the clubs would be more wary of players who performed poorly, but more willing to discard those enjoying a jump in performance as small sample size.

I know some of the writers whose opinion I respect think that some players will sit out the season rather than possibly seeing their value take a hit if they struggle in a short season. I don't think this would be a good move. If I was a GM looking at a potential signing, I think I'd be hesitant to sign someone who would be a year-and-a-half removed from playing ball by the time 2021 rolls around. That's a long time to be away from a game that demands a high level of finely honed skills in order to compete successfully. Unless a player had a legit health concern, I think his best interest would be served by playing in 2020 - provided there is an opportunity to play.

Over at Fangraphs, Dan Szymborski posits that it might make more sense just to play a big tournament than the really short regular season that the owners proposed. Utilizing the ZIPS projection system, Szymborski points out how meaningless a 50-game season would be:


At 50 games, the ability to meaningfully differentiate between the great and the good, the mediocre and the bad, starts to fade significantly. There’s a one-in-five chance that the winner of the World Series will be a team believed to be .500 or worse... Of course, it’s a philosophical question. A 20% chance of a below-average team winning the World Series isn’t inherently superior or inferior to a 3% chance. But if the season doesn’t do a good job differentiating between dousing your head with champagne versus what’s in the bathroom urinals, what purpose does it serve?

It's a good question. I'd rather see them get in a half-season of ball, but if MLB and the Players' Union can't come to an agreement on compensation, maybe a giant post-season tournament would make sense. It would be better than staying dark for a year, and any winner of that tournament wouldn't have any less legitimacy than Playoff seeding decided by an extremely truncated regular season.

One more Joel Sherman piece to talk about. The man has been doing tremendous work covering different aspects of these negotiations. Honestly, if a friend asked me who I would recommend if he only wanted to follow one writer on this subject, my answer would be Sherman. He's really been offering a smart, thorough and nuanced view of these proceedings.

Anyway, Sherman points out that the potential disaster of not playing in 2020 isn't all about the Players' greed, although they will almost certainly get the lion's share of the blame if these talks go south. That's just how it's always been. Characterizing players as selfish and greedy has worked for the owners since the 1970s. They're just more visible to the public. Quick, tell me who owns the Cleveland Indians? How about the Braves? Padres? You get the picture.

Sherman doesn't let the players off the hook in these negotiations, nor should anyone, but he points out the ways that MLB manipulates the salaries and service time of players. Interesting piece.

Baseball America is reporting that MLB is considering an expanded Arizona/Florida fall league in order to give prospects some valuable development time. I've speculated on the subject on this blog previously. I feel that any club that's run correctly has to do anything possible to engage their prospects and not let them miss a whole season of development. Glad to see there is a plan in place to do something.


Lastly, I have a piece from The Athletic from about 10 days ago. I saved it to comment on, but failed to get around to it. The author, Rick Burton, speculates that the current pandemic can conceivably put an end to the ongoing upward spiral in the value of sports franchises. It's an interesting read.

It's not just the financial crisis caused by this pandemic that's going to suck value out of these franchises. MLB Owners have to see that a failure to get the game in front of fans in 2020 is likely to accelerate the process of devaluing their largest asset. I mean, they have to, right? Someone once told me you don't have to be smart to be rich, MLB owners are certainly living proof of that.

Well, that's it for me today. I sincerely hope that we start seeing some movement towards an agreement between MLB and the Players soon. Sometimes I have the same feeling watching this unfold as I do when I witness a fight between two people I care about. It's obvious to everyone but them that they're both making a terrible mistake. Meanwhile, they both can only see their side of the grievance and are blinded to everything else.

Take care, everyone, and please stay safe. Thanks for stopping by. Please come back again.