Some Thoughts As Summer Training Looms 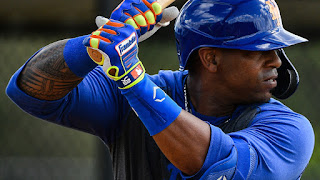 It's good to be back writing today. There's a lot to talk about with summer training starting this week. I think a good place to start is with Joel Sherman's article in the New York Post yesterday. Sherman voices a dilemma that I've been dealing with as a a startup becomes reality: while he believes that baseball should attempt to play a season, he still has doubts about it. I feel the same way. Baseball is by far and away the sport I care about. Any of my other sports allegiances are quite minor compared to how I feel about Major League Baseball and the Mets. I do want it back very much in 2020, but I do have some worries about the players and others involved in the sport.

The conventional wisdom seems to be that young, healthy athletes have little to fear from a COVID-19 infection. While they certainly have less reason to fear than a 61-year-old geezer like myself, the truth is that young, healthy individuals can die from the disease, or suffer debilitating lung damage. If this winds up happening to anyone in the game of baseball this year, I'm going to feel bad about it, and wonder if my entertainment was worth the price. Even knowing there's a real risk gives me pause.

One thing I won't do is hold it against any player that chooses not to play this season. So far it's been relatively minor players, but sooner or later it could be a very important player, even a star. As Sherman points out, MLB is not an essential business. You could only hope that they continue to monitor the risk involved and act accordingly. Dr. Faucci issued a rather stark warning that the daily increase of new cases in the country, currently around 40,000, could reach 100,000 if people don't take steps to limit the spread of coronavirus. If it does get really bad again, I don't know how MLB would justify continuing to play - particularly if infections within the game start increasing.

I'm going to think about and share my opinion on a lot of what's going on as the sport gears up to a season. I sincerely hope that I never lose site of the fact that the players, umpires, coaches and support personnel within the game are real people, and what happens to them matters more than the sport of baseball itself.


At the New York Times, Tyler Kepner has the details on a conference call Brodie Van Wagenen had with reporter. BVW is described as "optimistic", citing the club's 39-21 finish to last season and pointing out that a sprint like that over the 60-game 2020 season would put the Mets in the playoffs.

For myself, I couldn't help but think that if the Mets replicated some of the less stellar 60-game stretches from last season it could get very ugly very fast. Still, I do see the point behind emphasizing the positive. The Mets do have a pretty good team. Their schedule is quite difficult, but they should be able to at least contend. I think so much is going to depend on how fast the club gets off the first three weeks or so and, of course, whether they can keep the key players healthy.

Once camp gets underway, we should start getting answers to some of these questions.

Jay Jaffe has a nice piece at FanGraphs explaining all of the new roster rules for 2020, including 60-man player pools, taxi squads, rule 5 draftees and suspensions. Apparently MLB won't prorate the length of existing suspensions, but won't let them carry on past this season.

Apparently MLB and the clubs won't be disclosing the names of players that test positive for the virus, due to privacy concerns. It will be up to the individual players if they chose to disclose they tested positive. While this is understandable due to medical privacy concerns, I wonder if baseball will release general numbers on infections without naming names.

In news that makes me profoundly sad, Baseball's minor leagues have officially cancelled the 2020 minor league season. Not that this was a surprise but, as someone who loves minor league ball, it almost feels like they're cancelling summer. I feel bad for the thousands of kids who will miss out on the joy of spending a day at the ballpark with Dad (or Mom). I hope that these clubs can hang on and survive to better days and happier times.

To end on a much happier note, today is the 20th anniversary of one of the most awesome Mets games of all time. I wrote a post recently on my grandmother, who could never believe that the Mets were going to lose until the last out was recorded. This was the kind of win that she would have just loved, only made better off by the fact that an Italian kid named Mike capped it all off.

I never get tired of watching that one.

That's it for me today. Thanks for stopping by. Please stay safe, stay well and take care.