Yesterday I wrote about how I became a Mets fan at 10 years old. I didn't know much about baseball when I started watching it, but I liked the game and I picked things up fairly quickly. One of the earliest lessons learned was the value of great starting pitching. I knew from early on that Tom Seaver was really special, and I quickly came to appreciate the talents of Jerry Koosman, Gary Gentry and, later on, Jon Matlack.

It took me longer to realize the importance of having the right guy behind the plate, managing your pitching staff and calling the game. It was over a period of years that I slowly came to appreciate the superb talents of the the man who caught most of the games those pitchers threw, Jerry Grote.

Grote was already a well-established member of the Mets when I started rooting for them in 1969. Originally from San Antonio, Texas, Grote was drafted by the Houston Colt .45s (later the Astros) in 1962 after one season at Trinity University in San Antonio. The 20-year-old debuted in a brief cameo for Houston in 1963. By 1964 Grote was sharing the catching duties in Houston, appearing in 100 games but only slashing .181/.240/.262 on the season. Grote spent all of the 1965 season in Triple-A, then was traded to the Mets after that season for a player to be named later and cash.

Jerry Grote became the Mets starting catcher in 1966, batting .237 and earning praise for his handling of the pitching and defensive skills. The following season 22-year-old Tom Seaver appeared on the scene and teamed up with the 24-year-old Grote in a pairing that would notch a lot of wins over the next decade. Grote only batted .195 on the season, but continued to demonstrate fine defensive skills, including throwing out 49% of baserunners attempting to steal.

1968 saw a couple of huge additions to the Mets. Gil Hodges took over as manger, and a young lefty named Jerry Koosman joined Tom Seaver in the rotation. Grote enjoyed the first of his two All-Star appearances, and gave a lot of the credit for his improved offense and game management to his new manager:


"This is the biggest thrill in my life. This year we lowered my hands and shortened my swing at bat, and I started hitting those line drives again. And when I go out to call a game for our young pitchers, I feel prepared and comfortable. There's no second-guessing except to prevent mistakes." 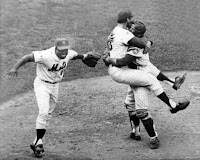 Grote had a solid year offensively in 1969, batting .252 with career highs in home runs (6) and RBIs (40). He had a terrific season behind the plate, throwing out 56% of baserunners and masterfully handling a pitching staff featuring Seaver, Koosman and Gary Gentry. He also excelled calling games for the pitching staff. Pitchers liked to throw to him, and you rarely saw them shake off a lot of pitches. Grote caught every inning of every game the Mets played in the playoffs against the Braves and the Orioles, including the final out of the World Series that is captured in the iconic picture of Jerry Koosman jumping into his catchers arms.

Grote continued to put up solid numbers in 1970 and 1971, but the team struggled to recapture the magic of that 1969 championship. It wasn't for lack of leadership from their now veteran backstop. Grote was widely acclaimed as one of the best defensive catchers in the game. Lou Brock once referred to Grote as "the toughest catcher in the league to steal on."

He was also developing a reputation as a world class curmudgeon. Grote wasn't afraid to share his opinions with umpires if he didn't think his pitcher was getting the calls. I remember seeing Grote get annoyed by a young Mets pitcher failing to throw strikes or shaking off too many pitches. Grote would put a little extra mustard when returning the ball back to the pitcher to show his displeasure.

Injuries marred Grote's 1972 and 1973 seasons, although he did make it back in '73 for the playoff push and to once again catch every inning of every Mets playoff game.

In 1974 Grote was named to his second All-Star game, but again dealt with injuries while the Mets sank back into a fifth place finish. There was one iconic Grote moment that season when umpire Bruce Froemming, feuding with the Mets over some alleged missing baseballs, accused Grote of allowing a Harry Parker pitch to purposely hit him. Grote claimed he was crossed up, but I would bet that it was intentional. It was a very Grote-like thing to do.

There would be no more magic during Jerry Grote's final years in New York. The best they could do was a third place finish in 1976. Grote had good offensive seasons for the Mets during that stretch, and continued to be one of the best defensive catchers in the game, but the Mets were slowly sinking into the murk of one of the darkest areas of their existence.

In June of 1977, the Mets betrayed their fans by shipping Tom Seaver out of town. That August, Grote was traded to the Dodgers for a couple of prospects that didn't pan out. Grote retired following the 1978 season, made a brief comeback with Kansas City and the Dodgers in 1981, then packed it in for good.

For Mets fans who go back to that period, Jerry Grote was the prototypical defensive catcher who all others are compared against. No one has even come close from a defensive standpoint, although there was one guy in the late 1990s and early years of this century that was a heck of a hitter.

As much as I loved Piazza, I always think of him at the plate with a bat in his hand. When I think of a catcher, I think of Grote. Just like Tom Seaver forever will define for me greatness as a pitcher, Grote is untouched in his mastery of defensive skills behind the plate. I was spoiled early on with both of those guys. If Grote was a better hitter with some more power there might have been at least a conversation about the Hall of Fame. He really was that good. He did everything you would ask out of a catcher defensively, and made the pitching staff better with his smarts and his work ethic.

Well, that's all for me today. Thanks for stopping by and spending some time here with us today. Please stay safe, be well and take care. Talk again soon.