You're a Mean One, Mr. Grinch

I always feel a little melancholy at the end of the World Series. Baseball is the only sport that I still care passionately about, and the beginning of the next baseball season always feels very far away. This feeling has been compounded over the past decade or so by the certain knowledge that the Mets weren't going to do anything particularly interesting over the offseason. As bad as the Wilpons with money were at running the Mets, the Wilpons without money were abysmal. As a Mets fan in recent years, the hot stove months often made me feel like a kid waking up on Christmas morning eager to open his presents, only to find that they were all clothing and school supplies.
I started writing something yesterday about how different it felt to be potentially looking at an offseason that could be fun. Maybe this offseason, at last, this kid could open those brightly colored presents and find something inside that he really wanted. But then more and more stuff started trickling in about how badly New York's unpopular mayor Bill de Blasio wanted to throw a monkey wrench into Steve Cohen's purchase of the Mets. The Mets have a contract with the city because the city owns the land that the ballpark is built upon. Stories and tweets started coming out that the Mayor wanted the city's lawyers to find justification to deny Cohen's takeover of the club.
I won't lie to you. When I first started reading about this, I felt a bit depressed. But then I started thinking about it. Bill de Blasio might have some pretty good lawyers working for the city of New York, but a multi-billionaire like Steve Cohen can afford to have pretty good lawyers, too. I find it hard to believe that even a jerk like de Blasio would want to squander city resources fighting a fight that he's very unlikely to win. Indeed, Deesha Thosar in the Daily News is reporting that the city signing off on Cohen is likely to happen Friday, or shortly thereafter. And seriously, are you really going to try to block Steve Cohen on some sort of moral grounds to clear the way for Alex Rodriguez to ride in as the white knight? Give me a break.
The worry that I've seen in several of the articles about de Blasio's opposition to Cohen is that he could delay that sign off for a while and hurt the Mets chances with some of the free agents they want to pursue. Indeed, I fretted about that for a bit, and then I realized how silly I was being. If you're still worried about it, let me ask you this: Do you believe a single free agent out there will sign with another team without at least seeing if the Mets will show interest and bid up the value of his eventual contract? Even if they have no intention of coming here, they're going to wait a while and see if the Mets enter the picture. Their agents should be sued for negligence if they didn't wait for Cohen to get approved. Unless the mayor wants to drag this out for months, and he isn't showing any indications of being that stubborn, this will be over soon enough. Hey, Cohen even received the all-important endorsement from a guy who knows something about playing baseball in October:

Wishing my friend and New Yorker Steve Cohen, a successful MLB vote Friday to join Baseballs fraternity. He’s a lifetime fan. He’s wanted the team since the day I “Met” him. I’m sure he’ll get the great Met franchise back on its winning ways. MLB and the city need him. Go my man

My final worry would that this standoff would delay Sandy Alderson and whoever he is bringing in with him in their overhaul of the Mets organization. But then I thought about that, and realized that this planning is almost undoubtedly going on right now, even if it's not taking place in the offices at Citi Field. These guys will be ready to hit the ground running whenever the official signoff happens.
It still bums me a little that this long-awaited transfer could be delayed, even if only for a short time, but I've waited decades for this moment, I can hang on a bit longer. And honestly, being in the position of rooting for a billionaire is not a place I normally find myself. Steve Cohen is not my friend. My phone is never going to ring with him on the other end, inviting me out for a cold one and some good baseball talk. And that's fine. The bottom line is that a billionaire is going to own this team that I care about. All I can reasonably hope for is that he is a good steward of that team, and Cohen is showing signs that he will be that. What he does in his other business isn't my concern. I'll leave that to the regulators in the financial industry.
SNY's Andy Martino was having a great time with this stuff yesterday, gleefully tweeting out, "Oh, this is a thing." I used to do a lot of criticism of the media when I wrote my original blog 15 years ago, but I don't do much of that any more. I have to say, however. I just can't stomach Martino, and never could. He seems to delight in playing the role of everyone's annoying little brother and putting the worst possible spin on bad news. No doubt this thing with the mayor is an unwelcome pain in the ass, but it's unlikely to be anything more consequential than that. We'll see how this plays out, but I won't be looking to Andy as a reliable source for what's going on.
AMNY.com has the following quote from an unnamed source close to Cohen that kind of sums this all up for me:

When shown the reports by the Post and Martino, a source told amNewYork Metro: "Not worried."
"Cohen] will win in court," they said, if it ever got that far. "Besides, de Blasio needs bad PR like he needs a hole in the head."

I think that's reflective of my thoughts on the matter, too. Bill de Blasio can't run for mayor again thanks to term limits. He's not even popular with liberals such as myself, as he proved during his incredibly unsuccessful run for the Democratic Presidential nomination. If he drags this thing out, he'll only make himself less popular and lose anyway. 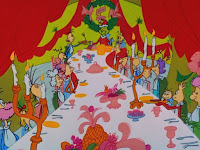 My final thought on this matter for today: Don't let the folks looking to get some clicks out of this stuff get you down. Better days are coming. Before you know it, you're going to wake up, walk down the stairs and a find a beautifully decorated tree in your living room. Your eyes will light up at the sight of all of the brightly colored packages under the tree. You're going to start unwrapping them and you're going to find the video games, action figures and other cool toys you've been waiting for, instead of those ugly sweaters and 3-ring notebooks from previous years. Bill de Blasio can make a lot of noise and maybe even make you wait a little longer for that day, but it will come.
*************************
The Mets issued a press release today that they will be holding an Instructional League at their academy in the Dominican Republic:

The New York Mets will conduct an Instructional League at the team's academy in Boca Chica, Dominican Republic. The six-week program will consist of 40 international players from within the organization and will run from November 2 to December 10. The academy will be staffed by 10 coaches as well as several members of the support staff.
This is in addition to the team's Instructional League that is currently being conducted at the team’s Spring Training facility in Port St. Lucie, FL. The program, which began on September 30, consists of 60 players and will finish on November 14. Several of the organization's top prospects are currently participating in the Instructional League in Florida including RHP Matt Allan, C Francisco Alvarez, OF Pete Crow-Armstrong, INF Brett Baty, RHP J.T. Ginn, OF Isaiah Greene, INF Ronny Mauricio, INF Shervyen Newton, OF Alex Ramirez, INF Mark Vientos and RHP Josh Wolf.

I've written repeatedly in this space since I started blogging again that it was important that the team do everything possible to keep their best prospects from losing essentially a year of development, and it's a very good thing for the future that they are on this.
*************************
I have more that I want to write about. It's funny, I've had my schedule work out in the past week that I was able to post more often than I had been, and yet I still have a collection of topics saved up that I want to get to. I know I won't be able to get to all of them, but I promise to keep the flow of new material coming all offseason. Please check back often.
That's it for today. Please stay safe, be well and take care. Have a really good day.