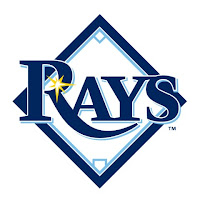 The Tampa Bay Rays get a lot of credit, most of it deserved, for running a pretty successful baseball club on a small budget. Of course, it wasn't always that way. When they came into being as the Tampa Bay Devil Rays, they spent their first decade of existence in last place in the AL East. Their best year from 1998-2007 was in 2004, the only time they won 70 games. Meanwhile, they lost over 100 games in three different years. I know the Mets franchise got off to a much tougher start back in the sixties, but baseball was much less liberal in giving players to expansion teams back then, and there was no amateur draft until 1965. I'd argue that being terrible for a decade puts the Rays in a class by themselves for ineptitude, despite the assist from the Mets in giving up Scott Kazmir for Victor Zambrano in 2004.

In 2008, the team ditched the teal color scheme and exorcised the "Devil" from their name. It immediately transformed them into a first place club and the AL pennant winner. It was the beginning of a six year stretch where the Rays finished first twice, second twice, and third the other two years. The won over 90 games in 5 of those 6 seasons, which is a level of success that the Mets have not known since the eighties. They haven't even come close to that in the decades since.

After mediocre years from 2014 - 2017, the Rays bounced back with 90+ win seasons in 2018 and 2019, and won 40 games and the AL pennant again this past pandemic-shortened season. All in all, the 13 seasons since the Devil Rays transformed into the Rays have been a remarkable success story for the club with an ugly ballpark in a bad location. I know I've written this before but, for the life of me, I don't understand why Fred and Jeff Wilpon never looked at the Rays' success and didn't do everything possible to emulate what they were doing. If they did, I think they would almost certainly own the team still today.

Of course, a corollary of Tampa Bay's success is teams in small and large markets trying to utilize tactics that the Rays have enjoyed success with in their own situations. Even the largest market clubs try not to saddle themselves with too many long-term contracts of players aging into their thirties, and try to build a deep farm system to benefit their own roster and plug holes with trades. No one else, however, pinches pennies in quite the merciless way that the Rays do. Very few of their players spend many years at all in a Rays uniform.

Joel Sherman had a piece in the New York Post earlier this week discussing one of the Rays tactics: trading away their best pitchers for prospects. They've done this repeatedly over the years and never seem to miss a beat. I do agree with Sherman that there is a lesson here for a team not to get too attached to any player in their roster, overlooking the chance to make themselves stronger long-term by letting that player go. I'm less convinced with his point on the 2015 Mets:

Many organizations fall in love with their pieces and fail to see the big picture, the full roster and what is good for the short and long term.

The Mets, for example, used their young starters to get to the 2015 World Series. But then refused to use the strength to diversify the roster and payroll while attacking weaknesses. Matt Harvey blew up, Zack Wheeler (who didn’t pitch in ‘15) left in free agency, Steven Matz and Noah Syndergaard remain in diminished fashion as they enter their walk year in 2021. Jacob deGrom was signed long term and is arguably the ace of the whole sport. But think about what might have been built around him with greater boldness/vision when it came to being open about trading the most fragile entity in sports, especially because the Mets — with all the complaints about Wilpon budgets — could have been operating this way with a far larger payroll than Tampa Bay.

Basically, the starting pitching that the Mets had in 2015 is what made them special as far as I'm concerned. That, and Yoenis Céspedes getting incredibly hot for a couple of months and Daniel Murphy carrying them in the NLDS and NLCS. They really weren't a deep team, and trading away starting pitching for position players would have made them stronger in one area while weakening them in another.

On the other hand, if they had a front office that was better at analyzing what they had, they might have tried a little harder to keep Murphy and sold high on Steven Matz. But their roster was so shallow back then, they were always just a couple of injuries away from going down the tubes, which is what always seemed to happen.

What I would hope to see in the future that would be more Rays-like would be decisions made on keeping players like Michael Conforto and Noah Syndergaard before they headed into their walk years. Evaluate whether they fit into the program long-term, or consider trading them for some sort of prospect haul. Because that didn't happen before the new regime took over, they need to make complicated decisions on both players with little margin for error. Either extend them before the season starts or likely compete against other teams for their services after 2021.

With Syndergaard, his return from Tommy John really complicates the decision even further. He's looked like a true ace at times, but never seems to completely put it together. He missed most of the 2017 season and all of this past season. He's only made 30 starts twice in his career so far. Honestly, I could see a scenario where Syndergaard has some great seasons as a #1 caliber starter, but I could just as easily see him spending the next few years battling injuries and never really reaching that potential. It seems likely that some team will be willing to throw a pretty big contract at Syndergaard based on his potential, so Sandy Alderson, Jared Porter and Zack Scott have some quick evaluating to do on the big right-hander. With Syndergaard not returning before June, it seems quite unlikely that any decision on extending the big righty will happen before the season starts.

After reading Sherman's column, I spent some time thinking about my own feelings about Syndergaard. Intellectually, I do question whether he really is a guy worth investing many millions and several years into. Emotionally, however, I'm haunted with the thought of Syndergaard playing for another team and achieving his potential in the way that Daniel Murphy did. Whatever the reality of Syndergaard has been, the idea of Noah Syndergaard, sharing shirtless workout pictures on social media and throwing fastballs by hitters is tough for me to picture in another uniform. I do hope the Mets keep him if the current front office decides that's the right move, but I'm quite happy to leave the decision to minds better qualified and less emotionally involved than my own.

Even the decision on Michael Conforto will surely be complicated. Conforto had a really good year in his age 24 season in 2017 with an outstanding batting line of .279/.384/.555 and an OPS+ of 148. But he seriously injured his shoulder that August while swinging the bat, and his 2018 and 2019 seasons were really good, but not as good. Then, in the pandemic-shortened 2020 season, Conforto bounced back to a star level .322/.412/.515 line and a 156 OPS+. If you're a glass half empty sort, you could dismiss Conforto's 2020 numbers as small sample size success. If you're the glass half full type, you'll note Conforto's hit to all fields approach and possibly no longer being hindered by leftover issues from that shoulder injury.

Again, as a fan I definitely want Michael Conforto to remain with the Mets after this season, but undoubtedly at least some of that desire is purely emotional. I'm glad that this decision is in the hands of the Alderson/Porter/Scott team that will be basing that decision on data. But I still hope going forward that decisions like this don't get tabled until the players walk seasons are at hand. If a player isn't going to be in the club's future, do what the Rays do and make that decision when the player can bring back some value.

Okay, I'm out for today. I hope you have a terrific holiday, and I'll see you back here in 2021. Please stay safe, be well and take care.