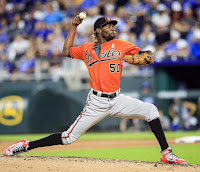 Given the scattershot nature of spring training telecasts, it's been difficult to judge the performance of Mets pitchers so far. This is particularly the case for relief pitchers, who you're only going to see for an inning, even when a game is on tv. That holds true for Miguel Castro, the young pitcher acquired from the Orioles by Brodie Van Wagenen last season. I've personally only had the opportunity to watch the man pitch once. I liked what I saw, but I understand that it's folly to extrapolate a good inning into a potential full season's performance.
I remember when the Mets picked up the then 25-year-old Castro at the end of August last season, I wasn't impressed. It was already fairly apparent by that point that the Mets were not a legitimate playoff contender. Despite his relative youth, the Mets were Castro's fourth Major League team. His strikeout numbers with the Orioles were not impressive. In 226 innings over three seasons in Baltimore, Castro only averaged 6.6K/9IP. That's a meager number for a reliever. Even more concerning, he issued walks at the unacceptable rate of 4.7/9. In a bullpen that was already infamously wild, adding another rightie who couldn't throw the ball over the plate seemed ill-advised, to say the least.
Miguel Castro only pitched 9 innings for the Mets last September as they stumbled their way to the conclusion of another playoff-less season. He struck out 14 batters, which was certainly promising, but he also walked an astonishing 8 batters and gave up 11 hits. A WHIP of 2.111 will earn any reliever little more than a ticket on the last train to Palookaville but, despite those poor numbers, Castro looked interesting.

For a time this offseason, it seemed that the Mets might be trying to construct a super-bullpen. They signed Trevor May, went down to the wire with Brad Hand, and were rumored to be in pursuit of some other top firemen. In the end, however, May and lefty Aaron Loup were the only significant names signed.

Meanwhile, the Mets were also bringing in a bunch of interesting arms with the idea of finding some gems among that group. It's not an indefensible way to construct a bullpen. Still, it's only going to work if pitching coach Jeremy Hefner and his fellow instructors could help at least a couple of these guys take the next step in their development as pitchers. That, of course, still remains to be seen. The proof will play out against real competition in April and May as the 2021 Mets bullpen comes into focus.

Miguel Castro looks like a guy who may be ready to take a step forward and challenge for some late-inning high-leverage relief action. Greg Joyce had a piece in the New York Post today about the young pitcher, who may be ready to start earning some more important innings for himself. He's only walked one batter over three one-inning outings. He's struck out 2 and not allowed any hits. Without going too crazy about 3 innings in March, it's fair to say that Castro is certainly making a case for himself in the early going.
I thought coming into this spring that a spot in the Opening Day bullpen was Castro's to lose, figuring that displaying the same wildness from last September could take him out of the mix. All things being equal, though, I felt that he had enough of a track record to at least stick as a middle relief option. That he's done so well is legitimately a good sign for the future.
Castro is an interesting pitcher. Listed at 6' 7" and 205 lbs., he looks a bit skinnier than that. Watching him pitch, he looks all arms and legs, which can work well for a relief pitcher. Of course, guys that tall have more work to do to maintain their delivery, which could explain the problems with walks. Manager Louis Rojas was quoted about Castro in Joyce's article, citing increased experience and the improvement of one of his pitches as reasons for Castro's promising spring:

"He’s still so young and his abilities are special. Last year coming over to us, it's just another stepping stone in his career where he's learning. He's more mature, he's more experienced. I think he’s slowed down a little bit some of the things he needed to get better at. That's what he's doing right now in this camp."

"This changeup is a lot better. Last year, he even said it to me a couple times over the phone that he wanted to work on everything, but specifically getting lefties out more. So his changeup right now is in a good place. He threw a couple and they looked really good. So the command, along with a third pitch that he can bring with the fastball-slider mix that he usually showed last year, is what I've seen."

Now, I'm not sure that I buy the "more mature... more experienced" bit. That sounded like manager-speak to me. Castro had accumulated over 270 Major League innings before he got here. He wasn't unsuccessful, but his success was uneven. The talent was obviously there. That's why Toronto, Colorado, Baltimore, and the Mets have given him the ball since he was 20 years old.

Just looking at the stat lines, his evolution as a pitcher has been interesting. He began pitching substantial innings his first two seasons in Baltimore in 2017 and 2018. In 152.2 IP over those two years, he allowed 7.5 H/9, which is very promising, but the 5.6 K/9 would make me think that I was looking at the numbers of a soft-tosser.

Castro's strikeout number picked up to 8.7/9 in 2019. While hardly elite for a relief pitcher, that indicates some significant change in how he attacked hitters. Then last season, with both the Mets and Orioles, he had an impressive 13.9 K/9 rate, marred, of course, by too many walks. Looking at his page on BaseballReference.com after the trade was announced, I honestly didn't know what to expect.

What I've learned by watching him since then is that Miguel Castro is an interesting pitcher with some obvious talent who might very well turn into an excellent reliever for the Mets. Or, conversely, he can continue to walk too many batters once the harsh spotlight of the regular season shines upon him, and next thing you know, Castro becomes the answer to a trivia question a few years down the road.
I've seen dozens of Miguel Castros come through Queens over all of the decades I've watched the Mets: kids with all of the talent to succeed but struggling to put it all together and build a meaningful Major League career. By far, most of them have not succeeded — at least they could not sustain a level of success for more than just fleeting bursts of time. They could never quite figure it all out.
After years of Wilpon's relentless penny-pinching, it's wonderful to have an owner willing to spend money on better players and better tools for developing good players. It gives me real hope for a future that looks nothing like the past two decades of mostly frustration and disappointment. As wonderful as that is, though, it's going to take more than just writing checks to achieve Steve Cohen and Sandy Alderson's stated goal of sustained success.

It's going to require the kind of organization that can take a Miguel Castro and/or a Sam McWilliams and help them put it all together to be a real contributor. And/or maybe they take a Dellin Betances and/or a Jeurys Familia to recapture some of their past magic. And/or help a Jerad Eickhoff and/or an Arodys Vizcaíno get past injuries that derailed once-promising careers and become Major League contributors again.

It's fantasy to believe that all of these things will happen but, for both the upcoming season and the future of this franchise, it's crucial that one or more of these stories has a happy ending. It's how smart teams get on top and stay on top. They find the value in pieces that other teams couldn't actualize and take players they already have and help them be better. A good part of the reason that the Mets haven't known much success is simply that they haven't been very good at doing these things for many years.

When I watch a player like Miguel Castro with both interest and hope, any success that player enjoys makes it easier for me to see the Mets building something really great for the future. After decades of mediocrity and worse, that's something that I could really get behind.