The Rat Made Him Do It 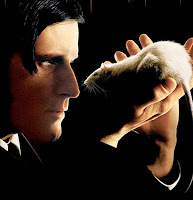 Francisco Lindor finally came through with a huge hit for the Mets to get them back even in a game that seemed all but lost in the second inning. Then the Mets managed to win the damn thing in extras, bringing their record back over .500 for the first time since April 25. Patrick Mazeika, a 27-year-old rookie who was the last position player on the bench, got the game-winner by staying alive long enough to tap a fair ball slowly enough for Pete Alonso to score from third. (Alonso got a terrific jump on the play for which he deserves credit. You don't have to be fast to be a good baserunner.) All of this, along with some good relief pitching and heads-up defense, should be the story of the Mets stirring 10-inning win over the Arizona Diamondbacks last night, but instead, all of the post-game oxygen seems to have been taken up by a phantom rodent.

It was pretty obvious to everyone that Lindor and Jeff McNeil had some sort of a dustup in the tunnel behind the dugout after the top of the seventh inning when there was some miscommunication over a ground ball that led to an infield hit for light-hitting Nick Ahmed. It wasn't anything all that unusual, given the pressure of playing Major League Baseball in New York City, particularly when both players are unhappy with their offensive production over the first 27 games of the season.

Everyone understands that Lindor is feeling the extreme heat from trying to live up to that huge contract and hearing boos for his atrocious start. McNeil has also been struggling with an unsightly slash line of .226/.330/.333 in the early going. While that's certainly better than Lindor's meager .175/.302/.247 line, McNeil isn't a Gold Glove-caliber defender on a 10-year multimillion-dollar contract.

I like McNeil a lot and expect him to rebound, but he understands all too well that he'll start losing playing time if he doesn't give the Mets the high-average offense that's expected from him. The 29-year-old McNeil had a late start in the majors and isn't even eligible for arbitration until next year, and won't be a free agent until his age-33 season. Now that's pressure to perform. So you could understand why a couple of teammates enduring a rough stretch could temporarily lose it in a petty squabble. Anyone who's been part of a team — if not athletic, then in other areas of life — understands that sh*t happens.

I played sports for many years and had plenty of teammates. I liked some of them, tolerated most of the rest, and disliked a few. This was, of course, far from the glaring spotlight that shines on these guys, but I understand it very well. Chances are we all have had experience working in places where we had similar mixed feelings about our coworkers. We may have even had a less-than-pleasant exchange with one or more of them, but chances are there weren't any reporters hanging around looking to write about those little unpleasant moments. Even at home, while Lisa and I get along amazingly well most of the time, I've been known to rub her the wrong way now and then. It happens.

I watched some of the Mets Postgame show and caught Lindor's strange fantasy explanation for what transpired between him and McNeil. My take was that he was trying to defuse the situation with obvious, if a bit heavy-handed, humor. I immediately felt he was making a mistake.

A couple of things here. As I said, even teammates who get along are going to have some spats at times. Reporters are free to ask about them, but players aren't going to talk about these things in any depth. That's the code of any locker room.

The correct way to handle it is with clichés and platitudes. You own up to a disagreement, take responsibility for the matter, and move on. Indeed, Lindor took all of the blame for not making the play, even though McNeil was partly responsible. But he also should have said something like, "Jeff and I had a little disagreement, but we worked it out."

I could tell during the QandA that the Post's Ken Davidoff was put off by Lindor's tale of the rodent-induced kerfuffle. Sure enough, Ken had a column about it today accusing Lindor of unnecessarily introducing more drama into the situation with his deflections. Davidoff, who these days often chooses to strike a pose of scolding uncle and/or profit of doom, will not forget Francisco Lindor's unfortunate attempt at levity:

Because no matter what happens with Lindor, his 2021 OPS now up to a still-underwhelming .549, moving forward as a Met, we're unlikely to forget this night. Can he pull off this maneuver by regaining his All-Star form and embracing the absurdity of his rat tale? Or will his struggles and tensions reemerge, his storytelling turning into a point of mockery?

The obnoxious unspoken take behind this is, of course, "Derek Jeter wouldn't have handled it this way." And he probably wouldn't have. For that matter, David Wright wouldn't have gone down that road, either. But everyone is different. Even though Lindor generally does a great job with the media, we sometimes forget how young 27-years-old really is. He's had a lot to deal with this past month or so, and it momentarily took him down a road that he would have been far better off not taking.

If some in the media like Ken Davidoff want to mutter "bah, humbug!" and hold a grudge, so be it. If Lindor is smart, he might actually talk to the reporters today and own up to not handling things very well with the whole rat fantasy. That's up to him. But either way, I'm pretty sure that last night's misstep isn't going to sink his Mets career.

I actually hope that last night's events might prove the impetus this club needs to move on forward from this disjointed and dispiriting first month of the season. Sometimes a good kick in the ass is required to transition into a better place.

Too often already this young season, we allowed ourselves to be hopeful at some positive signs, only to see the Mets fall back into some Groundhog Day-like wormhole where they seem to keep losing the same game over and over again. Will this time be different? If so, maybe Lindor's chimeric rat will have provided some of the badly needed magic to lift the Mets into a happier reality.