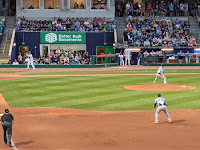 The Mets' decision to bump the rehabbing Scherzer's start back a day worked out well for this fortunate blogger.
When I heard the news that Max Scherzer was scheduled to pitch a rehab start in Harford, CT Tuesday night, I texted several friends to see if they wanted to go to the game with me. I live about 25 miles from Hartford. Unfortunately, by the time I found a willing accomplice, tickets to the game were sold out. I was disappointed but still wanted a chance to see Francisco Álvarez, Brett Baty, and Ronny Mauricio in action, so I bought tickets for the Wednesday night game. As luck would have it, the Mets decided to move Scherzer's rehab start back a day, so I would be watching Max and the three prospects that evening.
Scherzer's first inning passed without drama:

In Hartford for Scherzer's rehab start. Not the best seats, but that speck in the distance is Max walking off after a 1-2-3 first inning pic.twitter.com/vpjD5p3j13

Max allowed his first baserunner on a 1-out single in the second inning. Scherzer wasn't making any attempt to hold the runner, so the runner stole second. Scherzer escaped any damage that frame by retiring the next two batters.
In the third inning, Francisco Álvarez lived up to all of his hype with this blast to LF:

The top @Mets prospect goes deep for the 18th time for @RumblePoniesBB. pic.twitter.com/B9aYJmGsaI

Things got more interesting for Scherzer in the bottom of that frame. He allowed a 1-out double. He struck out the next guy for the second out, but the ball was in the dirt, and Álvarez had to throw the batter out at first base. The runner on second advanced to third on the throw but was stranded there when Scherzer retired the next batter for the final out.
Scherzer wasn't throwing his slider for strikes in that inning. He bounced a couple in the dirt. He got some swinging strikes on balls that major league hitters likely wouldn't swing at.
Scherzer's final inning was the fourth. He gave up three runs in that frame, allowing 2 hits and a walk. There was also a pair of errors by Binghamton that inning. The first was a really bad one on a routine ground ball to Brett Baty. He fielded the ball cleanly but just dropped it when he was transferring it for the throw. The second was a throwing error by Álvarez on a throw to second base. It bounced but wasn't that tough of a play for the infielder, who allowed it to get past him into center field.
A couple of the hits in that inning looked like plays that might have been made by a better infield. Baty let another ball get by that was hit hard but right at him. No one in the Binghamton infield showed much range except Mauricio. It shocked me that a ground single that went between the first and second baseman wasn't fielded. The ball wasn't hit very hard.
Scherzer wound up pitching 4.1 innings and allowing 3 runs, 2 earned. Max had good velocity on his fastball: 95-97 mph, as reported by the scoreboard. Not sure how accurate Hartford's radar gun is, but those fastballs looked like they had good life on them.
Scherzer didn't seem to have good command of his off-speed pitches, although that seemed to get better as the outing progressed. When Max makes his next start with the Mets — the sooner, the better, obviously — I'll be paying attention to whether he's sharper with his slider and changeup.
Hartford also ran wild on him, as Max just didn't make any effort to hold runners. I'm sure his game plan was to concentrate solely on executing pitches. But if there were major league advance scouts at the game, it wouldn't surprise me if teams didn't try to test Scherzer by running on him when he's back with the Mets.
Overall, I was pleased with Max Scherzer's performance Wednesday night. Unless he has a physical setback, it seems to me that his next appearance should be with the Mets. We can hope.
As for the three prospects, Álvarez's bat looks as advertised. Ronny Mauricio went 3-4 with 3 singles. That part was good. What wasn't good was getting picked off twice — one by the pitcher and the other on a snap throw from the catcher. Ronny's one at-bat without a hit was a strikeout where he chased a bad pitch for the third strike, showing some of his infamous tendency to get himself out at times. As for Brett Baty, he went 0-3 with a walk and a pair of Ks at the plate. His play at 3B was bad. Besides the error, he failed to make a couple of plays that he really should have made. His range seemed quite limited. He didn't look like a major league third baseman to me at all.
CF Brandon McIlwain was another kid who did impress me in this game. He's a really good natural athlete, looks good in the field and at the plate, and has been hitting well this season. McIlwain had a well-hit double in 5 ABs in this game, only 1 K. Not a great game stat-wise, but he just looked like someone to keep an eye on.
Take these observations with a grain of salt. It was only 1 game, and I am not an expert evaluator. These observations are my own, as are any opinions expressed.
I'll finish up my Decisions, Decisions series next time. Until then, please be well and take care. Let's go Mets!
Follow me on Twitter @MikeSteffanos.
By Mike Steffanos at June 30, 2022

Andy Martino w/o the TV makeup For now, it's speculation about whether Jacob deGrom really "likes" pitching in New York. Troll...