The Sun (and the Mets) Will Rise Again 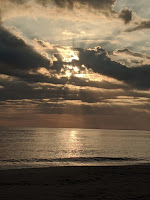 Don't give into the despair that some pundits wish to inflict on Mets fans. There are tough decisions to be made, but the future is still bright.
The New York Mets' 2022 season came to a disappointing end at Citi Field Sunday night. In their first playoff appearance since 2016, the Mets didn't look much like the club that won 101 games in the regular season. This is too bad. They were an entertaining team to follow this summer, but they will likely be remembered for a couple of consecutive bad weekends in October.
Much of the coverage of the team was harsh and apocalyptic. Ken Rosenthal had a truly terrible piece up in The Athletic about the Mets that surprisingly went up after they won Saturday night's game:

Watching Saturday night's 4-hour, 13-minute slog, the tying run coming to the plate after his team took a 7-2 lead into the ninth inning, Mets owner Steve Cohen can be forgiven if he thought, "What the heck did I get myself into?"
His 101-win team will need to stave off elimination a second time simply for the right to face the Dodgers, the best team in the sport during the regular season. Once the Mets' playoff run ends — and the best guess is it will be sooner rather than later — the task will get even tougher. And the way Cohen reacts to his team's performance in October figures to have major consequences in Queens and beyond.

Three teams were swept out in the playoffs — including the St. Louis Cardinals, which writers like Ken endlessly tout as one of the best orgs in MLB  — but none of them received this sort of treatment that the Mets did after winning a game to stay alive in their series. How dare the Mets allow the tying run to come to the plate! Wait, didn't the sacred Cardinals actually blow a ninth-inning lead in their series? I'm just going to share how I reacted to this from a thread on Twitter:

Once the Mets actually were eliminated Sunday night, Joel Sherman posted his own version of this, titled "Nothing to feel good about anymore as Mets painfully spoil win-now season." You can get the gist of the article from the title, so I'll spare you the rest unless you decide to wallow in a little extra post-season pain. At least Sherman waited for them to be eliminated before piling on the doom and gloom. Frankly, I was feeling pretty crappy after the Mets basically no-showed on Sunday night, but reading this stuff actually brought me back from the edge.

The Mets receiving harshly negative coverage is nothing new. Frankly, they did suck both in their weekend series against the Braves and their Wild Card matchup against the Padres. But, somehow, the pain of having to watch those games wasn't enough for guys like Rosenthal and Sherman, who have to carry that gloom over into the future. Such is the life of a Mets fan, to always get served up an extra dose of negativity.

For myself, I try to avoid giving in to these feelings. I've waited so many decades for the Wilpons to get out of the picture. I'm not going to allow myself to be overly pessimistic about the future. And yes, the Mets have many decisions to make this winter. Next year's club will look quite different from this year's, beyond a doubt. And I'll go so far as to concede that the chances of them being able to match the win total of the 2022 Mets is not good. The Dodgers are able to sustain 100+ win success thanks to the stability and staggering depth of their organization. The Mets have only begun trying to build their own perennial winner.

As Steve Cohen has stated in an interview, $300 million in payroll "should be able to build a pretty good team." Meanwhile, the Post's Mike Puma has estimated that it would cost almost $350 million to keep the band together or replace some with equivalent talent. I can't fault Cohen for not being willing to increase the payroll that high. It rankles somewhat that Robinson Cano will be taking a nice chunk of that in his final season of not playing for the Mets, but at least that sunk cost will only hamper the club for one more season.

So yeah, if you're looking for a reason to feel bad about your team's future, contemplate the magnitude of the job to either keep or replace so much of this year's roster. And that doesn't count James McCann, who will be making over $12 million in both 2023 and 2024. All things being equal, he'll go into spring training behind Tomás Nido. If the Mets decide to keep Francisco Álvarez around, there's really no room for McCann. And if McCann beats out Nido, Tomás has no options remaining to be sent down. Tough decisions loom.

For what it's worth, the Mets absolutely need to begin getting younger. That may involve living with some growing pains for Álvarez and Brett Baty early next season, but I genuinely think the Mets should do that. Provided, of course, that neither prospect looks overwhelmed by major league pitching. I'd also like to see them give David Peterson and Tylor Megill a shot at a regular rotation slot. They both have plusses and minuses and injury concerns, but they're the only two younger pitchers that the Mets have on hand that are ready for the majors.

I find the constant speculation about Jacob deGrom exhausting at this point. I don't know if he wants to stay or not. If Billy Eppler and his front office feel that retaining deGrom is the right move for the Mets, they undoubtedly have the resources to offer him a fair contract. If deGrom prefers to go elsewhere or the bidding gets out of hand, then it might be time to move on. For myself, I would love to see deGrom continue to pitch in New York. He is a face-of-the-franchise type of player. Teams should do everything in their power to retain these guys. But there are common-sense limits to any signing, both in dollars and in years.

I don't fault Steve Cohen and Billy Eppler that there are so many key free agents this winter. They inherited this mess. But the effort to build a stable, winning organization demands that the club starts locking up some of their key players before free agency. That should be a goal for the future. After the free agent frenzy this winter, the Mets need to take a hard look at signing Pete Alonso to a reasonable contract. Pete doesn't become a free agent until 2025, but you can't wait until the last minute with these guys.

I would do the same with the uber-valuable Jeff McNeil. He also becomes a free agent in 2025. Because of his late start in the bigs, McNeil will be 33 in 2025. Jeff can presumably be enticed with a reasonable contract, particularly in length, and that would seem to be a good investment.

As previously stated, the sheer amount of turnover this offseason almost guarantees that the 2023 Mets win fewer games than the 2022 club. But the goal of being a playoff team shouldn't change. Maybe they can even win a round next season. If you want to engage in the extreme pessimism that national and local writers seem to wish to inflict upon Mets fans, I won't try to stop you. Wallow in all of that pain. For myself, I put aside my disappointment from these last two weekends and still believe in the future of this team. With a front office committed to realizing the vision of an owner who is invested in creating excellence here in New York, I still feel good about the future of this team.

I'll be back to write about all of the off-season decisions in more detail. In the meantime, sincere thanks to the small band of loyal readers that give me the incentive to keep writing in this space. I'm going through a tough year in a lot of ways, but that only makes me appreciate the good things even more. Although training to become employable again hasn't left me all of the time I might wish to write, I will continue to get new material up weekly. Maybe even more often, if things lighten up a bit timewise.

As always, be well and take care. I wish I could follow that with the usual, "let's go Mets," but that will now have to wait until next year.