Going Down With the Ship 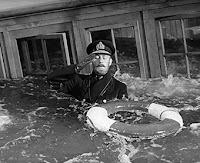 Rob Manfred is no longer 100% confident that there will be a baseball season in 2020? Join the club, my friend. It's amazing how bad negotiations can go when the primary method of negotiating is by leaking stuff to the media.

Manfred did an interview with ESPN's Mike Greenberg today, and the optimism that he was exuding last week apparently has disappeared. He was asked about the optics of the ongoing squabble with the players while the country is trying to come back from the pandemic:


"It's just a disaster for our game, absolutely no question about it. It shouldn't be happening, and it's important that we find a way to get past it and get the game back on the field for the benefit of our fans..."

Manfred said the MLBPA's "decision to end good-faith negotiations" and the need for an agreement with the union on health and safety protocols "were really negative in terms of our efforts."

I'm not going to get into a debate over whether sending the players proposals that varied very little from each other was "good-faith" negotiating. What I will say is that, if it's really important for Manfred and MLB to "find a way to get past it and get the game back on the field", then perhaps it's time to actually get the two sides together in the same room and try to come to some sort of an agreement.

Both sides have taken turns at accusing the other of bad-faith negotiating, and now I'm sure everyone's fee-fees are hurt. Enough name-calling and negotiating through the press, if Manfred really believes that the 2020 season is in danger and does not try to engage the union face to face, then he can't pretend that he's really trying to find a way through. If the players are resistant to meeting, then we'll all turn around and blame them for everything. But Rob, you're the freaking Commissioner of Baseball. The ball is in your court, dude.

Since Bud Selig took on the job, the Commissioner's office has lost the pretense of being on the side of the game of baseball and trying to at least appear impartial. And that's a problem here, because it's hard to command both sides to sit down face to face when you're clearly on the management side. Manfred is pretty handy at coming up with pithy quotes blaming the union for all of this, but he's the captain of this ship and blaming the other side isn't going to keep it from sinking. If being the Commissioner of Baseball still means anything, then it's time for Rob Manfred to step up and make a last ditch stand at getting the sides together. He can point fingers all he wants, but if baseball fails to make it to the field in 2020, Manfred will be remembered as the Commissioner who let it happen.

I'm so tired of writing about this. When the players put the ball in MLB's court to set a schedule I was hoping that these non-negotiations would come to an end. Now apparently that won't be the case. I love baseball, but I'm almost ready to throw my hands up and decide which Australian Rules Football team to adopt so I can turn my back on all of this crap.

An item came across my SportSpyder Mets feed today that put a cherry on top of all the good feelings I was having from the negotiations. On AMNY, Joe Pantorno cites an unnamed source that Fred and Jeff Wilpon will not continue to put money into the Mets if they are unable to sell the club. The source was quoted:


"They run such a cheap operation... Given the fan base and market, they should be spending two times more than what they are... They are doing just enough to keep the fans coming, nothing more."

This bummed me out a little, not because it came as any surprise but rather I haven't spent much time thinking about it lately. I don't think any of us who have been following all of this would expect much out of the Wilpons if the team doesn't sell. They were in bad shape with the Madoff debt when things were going really well for baseball. With the hurting that the pandemic has put on everything, I doubt that the Wilpons would have much to spend if they really wanted to spend. Given their struggles and the fact that they will not keep the team any longer than they have to, there is no reason for them to do more than the minimum.

Given the current pandemic, the uncertainty of baseball returning this season, and the all but certain ugliness coming when the current agreement expires after next season, it seems quite unlikely that the Wilpons will be getting top-dollar offers for the club. The real question is whether any of the bargain shoppers currently circling the team are willing to give the Wilpons enough to convince them to part with the Mets. If not, they may very well decide to tread water with the team and hope that both the times and the offers improve.

I think there's a real danger of a multi-year down period for baseball coming up. They're alienating the fans with the bickering. Times will probably be tough for at least a period of time after they come out with a vaccine for this virus. Then if there's a baseball strike in 2022, as the great Keith Jackson used to say, "Whoa, Nellie!" Baseball may endure enough self-inflicted wounds that it finds itself knocked down a few pegs.

I find myself rooting more and more for A-Rod and Jennifer Lopez to find investors for their plan to buy the club and create an entertainment venue around it. It sounds smarter and smarter to me to have a plan that envisions baseball as just a part of a greater whole. It may well be that the entertainment facet winds up propping up baseball if MLB continues down this disastrous path.

I'm out. I'm praying for some good news on baseball to write about here soon, but it's hard to maintain that hope these days. Thanks for stopping by here. Stay safe, stay well and take care. Keep good thoughts.