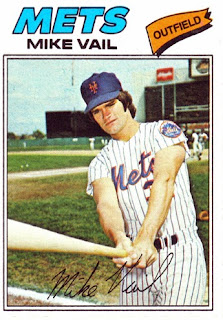 Following their improbable trip to the 1973 World Series, there was very little that was memorable about the 1974 season for the New York Mets. They lost over 90 games for the first time since 1967. They still featured a strong starting rotation headed by Tom Seaver, Jerry Koosman and John Matlack, but fourth starter George Stone had come back down to earth after tearing his rotator cuff, the bullpen wasn't great, and the offense was terrible.

They made a couple of deals after the season to try and improve their offense. The big one saw the club ship 1973 hero Tug McGraw along with Don Hahn and Dave Schneck to Philadelphia in exchange for John Stearns, Del Unser and Mac Scarce. The other shipped out backup infielder Teddy Martinez to the Cardinals for utility infielder Jack Heidemann and a well regarded OF prospect named Mike Vail.

The 1975 season was a bit of a bounce back for the Mets, finishing 82-80 in third place in the NL East. Tom Seaver rebounded from his worst season as a Met to win his third NL Cy Young award, the bullpen was stronger and the offense was improved. Unser had his one solid season as a Met, Rusty Staub had over 100 RBI and new acquisition Dave Kingman hit 36 home runs. One of the real bright spots for the Mets that year came when OF prospect Mike Vail came up in mid-August and put up some strong offensive numbers.

He didn't come out of nowhere. Vail had put up strong numbers in the minors for the Cardinals in 1974 and for the Mets Triple-A Tidewater team prior to his call-up in 1975. In just over 400 AB for the Tides Vail slashed .342/.394/.494 with 7 HR and 79 RBI. That kind of power probably wouldn't cut it for a corner outfielder today, but back then was acceptable, particularly with a high batting average.

What was a bit of a red flag were Vail's strikeout totals. He struck out 105 times in the Cardinals system in 1973, 95 times in 1974, and 74 times in Tidewater before his callup to the Mets. By today's standard those aren't crazy totals, but in a contact-oriented era, combined with Vail's fairly low home run totals, those numbers stick out. You didn't have as many young pitchers throwing mid 90s heat in that era as you do today, and hitting triple digits in strikeouts was only acceptable for big home run bats.

Mike Vail got a hit in his first major league AB in a loss to the Astros on August 18, 1975. The hit was against J.R.R. Richard, one of the best pitchers in the game. The Mets gave him a lot of starts, wanting to see what they had, and he rewarded them by producing with the bat. In a series against the Padres in San Diego on August 25, 26 and 27, Mike Vail went 9-14. The Mets swept the Padres, and a legend was born. Vail had hits in his next 20 games. That 23-game hitting streak tied Mike Vail for the longest rookie hitting streak in modern major league history, and was also the longest streak in Mets history.

Vail kept on smoking the ball through mid-September, batting .352 on September 15. He tailed off a bit the last two weeks of the season. An 0-4 in a loss to the Phillies took his average down to .299, but he went 2-5 on the final day to get it back up to a more satisfying .302.

Mets fans like myself were excited that our all too often offensively starved team had a young player that looked like he could really hit. Mike Vail got a level of hype for his performance in 162 AB that probably wouldn't happen if he did it for a better offensive club. No one cared that he struck out 37 times in 162 AB, even though that number was pretty high in those days for a guy who slugged .420.

The Mets lost 98 games in 1977, the first year of an abysmal stretch of pure suckitude that wouldn't end until 1983. As bad as they were, Vail had a weak spring training in 1978 and was waived by the Mets. He landed briefly in Cleveland, then was traded on to the Chicago Cubs in July. It was there that Mike Vail enjoyed the best sustained stretch of good play in his career.

From July 1978 through the end of 1980, Mike Vail had a part-time gig with the Cubs as a platoon OF. He batted .333, .335 and .298 over those three seasons. In a combined 671 AB over that time, Vail hit 17 HR and 115 RBI. Certainly by the numbers Vail was thriving in that role with the Cubs, but apparently he was not loved by his managers there. Herman Franks, who managed the Cubs in Vail's fist two seasons, labeled Vail "a constant whiner". Vail apparently was not happy about his part-time role with the Cubs. Franks went on to say about Vail, "I just got tired of being around him. There isn't enough money in the world to pay me to manage if I have to look at that face every day."

Vail continued to perform after Franks departed, but lost playing time at the end of 1980 and left the Cubs as a free agent following that season. Vail signed with the Reds in 1981. He only accumulated 220 AB over 2 seasons in Cincinnati, slashing .241/.259/.350 with 4 HR and 32 RBI.

Vail started the 1983 season with the Giants, but was traded to the Expos on May 25. The 31-year-old was productive in a limited role with the Expos, primarily as a right-handed pinch hitter. in 53 AB he slashed .283/.387/.434 with 2 HR and 4 RBI. Interestingly enough, both HR came off of Steve Carlton.

The Expos cut Mike Vail the following spring. He played briefly with the Dodgers in 1984, then spent some time with their Triple-A Albuquerque club. That would be it for Mike Vail, his career over at age 32.

In a lot of ways it was quite ridiculous how much hype Vail generated in that month-and-a-half at the end of 1975. The Mets had produced so few good young hitters from their organization, and the fans were hungry for one to hang their hopes upon. Plus he had that hitting streak that generated a lot of excitement. It's still the fourth longest streak in Mets history, behind Moises Alou (30) and Mike Piazza and Hubie Brooks (24).

I'm not sure that Mike Vail's career would have turned out much differently had he not hurt his ankle over the winter of 1975-1976. At the time I used to fantasize that he would have established himself as one of the best young hitters in the game if not for that injury, but the man never put up great numbers against right-handed pitchers. For his career he slashed .259/.292/.377 against them, vs .299/.334/.424 against lefties. It seems like the Cubs had the right idea in how to use Mike Vail, primarily in a platoon situation.

It's interesting that he didn't stay in Chicago despite performing very well for them. I take the comments of former manager Herman Franks quoted above with a grain of salt - if you follow the link to the article cited Franks seemed to dislike several of his players. Still, that was a time where a manager didn't feel the need to cultivate a nurturing relationship with his players, and if Vail was a frequent complainer about his part-time status that would explain why he exited Chicago after only two-and-a-half seasons at the still young age of 28 years old.

It certainly didn't work out for Vail after leaving Chicago. He only received less playing time after departing, and never again put up the strong numbers he compiled with the Cubs. In somewhat of a twist, the at bats Vail used to get with the Cubs as a right-handed outfielder went to another former Met in 1981 and 1982, Steve Henderson, who was traded to Chicago to bring Dave Kingman back to New York.

If the Mets had been a better run organization, Mike Vail would have had a more normal introduction to the big leagues. Maybe the Mets would have figured out how to get the most from him in a role similar to the one he excelled at in Chicago. Instead, they let a potentially useful player get away for absolutely nothing. They were so poorly run back then, which explains why they only made the playoffs twice despite having Tom Seaver, Jerry Koosman and Jon Matlack in the rotation. And it explains why they were terrible for so long until new ownership and new management could finally turn it around.

One final note of interest about Mike Vail. In 1971, after being signed by the Cardinals, Vail played with a young catcher named Randy Poffo. Poffo would leave baseball and go on to a successful career in professional wrestling after adopting the ring name Randy Savage and the nickname "Macho Man."

That's it for me today. Thanks for stopping by and spending some time here today. Please stay safe, stay well and take care.