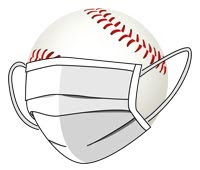 Maybe it's fitting considering the compressed baseball season this year (we're already 3.33 percent of the way through the regular season), but the Mets treated their fans to quite an emotional roller coaster over the first couple of days playing ball. Opening Day offered up all of the joy and promise of a new baseball season, then yesterday reminded us how baseball can string you along until you're almost at the finish line, then just yank it away from you in an instant. The bottom line: one strike away from a series victory and a 2-0 start, then crashing back down to .500 in an instant.

What bothers me is that yesterday's game felt like a giveaway - not so much from Edwin Diaz's one mistake, although that was heartbreaking enough - but the way the Mets failed to capitalize on opportunities to extend their lead, win the game outright in the bottom of the ninth, then fizzle out on a bases loaded, no outs last chance in the tenth. Offensively these last 2 days, they've been as flat as a pancake.

I'm not going to read a ton into that. We knew with such a short summer training and only two exhibition games, the pitchers were likely to be ahead of the hitters. I can't say that I think the Mets should have done something different to prepare these last three weeks. No one had any experience in preparing for the season with such a short lead-up. Every team was figuring it all out as they went along. As a Mets fan, I can only hope that they can figure things out pretty quickly and start living up to their offensive potential.

We're still a long way away from making any informed judgement of Luis Rojas, but I liked what I've seen so far. He's not been hesitant to move Robinson Cano down in the order or substitute for him late in the game with a lead. I like the bullpen moves that he's been making so far. I don't hold Hunter Strickland's bad performance yesterday against the manager - as much as I like the top 5 guys in the Mets' bullpen, the rest of it is a crapshoot right now. For all of that, though, I wouldn't expect to see Strickland used in a close game anytime soon, based on his effort yesterday.

The Mets offense is tough to watch right now. Key hitters such as Jeff McNeill, Pete Alonso and J.D. Davis haven't looked good at the plate. Cespedes has had a couple of moments but is also striking out a lot. Only Michael Conforto and Amed Rosario have looked really good to me so far - but again, it's been two games. The season is short, but it's still going to take some time to see what we really have. The only thing I really worry about right now is a player getting off to a slow start and then pressing because of the condensed schedule. Not much you can do about that, it will be up to Rojas and the coaches to try to combat that.

A friend asked me if I thought that having Hitting Coach Chili Davis working remotely is hindering the offense. Honestly, I don't. The Mets have hands-on coaches here, and I'm always somewhat skeptical on how much even a great hitting coach can do with a major league hitter.

The pitching, other than a pitch in the ninth and Strickland's performance in the tenth, has been very good, pretty much what you could hope for. deGrom was what we all expected him to be, but Matz really did make strides with the curveball. As Ron Darling pointed out during the game, Matz sometimes tips off his off-speed pitches, but then he'll come back with a good one. He needs to keep working on it, but he really looks like he has a chance of being more than the back-end starter he's been the last couple of seasons. Not an ace, of course, but a good mid-rotation guy.

The pitchers are clearly ahead of the hitters now, so we'll need more time to evaluate Matz and the bullpen, but there were some promising signs the last couple of days. Diaz really did throw the ball well both games. He had a live fastball and a really good slider. Diaz runs into trouble at times because he tends to overthrow and his location is inconsistent. The home run yesterday came on a pitch that wasn't that bad. The problem with Diaz is that all of his pitches are hard, either fastballs or that hard slider. He tried to throw one changeup that I can remember, and it didn't look good. If he can't keep batters off balance by changing speeds, he needs to locate better.

I've seen a lot of closers over the years, both on the Mets and on their opponents. I've seen guys with marginal stuff succeed because they were mentally tough, able to execute under pressure and shake off their failures. I've seen guys with real good stuff who failed because their failures get into their heads. Edwin Diaz absolutely looked like that second type of closer last year. It remains to be seen what he'll do this year after already failing once. For sure he will not be the closer long if he can't bounce back.

Seth Lugo would be an option to replace Diaz, but he's so valuable as a really good multi-inning reliever you'd hate to lose that by making him the closer. He demonstrated how important he is to this bullpen already with 2 vital innings in relief of deGrom on Opening Day.

As for the other relievers, the one who impressed me the most was Familia. If you remember back when he was a successful closer for the Mets, his hard sinker had such vicious last minute bite that it looked almost like a reverse wipeout slider. He showed that kind of action yesterday. If he's consistent with it, I think he'll be very good this year. Maybe even my first choice for closer if Diaz poops the bed.

Justin Wilson has impressed me so far. I probably didn't give him enough credit for what he accomplished last year because it came when the Mets were essentially out of it. He really does look like that cutter makes him a deserving late inning option, and Rojas is certainly using him that way so far.

To me, Dillon Betances looked somewhat tentative with his fastball yesterday. He was throwing mid-90s, but he didn't seem to be throwing it with confidence. Now, again, this is based on one game, but he seemed to like his slider way more than his fastball in his appearance yesterday. Maybe it's because it was his first real game after missing almost all of last season. I think it's something that I'll continue to watch, to see if that explosive fastball comes back.

I believe that it's going to be critical for the Mets to find a couple of more guys in the bullpen that can at least keep them in games when the backend guys aren't pitching. I've been quite skeptical of Hunter Strickland. Needless to say, he did nothing to change my mind yesterday. The guy has been bad since 2018, and has shown himself to be kind a hothead, too.

Paul Sewald has teased at time, but has never pitched particularly well. Looking at the other names available yesterday: Chasen Shreve, Drew Smith, Corey Oswalt, and you can see why Rojas rolled the dice with Hunter Strickland. I guess you could hope that Brad Bach could come back and replicate what he did for New York at the end of last year, but that was only over 14.2 innings with the Mets. Jared Hughes, also coming back from COVID, also has a chance to be decent. Oswalt probably figures to be the long man when Stroman comes back, whenever that is.

Provided Diaz isn't a lost cause, the Mets bullpen features 5 really good options at the backend. If one or two of the rest can step up and be decent, they have a chance to make some noise.

The real variable in all of this is the virus. We've seen important players test positive on other clubs. If losing Bach and Hughes for a time is the worst thing that happens to the Mets, we'll probably do very well. Or else we could have an outbreak like the one the Marlins have been experiencing, and it can all go bad quick. There are so many obstacles ahead, and so little margin for error. The season will be 5% complete after tonight, 10% done after Wednesday night's game. Like I said, everything is so compressed.

My posts from the past two days were basically game recaps. It's kind of hard not to write those when it's the first couple of games but, for the most part, I won't be writing recaps very often. It's not my wheelhouse for writing, and there are plenty of recaps available out there for Mets fans from both mainstream sources and other blogs. Plus, I'm often not in a position to write until hours after a game. I like doing this type of writing much more.

I am back working now, and my hours are likely to increase some more. I probably won't be able to post every day, but I've really enjoyed writing again and have no plans to take another hiatus. I'll continue to announce my new posts on Twitter, and you could also subscribe to my blog feed with an RSS reader or subscribe to email updates. My plan is to post 4-5 times a week, more often if I can find the time. I should still be posting daily or almost daily for the next couple of weeks. When I see that changing I'll let you know in this space.

There is a piece in the New York Times today on the concerns of people that work in tv broadcasting that changes enacted this season might become permanent cost-saving moves. In order to reduce the amount of people in the ballparks this season, there is only one feed of every game. When the Mets are on the road, Gary, Keith and Ron will still be broadcasting the game, but the video feed will be that of the home team, and the guys will still be in New York, reacting to the televised feed.

Needless to say, while the purpose of this change is to hold down the risk of spreading COVID, it saves regional sports networks a ton of money by not having to have their own cameramen, sound technicians and other personnel working on the road. They also, of course, don't have to transport all of the gear around.

I hope this doesn't become the norm, not only because I want to see more folks making a living, but because I honestly think that this hurts the broadcasts. If you have MLB TV, you know that the production quality varies pretty widely around MLB, and we're pretty lucky to have some of the best production values for Mets telecasts. I'd hate to lose that just so SNY can be a little more profitable.

That's it for me today. Thanks for stopping by. Hopefully the Mets can bounce back tonight, although it bugs me that I have to watch an ESPN broadcast only 3 games into the season. Then a freaking Thursday night game against the Red Sox on FOX? What a cruel week - losing one like yesterday and then having to watch broadcasts on ESPN and FOX within a 4 day span.