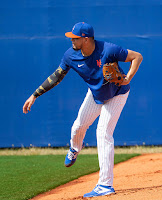 I'm not sure what to say about last night's game. Heading into the season, it really looked like the Mets had done a good job of fortifying their bullpen, to the extent that I believed that the bullpen might be a strength for the club this season. Hey, it still might happen, but it doesn't seem all that likely any more, does it?

With the possible exception of closer Edwin Diaz's mental state, probably the biggest question mark in the bullpen is RH Dellin Betances. While the big right-hander's famous injury from last season was the torn Achilles that resulted from celebrating his return to the mound last September, he spent most of last season out with a shoulder impingement. Apparently he was dealing with multiple shoulder and lat issues last season. He's back in the 90s with his fastball now, and it certainly looks better than it did during original spring training, but the fastball hasn't looked explosive when I've seen him. He obviously doesn't like his fastball, either, primarily relying on his slider when he's pitched.

The Mets needed Betances to step up and be a key contributor to this bullpen. It's possible that he just needs to pitch more to find the lost mph from his fastball, or it's possible that he's going to top out at 93-94 going forward. I'm neither a doctor or a pitching coach, so I'm not going to guess at how this will play out. If he's not going to get the high 90s heat back, he could still be effective with what he's got, but he's probably not going to be the great pitcher he used to be. If that's the case, the Mets will have to find other guys in the bullpen to step up. It's been a pretty mixed bag so far from just about everyone in there.

When the Mets blew that game last night I honestly wondered if their season was already cooked. It feels somewhat apocalyptic to have lost games in the manner that the Mets have done so far, but once I got over my frustration I knew that it's still to early to run up the white flag now. It's reasonable to hope that the starters go deeper into games and take some pressure off this bullpen, and it's also reasonable to hope that things won't continues to go quite this bad for the bullpen.

By the way, as bad as the 'pen was last night, to me the primary culprit for the loss was Porcello. When you are staked to an 8-2 lead heading into the bottom of the fifth and you can't even manage a freaking out in your half of the inning, you don't belong in a major league rotation. He's very fortunate that the Mets are thin on starters right now. Simply terrible.

The news coming out today that more Cardinals have tested positive and another game (at least) has been postponed is making a successful MLB season look as perilous as depending on the Mets bullpen. They're waiting on a second round of tests to determine the next steps.

In other discouraging news, Red Sox pitcher Eduardo Rodriguez will miss the rest of this season with a heart problem that resulted from a COVID-19 infection. Rodriguez's doctor told him that 10-20% of people who have had COVID-19 also have been diagnosed with myocarditis, which is an inflammation of the heart. That's one reason that being exposed to COVID-19 is no small matter, despite efforts of some folks to downplay it.

I'm going to pack it in for today. These looooong games this week have taken a toll on me, I'm trying to decide between watching the Mets or getting drunk tonight, perhaps both would be in order. I'll be back tomorrow.