The Keys to the City 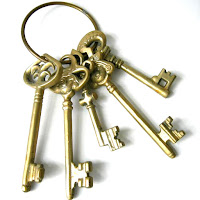 After I had written my last post on the type of organizational changes the Mets could make to ensure sustained success, I took a few moments to think about the one time in my life that really happened. My first year as a Mets fan was 1969. I was 10 years old, and it seemed to me quite likely that my team would go back to the World Series every year. After all, we had Seaver and Koosman, and all the other teams didn't. Although the Mets managed to sneak back into the Series four years later, my youthful optimism definitely took a beating in the 1970s. Despite continuing to have Seaver and Koosman and eventually Jon Matlack, the only time the Mets managed to win their division between 1969 and 1986 was the "Ya Gotta Believe" season of 1973, when the futility of the rest of the NL East allowed the Mets to grab that honor despite a quite mediocre 82-79 record. Other than that bit of luck, the Mets wouldn't finish above third place until 1984, and usually brought up the rear.

It was the period between 1984 and 1990 that constitutes what I consider the Golden Age for the Mets. They finished first twice and second the other five years. They won 100 games twice and accumulated over 90 wins in four of the other five seasons, won a World Series title and made the playoffs one other time in that pre-wildcard era. Don't get me wrong, 5 out of 7 second place finishes was extremely frustrating, but at least there really were meaningful games every September. There have been some ups and downs since that era ended, but the good times never lasted very long and the bad times seemed to drag on and on. Even as baseball lowered the bar for making it to the postseason, the Mets continued to fall short more often than not, just as they did this past season with the bar set to a historically low level.

When the Mets were at their best in the eighties, the Yankees were going through a period of turmoil and mediocrity that basically turned New York into a Mets town for much of that time. Nothing angered Yankees boss George Steinbrenner more that to see the Mets dominate the back page of the tabloids while his own efforts to buy another title constantly blew up in his face. Shea Stadium was definitely the cool place to be during that era, with plenty of the usual type of frontrunners jumping aboard the 7 train.

Looking back, those years seemed to go by in a blur. 1986 was great, but the other six seasons all ended in disappointment. Everyone has their own take on why the good times came to an end. For what it's worth, here's the short version of mine. The Mets hired Frank Cashen to run the club when Doubleday and Wilpon bought the club before the 1980 season. Cashen was the architect of those great Orioles clubs of the seventies. Those clubs were built on great scouting and development supplemented with trades. That's how Cashen did it in New York, too, drafting Dwight Gooden, Daryl Strawberry, Wally Backman and Lenny Dykstra, and making trades for Keith Hernandez, Gary Carter, Ron Darling, Sid Fernandez and Bob Ojeda, among others.

What Cashen did not believe in was signing major league free agents. The eventual undoing of the club came when the farm system stopped producing impact prospects. Wise utilization of the free agent market might have allowed the Mets to strategically supplement their roster to remain really competitive, but Cashen wouldn't go there. Instead there were trades that never really seemed to make sense and failed to help all that much, the bizarre attempt to make Juan Samuel their centerfielder comes to mind. After Cashen left, a succession of GMs were more willing to enter the free agent market, but the choices weren't always wise, and the farm system was more miss than hit until fairly recently. And, of course, from 1986 on the Wilpons had greater control of the franchise, greatly to the team's detriment.

Meanwhile, Steinbrenner earned a "lifetime" ban from baseball in 1990, which allowed wiser heads to control the Yankees. While the Mets floundered, the Yankees built another dynasty, and New York has consistently been a Yankees town ever since.

My antipathy towards the Yankees has always risen and fell based on how many Yankees fans I interact with on a regular basis. My life over the past few years hasn't put me in proximity with many at all. I have one good friend who isn't a big jerk about it. I gave up listening to sports talk radio more than a decade ago when the endless commercials and mindless debate stopped being worthwhile for me. I'm sure that there are Mets fans out there, maybe even you, dear reader, who care more about the question about which baseball team "owns" the city than I do. I respect that, but I could honestly care less.

This really isn't a very hot topic right now, thanks to the Mets lack of any recent success, but it's bound to come up more and more often if the Mets do things right and field an increasingly more competitive team. It became very much of a WFAN talking point in the early 90s as the tables turned. The relative success of the Bobby Valentine era came directly against the Yankees' dynasty years. The brief moment in the sun under Minaya faded quickly with back-to-back September collapses. Under Sandy Alderson there was one trip to the Series and one more quick exit in the wildcard game. During all of those, there were endless discussions of the "missed opportunity" on the Mets part to take back the city.

I can foresee over the next few years a comeback in these discussions over which baseball team owns New York. The answer will change based on which team enjoyed the better year and especially if one wins it all. Whether you're trying to attract clicks online, listeners on the radio or viewers to one of the panel shows on SNY, the question of one or the other team being on top is a great way to generate interest. Hey, I hope the Mets are so successful over the next decade that the answer is undeniably them. But seriously, in the long run I don't care who the pundits pick as long as the Mets do what they need to do to compete.

The idea that there is only room for one successful baseball team in New York is quite silly. The New York metropolitan region is huge. While there are undeniably more Yankees fans than Mets fans in the area, that's mostly a reflection of the Yankees history and the simple fact that they've been far more successful than the Mets over the last three decades. There are plenty of potential fans for the Mets if they are run competently and successfully, even if the Yankees remain successful themselves. Steve Cohen and the folks working for him shouldn't waste a second worrying about what the Yankees are doing. If they make the changes that are required for the Mets to enjoy their own success, it really won't matter what the Yankees do. Bragging rights are nice, but it's the success of your own team that matters in the long run. If the Mets can sustain their own success the fans, ticket sales and television ratings will follow.

There is quite a lot to pay attention to and care about over the next few years. Personally, I was just plain worn out by following this club so closely and for so long with so little payoff. In recent seasons I found myself spending less time and less mental and physical energy following the Mets. A severe shortage of personal time led me to stop blogging about the team a decade ago, but that eased up three or four years ago. I thought about returning then, but I had no real belief that things were truly going to turn around under Wilpon leadership, and that certainly proved to be the case. I didn't want to be the blogger endlessly complaining about their ridiculous lack of positive leadership, nor did I want to be a constant downer sharing my utter lack of hope that things would get better.

The pandemic and a really unfortunate back injury provided me with plenty of time to write again, but what really motivated me back in March when I returned was the knowledge that Fred and Jeff were on their way out. It was the return of hope for the future that motivated my return, and what I hope to share with all of you who decide to spend some of your time reading the words that I've written. I honestly believe that things are going to be getting better fairly quickly, and we're all going to have something real to cheer about in the not-too-distant future. That's what really matters. The rest is just noise.

I'm out for today. Thanks for stopping by. Please stay safe, be well and take care.