They're Going to Hate Us 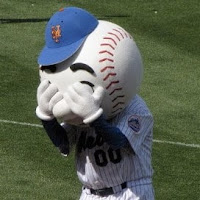 The Mets spent the years from 1977-1983 as one of the worst franchises in all of American sport. Their best record during those seven years wandering in the wastelands was 68-94, and that was 1983 — the last year before they turned the corner. You would have thought that those terrible years preceding the resurgence might have caused folks around baseball to look at those 1984 Mets as plucky overachievers trying to turn around a moribund franchise, but you'd be wrong. I remember being somewhat surprised at the time how quickly in 1984 other fanbases started looking at that team as a bunch of bad guys.
Some of that was earned, of course. Manager Davey Johnson presented a cocky front from the get go, and genuinely seemed to embrace the bad guy role. Although it would intensify in 1985 and the championship season of 1986, the roots of the bad guy Mets were firmly planted in 1984. You had feisty guys on the club like Wally Backman, Daryl Strawberry, Keith Hernandez and a young Kevin Mitchell on that roster. 19-year-old phenom Doc Gooden inspired wonder and envy around the league. The Mets quickly transitioned from laughable losers to the team everyone who didn't root for loved to hate.
In fairness, you could honestly say that Johnson and many of the players gleefully brought much of the drama and noise down on themselves, but every Mets club in those rare subsequent campaigns that featured a really strong Mets team got a lot of venom directed their way, even the 2006 club that had a cast of pretty good guys. They were led by a young star named David Wright who might well be among the most inoffensive great players that ever played the game. (It's rumored that once Wright burped and neglected to say "excuse me", but that's probably apocryphal.) The Mets represent New York, people everywhere else have a bug up their ass about the city that's mostly a reflection of their own inferiority complex, and any time a New York team prospers, that feeling comes roaring back.
So I read with a degree of amusement Ken Davidoff's piece in the New York Post today. Davidoff questioned if the Mets could retain their "charm" if they turn around their fortunes:

The Mets, not always winners (to put it generously), always have been charmers. They are 72-year-old Casey Stengel guiding their very first effort to a historically awful 40-120. They are Banner Day. They are the Home Run Apple. They are, more often than not in their history, the underdog.

Therein lies the challenge for Steve Cohen, definitely not the underdog. Can the Mets' new owner, immediately the wealthiest member of the fraternity he just joined with Friday’s joint developments — the Major League Baseball owners and Mayor Bill de Blasio approving Cohen's purchase of the club from the Wilpons — guide this team to its powerhouse potential without compromising its brand of lovability? In a market in which Yankees fans regard any failure to win a title as an utter disaster, can the Mets both challenge the Yankees and not become them?

Okay, show of hands out there. How many of you are concerned that the Mets might become less lovable to you by winning? Anyone?

There has been a lot of good stuff written and said about the New York Mets over the last couple of days. Even SNY's Andy Martino, who I criticized a couple of days ago as someone who revels in playing the troll, had a really good, nuanced piece on SNY.com yesterday before the final approval came out that I actually really enjoyed. He was also really good on both the breaking news coverage of the approval on tv and on Baseball Night in New York later on. Credit where credit is due.

The contrarian view is going to come out more and more over this team. Questions of "vital importance", such as Will success ruin the Mets fan? will be asked and answered. Frankly, most of the discussion will be pure, unadulterated bullsh*t.

The core of true Mets fans have a strong bond to their team that has endured so much badness. Bad teams, bad management, a shockingly incompetent, meddling owner. A local media that never gets tired of letting you know how much better the Yankees are then your team. Whenever your team screws up, which certainly is often enough, they never stop poking at your feelings about it. The vast majority of the local media is quite comfortable with the current reality where the Yankees and Mets are opposites, the yin and yang of New York sports.

This idea of the Mets being "charmers", i.e. lovable losers, is not something you're going to hear from real Mets fans. That was true about the 1962 Mets. Fans embraced them despite their awfulness because they were so grateful to have National League baseball back in the city. Mets fans that go back that far tell me that this embrace of incompetence and losing was already wearing thin after a couple of seasons. Part of what made the 1969 Miracle Mets so special was they won it all for a fan base that was tired of losing.

Fast forward to 1986. After seven dreadful years and a couple of near misses, the Mets made us winners again. Nobody accused that team of being charming, and none of us who rooted for them gave a rat's rear end about that. And yeah, we wanted more and found 1988 especially heartbreaking. If the Mets turn things around in the way I hope, years that don't end with a title are going to be viewed as huge letdowns. But I'll tell you right now, mourning your team's failure to capture a championship is still better than rooting for a team that seldom even contends.

I hope the Mets get good enough that we Mets fans get accused of becoming like Yankees fans. The one era when that was true, that small window from the mid-80s through the beginning of the '90s was, by far, the best time to be a Mets fan. It wasn't always great, but it was always great to root for a team that mattered. I hope to root for a team that matters again. And if some out there find my team or me less charming when that happens, I have a one-fingered salute for them that is quite familiar to anyone who spends time driving in the New York metro area. My first one is, respectfully, given to Mr. Davidoff for insinuating that our beloved home run apple is anything less than completely classy.

When I was on Twitter yesterday, posting a link to yesterday's celebratory post, I saw a tweet from Matt Cerrone of MetsBlog fame. I doubt if there are too many readers here that are too young to remember MetsBlog from its heyday in the mid 2000s before the advent of Twitter. I have fond memories of refreshing the site repeatedly waiting for the announcement of Carlos Beltran's signing.

Matt imbedded a YouTube video where he talked about the Cohen approval and discussed his future plans that should be of interest to Mets fans who also have fond memories of MetBlog. Check it out and, as the kids say, mash that subscribe button. Good luck, Matt.

Okay, that will do it for me for today. Please stay safe, be well and take care. Thanks for stopping by, come back soon.