The Myth of the Super Tough Boss

One of the first ways Steve Cohen made his mark as the new Mets owner was with Twitter. He's been funny and remarkably candid, even replying bluntly to stories in the locals he believes are off the mark. There was a story by Joe Pantorno on AMNY.com yesterday citing a source that Mets leadership, including Sandy Alderson, would be on a short leash. To those of us old enough to remember George Steinbrenner's heyday with the Yankees, that does not paint an appealing portrait of what you're looking for from an owner. Not that I freaked out about it — I take anything written with anonymous sources with a huge grain of salt. That's not at all to disparage the writer of the piece, who I'm sure did their job in quoting someone with some familiarity on the matter. It's just that the opinion of any third party is just that, an opinion, not fact.
Steve Cohen reacted fairly quickly and bluntly to the author's tweet linking to the story:

Another made up story . Ironically, we were going over PT72 employment metrics this morning and it’s the best of multi manager hf platforms .I’m thankful Sandy is here to guide me.

I had to chuckle when I saw that reply. I wasn't laughing at Pantorno — he's been a great follow all through the period leading up to Cohen's approval. Like I said, you have to treat any anonymously single-sourced story with skepticism, but that doesn't mean that you can't enjoy reading it. Getting a reply from Cohen probably wound up in more eyeballs for the story, which is gold for a writer, even though the tweet was hardly complimentary. I don't know if Cohen is always going to be like this on Twitter, but I hope that he keeps it going .If it helps, I'm even willing to emulate his interesting use of the period in many of his tweets as a show of respect and support.
Stepping back for a minute, though, I think after all of the years of pointless diddling under the Wilpons, some fans might welcome the idea of a boss who hires great baseball people and ruthlessly holds them accountable for the results Two years without a title? Hey, nice knowing you, chum. Next! Everyone in the front office will be too scared for their jobs to even dream of being complacent. They'll also be afraid of making eye contact whenever Cohen walks into the executive offices. No one wants to be the rando arbitrarily sent packing as an example to the rest.
Anyone who has ever worked for a real bastard knows the type likely to have a quick trigger finger for firing underlings: demanding, super critical, quick to assign blame but rarely praises good performance. These bosses take pride in how tough they are to work for, believing it to be a sign of strength and confidence on their part. They don't care that their employees hate them — they actually welcome the negative feelings, wearing them as a badge of honor. Their motto, inevitably, is I'm not here to make friends.
I've worked for some good bosses who could be a bit hard and demanding at times, but they know how to temper that with praise when deserved and real mentoring. The goal of a real boss is to help their employees to succeed and thrive under them. They're not trying to break your spirit and crush you, because that's actually counterproductive to getting the most out of your people. And that's the thing, the super tough bosses, like the one described by Pantorno's source, are invariably bad bosses. They have no real people skills, so they resort to intimidation and fear. They are among the least likely people in the world to develop an organization successful enough to wind up with a personal net worth around $14 billion.
If you look at the most successful baseball organizations, one thing that you'll certainly find in common is that there is continuity in their operations. They're not firing people willy-nilly and starting over again from scratch every couple of years. I'm going to guess that the vision that Steve Cohen and Sandy Alderson share doesn't include that type of organizational behavior, either. There are ways to hold employees accountable without the distraction of heads rolling continuously.
Beyond all that, however, I find myself quite envious of Pantorno for earning the personal smackdown from Steve Cohen, and questioning how I might get one of those for myself. I mean, seriously, what does a guy have to do to be summarily dismissed by the Mets owner? 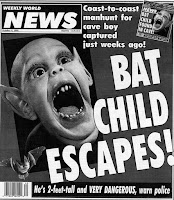 I've run some scenarios through my head. The first that I came up with was a blaring headline "Source: Steve Cohen Dines on Human Flesh!!!" But that one smacks of desperation, the kind of piece that would have appeared in the Weekly World News back in the day, right below the picture of the Bat Boy. Cohen's just going to see right through that lame attempt.
After some more thought, I settled on "Source: Steve Cohen Has Kanye on His Shortlist for Mets Baseball Operations Job!". I really liked that one for a while. It definitely seemed more plausible than the first attempt. But then I realized I would really feel dumb if I wrote that as a satirical post and then it turns out the Mets really do hire Kanye. Or worse, they're in secret negotiations with the guy and it all falls apart because Kanye is mad that somebody leaked. Cohen will probably block me if that happened.
I'm still working on this. If anyone has an idea for a plausible fabricated story, please feel free to leave it in the comments or email me.
Please stay safe, be well and take care.