Now They Really Are the New Mets 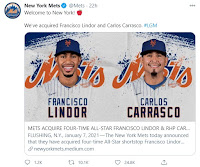 I was in the middle of taking Lisa to some doctors appointments yesterday when my phone started blowing up. The Mets were reportedly close to a deal for Francisco Lindor. It was exciting to see the Mets involved in the type of deal I was used to watching happen with other teams from afar. Still, I was really worried what the Mets might be giving up for a year of Francisco Lindor.
I have to admit when I found out what the Mets gave up for Lindor and pitcher Carlos Carrasco, I was really pleasantly surprised. With the caveat that I am not a prospect expert, I would have expected to see the Mets send over more in return than Andrés Giménez, Amed Rosario, Josh Wolf and Isaiah Greene. If I was listening to someone speculating on  potential Lindor deal and they made this proposal, I would have honestly thought that the Indians would never go for it. While it would be silly to say the Mets gave up nothing for Lindor, they certainly gave up less than what I thought it would take to land him, and the trade was really quite a no-brainer from the Mets point of view. I was already fairly confident in the new front office, and find myself only more so after this deal.

The significance of what the trade cost the Mets should not be lost in all of this. When Sandy Alderson said that the Mets aren't under pressure to sign Lindor to a long-term deal he was being truthful. If the Mets had given up a couple of their absolute best prospects to land Lindor, there would have been a gun to their head during negotiations on a long-term deal.

Now, don't get me wrong, they should absolutely try to sign the shortstop to a long-term deal, and it's going to take a big contract to accomplish that. Still, they would have certainly been in a much weaker negotiating position if they had given up a lot more talent in this deal. All of the pressure would have been on the Mets to justify the trade. Now there is pressure on both sides, as there are other elite shortstops slated to become free agents after this season. There should be mutual interest between the player and the team in coming to terms. It isn't a certainty, of course, but it's quite likely, and much more likely to be a deal where both sides are comfortable with the contract.

I've written a lot this winter about having faith in the new front office of this team, but I've also tried to be honest about my feelings as a fan. As the weeks passed by without anything happening, it didn't diminish my faith in these guys. I never felt the need to go on Steve Cohen's Twitter feed and complain. Still, after all of these years of boring offseasons — or, worse than boring, watching your new GM trading top talent for an over-the-hill cheater — I wanted to see that one big move that would really suck me in. You just knew something big was coming, but it's pretty awesome now that it did happen. I'll still feel impatience, but now it's just impatience for training camp to open and for the season to start.

I sent some time back in the spring writing a series of posts looking back on the 2005 season. Omar Minaya had taken over running the club that previous offseason. While the perception was that the Mets would look to rebuild the farm system, Minaya went the other way, signing Pedro Martinez and Carlos Beltran. Just like that, the Mets fourth place finish, awful trade for Victor Zambrano and Art Howe's final season as skipper were all washed away. The club was seen as an immediate contender for a postseason run.

The thing is, that 2004 Mets club had very little on it beyond David Wright and Jose Reyes. Tom Glavine and Steve Trachsel were still viable starting pitchers, but certainly not horses that a team could ride to the playoffs. Cliff Floyd and Mike Cameron were the only position players beyond Wright and Reyes that offered any real value, and much of Cameron's value lay in his ability as a centerfielder, a position he would no longer be playing. The bullpen was still dependent on using Braden Looper as closer and offered little else of value. There's a reason why the addition of Martinez and Beltran only elevated the club to a third place finish in 2005.

Once again, the Mets are coming off a fourth place finish, but the comparison to 2005 essentially ends there. With the likes of Jacob deGrom, Marcus Stroman, Dom Smith, Michael Conforto, Brandon Nimmo, Jeff McNeil and Pete Alonso, the Mets had a base of young talent that they could only dream of back in 2004. Even the bullpen, bad as it was last season, has some real talent to build around. Now that they've added Lindor, Carrasco, James McCann and Trevor May to the mix, the club looks legitimate in a way the 2005 Mets never did.

There's still work to be done, of course. While it was the M.O. of the Mets back in the Wilpon era to never do more than they absolutely had to do, it's safe to say that this will no longer be the case under the new management. Looking at that projected defense, it's hard to picture the Mets heading into 2021 with Brandon Nimmo as the starting CF. I wouldn't count George Springer as completely out of the team's picture, but it certainly seems fair to say that he'd be an unlikely addition at this point. The roster is still not especially deep and, even if the team could somehow fit Springer's salary into the budget, I'm not sure they would be able to add anyone else if consequence if they did that.

On the other hand, being in a position where they don't have to sign George Springer might make it a bit more possible, particularly if other interested teams aren't going to offer the contract he is looking for. To be clear, I don't see him as a likely candidate to take a 1-year deal with the intention of hitting the market next season. He's already 31, and I don't think his agent foresees next offseason being all that much better than this past one when it comes to teams' willingness to spend. What I could potentially see happening is Springer willing to be somewhat creative with his deal in order to play in New York, especially if offers from other teams aren't that great. I think it more likely than not, at this point, that he winds up elsewhere, but it wouldn't completely shock me if signed with the Mets.

Some other random thoughts:


It was really fun again today writing about the Mets. I believed as much as anyone that the Mets have been going in the right direction since the sale, but there's no substitute for actual results. Adding Francisco Lindor and Carlos Carrasco is a terrific reason for fans to be excited about the upcoming season. I spent all afternoon and evening yesterday watching, reading and listening to everything I could get my hands on about the deal. I'm actually looking forward to the press conference.

With that, I'll check out for today. Please stay safe, be well and take care.