No Free Pass for Luis Rojas This Time Around 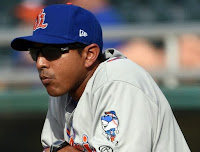 Tim Britton had a good profile of Mets manager Luis Rojas up on The Athletic earlier this week. All in all, Rojas endured a strange year in his first season on the job. It started with Carlos Beltran resigning as manager three weeks before spring training started, thanks to the Astros sign stealing scandal. That spring training came to a screeching halt, but not before it was revealed that his second-best pitcher Noah Syndergaard needed Tommy John surgery. Then, after we all sat around for a few months, waiting to see if there would be a baseball season in 2020, everything ramped up way too quickly for the weird 60-game season that followed. Before that season even began, his now second-best pitcher Marcus Stroman opted out of the season. The abbreviated slate of games was barely underway when his star player, Yoenis Céspedes, also opted out in a manner that was equally poorly handled by the player and the club. To put a cherry on top of it all, Rojas was given a roster, particularly the pitching staff, which proved woefully inadequate, and Brodie Van Wagenen did a poor job of juggling the useful pieces the Mets did possess.

It was not the ideal way to break into being a Big League Manager, but Rojas did a decent job with the hand he was dealt. When Robinson Cano wasn't hitting early in the season, Rojas wasn't afraid to move a (then) future Hall of Famer down in the lineup. Even when the PED's kicked in and Cano's offensive numbers merited moving back into a featured lineup slot, Rojas didn't hesitate to swap in a better defensive second baseman late in games. None of that was "Manager of the Year" level strategery, but it earned respect from me. I worried going into the season that Rojas might be a little too deferential to his stars, but he wasn't. After years of watching Terry Collins — a man with tons of Major League managerial experience — make that mistake time and again, Rojas was a breath of fresh air.

I didn't agree with every move Luis Rojas made during the season, but I thought he handled things well. The ghost of John McGraw wasn't going to be able to lead that group to a title. For the most part, Rojas came across as confident and decisive. I thought he had a decent chance of coming back for another year. There weren't any big-named no-brainers available on the managerial market, and Rojas hadn't done anything to suggest he wasn't up to the job. Still, Sandy Alderson didn't commit to Luis Rojas while he was still attempting to bring in a President of Baseball Operations from outside. Once that didn't happen, Alderson was comfortable with another year of Rojas.

It's become a truism to denigrate managers in today's game as "merely" glorified middle managers. Anyone who uses that as a putdown has never worked a middle management job. If they did, they'd realize that being an effective middle manager is nothing to sneer at. Holding down one of those positions and being successful means performing a juggling act of simultaneously keeping the people who work under you and your superiors happy. Try it sometime before you write it off as easy.

It's true that Major League managers no longer have the power that those of the past enjoyed. The front office is much more heavily involved in the day-to-day decisions that affect the roster, including who's playing and how players' workloads are managed. Instead of running a quasi-independent fiefdom, where a successful manager of the past could tell a GM to mind his own business, today's Major League manager is tasked with implementing others' policies while keeping an active roster of 26 players as happy as possible.

Particularly in a large market like New York, a manager must also function as a highly-skilled press secretary, satisfying the demands of a huge, varied media that cover the team. He must seem friendly and informative while avoiding saying something inartful that will immediately become a huge, negative story.

If a manager hopes to be successful, his players must feel that he has their backs. If a manager loses his clubhouse, it's only a matter of time before he loses his job. On the other hand, if a manager tries too hard to be friends with his players, he will lose their respect. Even if a manager is walking that line very well, he will probably at times be accused of coddling players by pundits who have an old-school mentality.

The Mets will be attempting to integrate more analysis and performance technology this season, as the new owner and front office attempt to drag this club from their former smug Neo-Luddism to the cutting edge. While it will be up to Steve Cohen, Sandy Alderson, and the brain trust to decide what gets implemented, it will be up to Rojas and his coaching staff to ensure this happens successfully.

While the manager carries the burden of the weight on his shoulders of the club's success or failure, the rest of the coaching staff has some significant challenges this season, too. For one thing, if Rojas doesn't cut it this year, he's likely not to be the only one headed for unemployment. One coach who is also under considerable pressure to "prove it" this year is pitching coach Jeremy Hefner.

Hefner enjoyed a huge free pass for 2020. What he was given at the start of the year seemed potentially adequate. However, injuries, opt-outs, and Brodie's awful roster management created a situation where it is almost impossible for those of us outside the club to evaluate the job that Hefner did this past season. He's been given so much more to work with in 2021. He's going to need successes with some of those pieces to prove that he is a Major League caliber pitching coach.

Some examples offhand, in no particular order:

There's a lot more. That's just a sampling. Hefner won't need to or be expected to do much with successful veterans like Jacob deGrom and Carlos Carrasco. He certainly won't be successful with everything in the list above. To prove he belongs as pitching coach on a team that is expected to be a perennial contender, however, he'll need to successfully check off some of the items on that list.
Getting back to Luis Rojas, he'll undoubtedly be managing a stronger roster this season. But there will still be huge challenges. Perhaps by the time the season gets underway, there will be an NL DH, Jackie Bradley Jr. will be patrolling CF, and Kris Bryant will be holding down the hot corner. While those all could happen, I wouldn't bet on any of them right now.
What seems likelier is that J.D. Davis will be tasked with being a more serviceable third baseman, Brandon Nimmo will have to try to improve his defense in centerfield, as will Dominic Smith in left — at least until defensive replacements come into games that the Mets are leading late. Part of Rojas' job will be managing that as effectively as possible. Along with his staff, he'll need to work with players like Davis, Nimmo, and Smith to improve defensively as much as possible. It won't be enough for Rojas and his staff just to throw up their hands and shrug, and I wouldn't expect them to do that.
The same goes with other things we've talked about in this space: baserunning, holding on runners, hitting the cutoff man, throwing to the right base, etc. For too long, we've been forced to watch our team display a painful disregard for fundamentals. It's added considerably to the losing record of most years of this century. As much as we fans nitpick things like batting order, reliever usage, and other fine, nuanced components of a manager's job, the ultimate success or failure of Luis Rojas, Jeremy Hefner, and the rest of the staff will be predicated more on how successful they are in rooting out the slopiness.
That will do it for today. Thanks, as always, for spending some of your time here with us. Please stay safe, be well, and take care.

Andy Martino w/o the TV makeup For now, it's speculation about whether Jacob deGrom really "likes" pitching in New York. Troll...