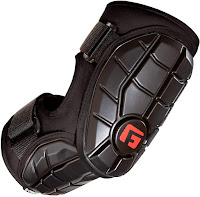 The Mets won a game yesterday in a somewhat ugly fashion. As home plate umpire Ron Kulpa admitted after the game, Michael Conforto should have been called out on strikes when he was hit on the arm by a ball in the strike zone. Those are the hard facts of the matter. When folks start speculating on other things, such as Conforto's intent or whether that play definitively cost Miami the game, that's where they lose me.

Don't get me wrong here. I would have been quite upset if the Mets lost a game in that manner. One of my least favorite parts of modern MLB baseball is hitters being allowed to put on protective armor and crowd the plate. In some extreme cases, I've even seen hitters in their stance with part of their front arm actually encroaching into the strike zone. I can't recall ever seeing an umpire instruct a hitter to back off the plate a little on those occasions. It's something that's been tolerated since that armor has come into use.

Hitters do that in an attempt to take the inside of the strike zone away from pitchers. Barry Bonds was a notable example of this, as was Chase Utley. I remember watching Utley get on base in exactly this manner many times against the Mets, including critical late-game situations. I never saw him denied first base for doing it, not ever, not even once. Utley was awarded first base over 200 times in his career for being hit by a pitch, approximately once every 38.5 PA.

As for whether any batter lets a pitch hit him "on purpose," we can try to read his intent, but we'll never really know. I watched the replay of that AB several times because I was curious, and I never had a definitive answer. When a pitch is close, almost every batter instinctively turns their body inward, as Conforto did. This action actually pushed part of the arm further into the plate. Whether Conforto actually made a split-second decision to let the ball hit him, only he knows. If anyone else is "sure" that he did, I could only envy your mind-reading skills. Anyway, it doesn't matter. It still should have been strike three.

Someday soon, we will have robot umpires calling balls and strikes. Presumably, this play would not have happened if they were in place now. The strike would have been called, and Conforto would have been out. No question of intent would matter.

What wouldn't be fixed by that would be if the pitch was an inch off the plate inside, and Conforto made no effort to get out of the way of it. If you're the home plate umpire, what would you call? I believe most umpires would call it a hit by pitch. It might not be as ugly as when it happens on an actual strike, but it's still ugly. I see no reason to believe that this tactic will go away anytime soon.

There is always a tendency in the press to make a big deal of how a game was "stolen" from a team on a call like this. This particularly seems to be a big deal in the New York press when the Mets catch a break like this rather than the Yankees. The way I see it most clearly is to turn it around and imagine that the ninth inning happened to the Mets. How would I feel afterward?

Well, I'd definitely be pissed. But I think my anger would be at least tempered by the following facts:

If I was a Marlins fan — God forbid — I'd be mad at the umpire, but I'd also be mad at my manager. What is it about Anthony Bass that makes him my team's closer even when he's not doing the job? This is a guy who has saved 15 whole games in his career. Over the years, there have been many times when someone who managed my club insisted on stubbornly sticking with a guy who wasn't getting the job done and hadn't had the career to justify that obstinance. Such is the life of a baseball fan.
As a Mets fan, I don't like how it happened, but I'll take the win. OF COURSE I WILL. The Mets have lost games at least as frustrating, and no one ever offered to give those back. The bottom line is that the Mets are 2-2 now and are starting to get into the swing of the season after MLB dropped the ball by not getting any of those games against Washington played.
I'm still waiting to decide for myself exactly what this Mets team is. I think the offense is capable of much more. The bullpen hasn't looked very good so far, but I don't think I'm ready to demand wholesale changes yet. That start by Taijuan Walker was very encouraging, but, of course, it's only one start. I like our chances this year if both Walker and Marcus Stroman pitch well. Having starting pitching that you can trust beyond Jacob deGrom would be a nice upgrade on last season. It would certainly make Brodie Van Wagenen's foolish mistake with Zack Wheeler two years ago a bit easier to take.
Getting back to the controversial final call, I read Tess Taruskin's piece at FanGraphs, where she suggested that all final plays of every game should be reviewed automatically to avoid having a game end on an egregiously bad call like Conforto's HBP. With all due respect, I don't think I could possibly disagree more strongly with this idea. Could you imagine having to wait at the end of every game for the replay crew had to review the final play? It's bad enough to deal with those overlong reviews that already take place. No freaking thanks on automatic reviews.
What I'd love to see, and doubt very much that I will, would be for hitters who crowd the plate moved off it a bit by umpires. It's almost impossible to rule definitively on someone's intent, but it is certainly possible to keep batters from armoring up and standing right on top of the dish. On the other hand, pitchers have such an advantage these days. Perhaps MLB is hesitant to make their job any easier.
************************************
Speaking of pitchers and their advantages, while I was never a Trevor Bauer fan, and the way those last couple of days of his free agency played out didn't endear him to me any further, I'm not at all comfortable with MLB seemingly singling him out for extra scrutiny in using substances to get more spin on his pitches.
Look, Bauer is a jerk and also an easy target for this investigation. After accusing pitchers on the Astros of cheating in this manner a couple of years ago, Bauer suddenly transformed himself into a Cy Young winner by dramatically increasing the spin on his pitches. Plus, he's a dick. The problem is that this sort of cheating is rampant and widespread in baseball. Making an example out of one guy isn't going to change that.
I don't know how you can suspend someone based on what you find on a baseball, either. Unless a pitcher is physically searched and substances actually found on him, I find it hard to believe that any suspension will stand. And even so, to be fair, you'd literally have to search every pitcher in the game. Catchers, too, for that matter. I think it would be a good thing to crack down on this, but doing it fairly and uniformly presents a tremendous obstacle.
Okay, I'm out for today. Please stay safe, be well, and take care.