I started smoking cigarettes when I was 16 years old. I thought smoking made me look cool. When I turned 21, I decided to quit. I figured that it wouldn't be too hard; I was stronger than a stupid habit. And I was, I guess, but it took me a quarter of a century to finally do it. If those 30 years of smoking taught me one thing, it was not to underestimate the power of bad habits to stick around, long, long after they're no longer welcome.

I had a feeling before the season started that the bad habits of recent Mets teams were going to be tough to shake. What I've seen so far has looked an awful lot like the kind of baseball we've been watching for the last couple of years. Jacob deGrom is 0-1 despite only allowing a single run in both of his starts. When the Mets get runners on base, home plate might as well be a million miles away. The bullpen has been as undependable as they were the last couple of seasons.

If anything, it's been a bit more frustrating to watch over the first five games of 2021. After being forced to wait until every other team in baseball besides the Mets and the plague-ridden Nationals had completed their first series, the Mets seem to have left their bats behind in Port St. Lucie. Jeff McNeil is hitting .077, Michael Conforto .143,  James McCann and Francisco Lindor .176, and Pete Alonso is at .211. At least last season the Mets would get some guys on base with regularity. Nothing makes a team look flatter than when they're not hitting. It's not inspiring to watch, either.

The Mets gave manager Luis Rojas a vote of confidence when they allowed him to continue as manager in 2021. In fairness, there weren't any slam-dunk replacements available out there, either. While it's silly to assign the manager all of the blame for a team not performing, Rojas has looked a bit in over his head in the early going.

Marcus Stroman was angry today that he started a game that looked like it had little chance of being played. Stroman was right. Marlins manager Don Mattingly, never a great tactical manager IMHO, outmanaged Rojas today by forgoing his scheduled starter for an opener — who never made it in the game, anyway, as the game died a soggy death in the top of the first. Mattingly's call was the correct one. If Rojas had elected to do the same, he could start Stroman tomorrow against the Phillies or even brought Stroman into that game later if the skies had miraculously cleared.

Between the Nats' covid outbreak, today's weather, Rojas' rookie mistakes, and some seriously limp bats, this has been quite a disappointing start to a season that we all looked forward to quite a bit. I was hoping the Mets might come out strong in 2021 and send a message to their fans and the rest of the league that they weren't the same old Mets. It's still mighty early, but the first impression hasn't been a strong one. 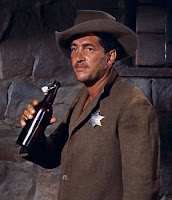 One of my favorite old westerns is Howard Hawks' Rio Bravo. It starred John Wayne as Sheriff John T. Chance and Dean Martin as Dude, his deputy. Like our Mets of recent years, Dude had fallen into hard times, becoming a hopeless drunk after some woman broke his heart. Wayne's character was looking for a big comeback from Dude to take on evil rich guy Nathan Burdette and his gang of hired gunslingers.

Like the 2021 Mets, Dude's comeback got off to a real slow start. He might have been a fast gun back in the day, but he was really shaky, and it looked like Dude wasn't going to be able to turn it around. Eventually, he did, though — you just knew he would. The ending was so satisfying Hawks made essentially the same movie 7 years later, with Wayne starring again. I wish I could be that sure about the 2021 Mets but, unlike traditional westerns, real life doesn't always hand us the ending we're looking for. Here's hoping, though.

Sorry I've been a bit sporadic this week in posting. Like the Mets' previous bad habits and the COVID-19 pandemic itself, Lisa's health problems have lingered on into 2021. She's back in the hospital again, and it's been a bit of a struggle for her. I'm rooting for her and the Mets to both turn things around soon. Ya gotta believe.