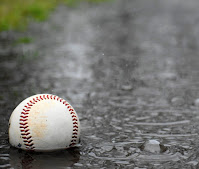 With the prospect of the New York Mets' entire 3-game series against the Atlanta Braves being rained out, I am reminded again that the original plan for Citi Field included a retractable domed roof, which the Wilpons ultimately decided against as a cost-saving move. While it's easy for me to cheerfully spend Steve Cohen's money for him, I hope at least he would look into the prospect of adding a roof to the stadium. It would seem logical that at least some of the money could be offset by the opportunity to host year-round events at the facility.

Realistically, the chances of this happening are pretty small. The man just spent over $2 billion to buy the team and is investing in the organization's infrastructure. There will be plenty of things in the queue for spending that will line up before fixing yet another Wilpon mistake. It would have reportedly added $200 million to the original cost of the stadium to have a retractable roof. Considering this was pre-Madoff and they were financing their share of the stadium cost anyway, this was just another example of the Wilpons choosing to save money in the short-term while costing the team in the long term.

You could make the argument that the Mets would benefit from playing as few of these games as possible this weekend, given the ridiculously bad lineup manager Luis Rojas has to pencil in every day. Given the number of games they already have to make up, this has to be looked at having somewhat diminishing returns.

And however this weekend plays out, the Mets are heading into June, a month that has somewhat of a tradition of exposing previous Mets teams. It's an almost unimaginable number of injuries rather than a lack of forethought that's leaving the Mets in a precarious position heading into the month. Still, precarious it is, with 7 games against the San Diego Padres, including 4 in their park, 4 against the Chicago Cubs at home, and more games against the Braves, Phillies, and Nationals.

Even the easiest games on the schedule don't look that easy. The Mets are opening their road trip with a 3-game set in Arizona, where an opposing club usually needs to score some runs to prevail. Same with the pair of contests in Baltimore at the end of the trip.

Given everything that's coming up in June, if the Mets are still even close to the top of the Division by the time July rolls around, I'll take them seriously as a contender. Until then, I'm just not as optimistic as I'd like to be.

Here's to all the players who have made contributions this past month against some really tough odds. The Mets could very easily be in a big hole by this point, given the length of their injury list and the lineups overflowing with Triple-A caliber ballplayers. That they have avoided that so far is a testament to excellent pitching and some unlikely contributions.

Still, if they wish to carry this feel-good story past the month of June, they really need their healthy guys to start making stronger contributions and some of the wounded players to make it back. I've witnessed more than my share of Mets June Swoons. I'd love to see something better this time around.