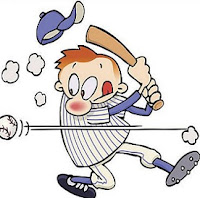 One of the biggest stories in Major League Baseball this season is the dominance of pitchers over hitters. Through yesterday's games, MLB hitters have combined to slash .236/.312/.395. This is the kind of offense you might expect from a slick-fielding utility man. The average runs per game for all teams is 4.37. Teams have struck out an average of 8.95 times per game. The numbers are worse for the New York Mets. Mets hitters have slashed .233/.312/.364 over 51 games, though they are striking out a teensy bit less often than the MLB average, about 8.6 times per game.

Now we'll take a long jump in the Wayback Machine back to 1971. Pitchers dominated the game in those days. The average number of runs per team was 3.89. Despite that, the average line of .249/.317/.365 was better than present-day batters are slashing. And teams struck out an average of only 5.4 times per game.

MLB Commissioner Rob Manfred saw a problem with the way the game was trending. Baseball had become a game of strikeouts, walks, and home runs. People have been complaining about how boring these games had become for years. Worst of all, the playoffs — baseball's biggest money-maker — had become hard to watch as minutes dragged by without balls being put in play.

The answer Rob and his crew came up with was to make changes to the baseball that would suppress home runs. Sheer genius, I know. And sure, that slightly increased the number of balls in play. Some balls that were home runs in 2020 are flyouts this year. However, more flyouts and fewer home runs didn't make the game less boring. As anyone other than Rob and his crack crew of advisors would have guessed, it made the game more boring. As a bonus, a side effect of the lighter core of the new baseball was making the ball spin more, which leads to more strikeouts.

To be fair, I'm sure some of these suppressed home runs wind up as doubles. I guess some would argue that a double is more exciting than a home run. I wouldn't, personally, but I'm sure there are fans of two-baggers out there who are happy. Me, I love home runs. My problem is with all of the strikeouts and the suppressed offense in general.

Six pitchers have already tossed no-hitters in 2021, and that's not even counting a 7-inning gem tossed by Madison Bumgarner in the second game of a doubleheader against the Atlanta Braves on April 25. This was after Zac Gallen allowed the Braves a single hit in the first game. Now that's suppressed offense.

It's obvious to any baseball fan that most Major League hitters swing for the fences in today's game. A reason often given is that the dominance of pitchers has made it harder to string hits together, so the home run is the best weapon to put runs on the board. While this has some merit, most hitters utilize a slight uppercut in their swing and swing for the fences, even with two strikes. This has contributed to the cartoonishly high strikeout totals.

The majority of pitchers combat the launch-angle approach with fastballs up in the zone, a weakness for these uppercutting hitters. Because there is such a large percentage of these hitters in the game this year, pitchers can combat most of any team's lineup with the same exact same approach. To that extent, at least, hitters are making it easier for pitchers. Pitchers who can throw a rising 4-seam fastball up and combine it with a down-breaking slider have a reasonable chance of striking out most MLB hitters, as long as they can execute.

The biggest reason baseball has evolved this way is the value analytics place on getting on base and hitting for power. And no, this isn't an attack on the usefulness of analytics. A batter who hits for power and gets on base is more valuable than a singles hitter who rarely walks. That's the point of the OBP stat.

For instance, 2B Felix Millan was an important player on the Mets from 1973-1977. He was a personal favorite of young me. Millan was one of the few notoriously light-hitting Mets who could put up a decent batting average. He would draw a few walks, but he wasn't particularly patient and didn't hit with much power.

His first year with the Mets was 1973, the famous "Ya gotta believe" season. Millan hit a very respectable .290 that year, but his OPS was only .685, and his OPS+ was below league-average at 92. The only time Millan had an OPS+ over 100 was 1976, his second-to-last season with the Mets. His batting average and slugging percentage were a bit lower than 1973, but he drew more walks. His OBP of .341 was the highest in his career.

When I was a kid, the batting average stat was still all-important. I would scoff at the idea that John Milner, who batted only .239 on the season, was a vastly more valuable offensive contributor than Millan and his .290 average. Milner drew a good number of walks and hit for power, and his OPS of .762 was 77 points higher than Millan's. If I gave "The Hammer" the nod over Millan at all, it was Milner's 23 HR and 73 RBIs — compared to Millan's 3 HR and 37RBIs — that I would have thought made the difference. Counting stats were really all that I cared about beyond batting average.

Of course, Milner's power advantage came at a price. Milner struck out 84 times in 519 PA, Millan — who choked up on the bat in a way you don't even see anymore — only struck out 22 times in 699 PA. Yet, with what we know today, Milner was still a vastly better offensive contributor than Millan. You don't see many, if any, like Millan today. But there are plenty of power hitters who accumulate tons of strikeouts.

The point to all of this is that the power hitter is still king in baseball. He probably will be for the rest of my lifetime. And, as much as it would cut down on strikeout numbers, we don't want a roster full of Felix Millans on our ballclub. Those soft groundouts really aren't all that much more exciting than a strikeout. We're not going to see a hitter sacrifice bunt successfully 18 times, as Millan did in 1973. Ralph Kiner's old line about power hitters driving Cadillacs while single hitters drive Fords still has meaning today.

Of course, MLB's crackdown on pitchers using illegal substances to impart more spin to the baseball will dramatically impact games. It's impossible to say just how much of an impact until we can see it in action. But I think it's going to drop strikeout numbers. There's too much evidence out there that pitchers are increasing their spin rate artificially. The infamous YouTube video of Yu Darvish is only the latest example of suspect behavior.

I'm sure there are offenders on every team, including the Mets. I'll bet that some of these pitchers will still do alright, while some who rely the most on sticky stuff may find their stuff no longer competitive. Again, we need to give this a chance to play out. However, there's no longer a doubt that there will be a crackdown. Owners feel like the boring offense is hurting them in their pocketbooks, and they are the driving force behind this effort.

Unlike many things that Manfred and the owners do, I think this will help the game by cutting down on strikeouts. However, I do think that MLB needs to be wary of unintended consequences.

Some of the substances that pitchers use help them better grip the baseball but don't lead to exaggerated spin rates. In this category, the combination of sunscreen and rosin appears to be rather benign. As important as eliminating the ridiculous sticky substances is, MLB should consider some expansion of what is allowable. Pitchers having trouble just gripping the ball could lead to more batters getting drilled in the head, which certainly won't help offense.

Another concern I would have would be some pitchers getting hurt trying to recover some of the spin they've lost without superglue on their fingertips. This is probably an area where individual clubs have to work out. I'm sure every club, including the Mets, knows who's cheating on their roster. They're going to have to work with their pitchers to help them find a way forward. The whole sticky substance thing has been going on for so long, there are probably pitchers who have used them for most, if not all, of their careers.

There will probably be fewer strikeouts with this crackdown, but there still will be way too many. As previously noted, a player who draws walks and hits for power will still be the most valuable type of hitter. I think we have gone too far in having lineups that feature almost exclusively this type of hitter.

If clubs see value in batters who make contact and hit the ball all over the field, that will help things much more than just penalizing sticky-fingered hurlers. Maybe we return to a type of ball where clubs strive for a diverse lineup of both power hitters and contact hitters, the way lineups were once constructed not all that many years ago. For that to happen, clubs will need to draft, develop, and promote some contact hitters — and they'll need to reward the best of them by paying them. Seeing this type of hitter succeed in MLB will encourage kids to stop selling out for power at the expense of becoming a better hitter.

Getting back to Felix Millan, I doubt very much that his exact type of hitter will make a comeback. Primarily trying to slap singles won't cut it, but a hitter with gap power who gets his share of doubles and hits a few balls out could prove valuable. No one will be asked to bunt as often as Millan was, but bunting is really a dying skill. When one is required, today's hitters often fail. Having the ability to lay down a good bunt when needed should be required of a hitter that isn't a middle-of-the-order bat.

Thanks to all the whiffing, one play that isn't used very much today is the hit-and-run. I remember Felix Millan being a master of that play. If we had some hitters who excelled at making contact, managers would use it with a bit more frequency. It's an exciting play to watch. Even younger fans who didn't grow up with it would enjoy it. While frequent bunting is unlikely to ever come back, I could see a future with more hit-and-run plays. You just need more of the type of hitter that can execute it.

But still, even in this imagined future, the home run hitter will still rule baseball, just as the power pitcher who rings up plenty of strikeouts will be the most revered type of hurler. They'll draw more fans and help the team make more money. Because of that, they'll get paid the most. It's simple economics.

You'll never see a return to the type of baseball that typified my youth, and that's fine. Baseball has evolved greatly over its existence and will continue to do so. We just need some common-sense changes to help the game be the best it can be right now. Getting the extreme sticky substances off of pitchers' fingertips won't solve everything, but it would be an excellent start.