Missed It by THAT Much 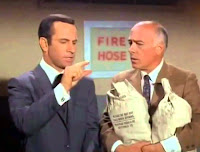 As promised in my last post, I have no intention of spending what little writing time I have these days complaining about the current edition of the New York Mets. While it's gratifying that they actually played a really solid, complete game against LA in their final meeting this season and — gasp — actually won a game against them yesterday, it doesn't change things that much. Their play since the All-Star break speaks for itself. I never expected them to be in quite the same class as the Dodgers this season, but it really strikes me how many of the contests against LA and San Francisco have been close games that the Mets time and again failed to find a way to win. They might as well have gotten their asses kicked every game for as much difference as it makes in the standings.

Because most of these contests have been competitive — at least as indicated by the final score — one way that you could look at these games against the Dodgers and Giants is that a break here and there could have created a whole different dynamic for our guys — in the series against those opponents and the season itself. If a few of those games turned into wins, the Mets could be a whole lot closer to the division lead right now. While there is obviously truth in that, it's more of an indictment of how this club comes up short in the ways a team has to if it hopes to be among the elite in baseball.

Whether it's continued baserunning deficiencies or the failure to make a big play when needed on offense or defense, the continued theme for the 2021 Mets is that they're not quite ready for prime time. Before the struggles against the class of the National League, there were consistent failures against bad and mediocre teams. There have been occasions this season where the Mets looked close to taking that final step into being a legit contender, but every time they seemed to fall short and then fall back. For those old enough to remember the tv show Get Smart, Don Adams' catchphrase "missed it by that much" seems a good way to sum up this season for the Mets.

They might still have a hot streak left in them. It wouldn't shock me at all if they made a push back into contending for the Division, although 7 games is a big hill to climb this late in August. I could see this team teasing all of us one more time before giving up the ghost. However, even that might prove to be a tall order, with Jacob deGrom looking less and less likely to return this season.

Injuries like deGrom's have certainly played a big part in the Mets disappointing (at least so far) season, but they're hardly the whole story. So many of the guys just didn't play well when they were in the lineup. I do believe the Mets have missed the leadership of Francisco Lindor and should get a boost when he returns this week as they did yesterday when Javier Báez came back. Hope is not dead, just severely wounded. Despite everything, I'm not in a hurry to give up yet.

The local media seems in a more pessimistic place than I am. Press coverage of the Mets has grown increasingly apocalyptic as the losses mount, and comparisons to the Wilpon years are cropping up quite regularly. I get it, but as disappointing as things have gone in 2021, this was never supposed to be a 1-year window for the Mets to make the playoffs. Whether they can turn this season around or not, the expectation is that the Mets will again be trying to compete for a playoff birth in 2022 and beyond. Moreover, Steve Cohen, Sandy Alderson, Zack Scott, and the rest won't be rushing to play catchup as they had to this past offseason, thanks to the lateness of the sale.

There is still the question of whether Cohen and Alderson might still try to hire a president of baseball ops to oversee things as they had planned to last year. Of course, that would involve convincing someone with an impressive record and a big name to take the job. We all know those attempts failed last year. I'm not sure anything has changed this year to make the outcome different. The teams that wouldn't let their executives talk to the Mets last winter are unlikely to change their minds this year. Guys who didn't want to uproot their families then probably still feel the same.

Last winter, there were worries that some potential candidates were scared off by Steve Cohen's goal of trying to win a championship in 5 years. Many of these targets are in situations where there is low pressure to win as long as they can field consistently competitive clubs. Job security is a consideration for most of us, if we're honest. The most likely scenario for next season probably still consists of Alderson and Scott continuing to run baseball ops.

I don't see that as a disaster, but I believe that the Mets would greatly benefit from someone younger than Alderson and more experienced than Scott as the final say in baseball operations. Maybe Steve Cohen would be willing to approach Theo Epstein with a bucket load of cash and even some equity in the team. Combine that with an appeal to Epstein's ego to turn around a third struggling franchise, and I guess there's a small chance it could work. Beyond that, though, it's hard to believe that the familiar names the Mets struck out with last winter will change their minds this winter.

Putting aside the question of who will have the final say in baseball decisions next year, there is much work ahead of the team's front office to effect the necessary changes to avoid missing it by "that much" in future seasons.

Tim Britton had a piece in The Athletic yesterday wondering how Cohen might respond to this season, which currently seems likely to be a pretty big disappointment. In a tweet Wednesday morning, Cohen expressed understandable frustration with the poor season-long offensive effort that is the primary culprit for their post-All-Star break struggles. It didn't seem like an over-the-top reaction to me, but a New York owner expressing even a bit of frustration with his team will inevitably draw comparisons to George Steinbrenner.

I guess there is an argument that even a relatively tame public reaction from Cohen will further scare off potential hirees. Personally, I feel that anyone scared off by that shouldn't have the job anyway. The real worry for me is that it contributes to the story of Mets dysfunction, which can truly hurt the effort to get good people working for the organization and signing attractive free agents. If the Mets can't at least make a strong September playoff push, that's not going to help change the narrative, either.

In any case, luring Theo Epstein here is a long shot, as is changing the mind of any candidates the club liked currently working in the game. It seems likely that hiring a desirable president of baseball ops will not happen this winter, either. If the Mets can't make that hire, I'd still like to see them fill out the top level of their organization around Zack Scott with more talent and decrease Alderson's day-to-day role in baseball decisions. There are so many crucial decisions to make this winter. Just the list of players who will attain free agency is daunting:

You can make arguments for and against any of these guys, but those the Mets choose not to keep will need to be replaced. None of the Mets' best prospects will be ready to start the season in New York. Neither of the two top pitching prospects, Matt Allan and J.T. Ginn, seem likely to pitch in the majors at all next season.

And, if the Mets want to make a big trade this winter, there are still so few prospects that other clubs will consider. Do they really want to thin out their top prospect base even further? The Mets have actually done a really good job in scouting and development in recent years, but they can't keep trading away so many top picks and ever build a farm system that will let them compete against teams like the Dodgers and Giants.

Whatever decisions are made about which players will be a part of the 2022 Mets, another big question that looms is who will coach them? Luis Rojas seems unlikely to retain the manager's job barring a huge team bounce-back in September. Of course, if Rojas goes, there are no slam-dunk candidates in MLB to replace him. I doubt that he'd be replaced by anyone in the organization currently. If he does go, the coaching staff seems likely to follow, at least most of them. Maybe a new manager might be persuaded to keep pitching coach Jeremy Hefner, who really seems to be doing an excellent job with what he has to work with. Or maybe a new manager wants to bring in his own guy.

I'll be writing in future posts about things I'll be looking for this coming winter. I would expect to see quite a bit of change, not just because this season has been disappointing. I think the Steve Cohen Mets is very much a work in progress. I honestly believe that better days are coming, whether our current club can get back into a real playoff race or not.

I don't place blind faith in Steve Cohen. At 62, I have no need to create heroes for myself. Like all of us, he is imperfect and makes mistakes. Still, he's a really smart guy. Ultimately, I believe the organization will continue to get smarter. Given some time, competing against teams like the Dodgers and Giants will look a lot better than it has this season.

So yeah, it sucks that the Mets came apart so much in July and August. They need to do better as a team and an organization. I have faith that they will.