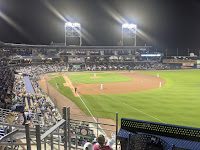 I haven't written here for a while. It's just as well. There really isn't much to say about the 2021 New York Mets any longer. They've been at the edge of "stick a fork in us" for quite some time. The just-completed dreary series against the St. Louis Cardinals did a good job of putting an end to even semi-realistic playoff hopes for the Amazins this season. The first year of the Steve Cohen regime went a little too much like most of the recent Wilpon seasons have gone. It only compounds the frustration that this season provided such an eminently doable route to the playoffs, and all the Mets could manage was another slapstick faceplant on another too-familiar journey to Palookaville.

My personal journey has been rough this year but, unlike the Mets, I've had some positive news recently. Lisa has mostly recovered from a bout of COVID that she contracted in the hospital. Somehow, thanks to vaccines and some precautions we took when she returned home still positive for the virus, I have managed to stay COVID negative.

In another promising development, the setback I suffered rehabbing from back and neck surgery is being treated non-surgically with a course of steroids. Fingers crossed that I can avoid my fourth spinal surgery in just over a year. I just hope that, at age 62, I can also avoid back acne from the 'roids.

The recent good news has come too late to salvage my plans to visit the Mets' minor league affiliates in Syracuse and Binghampton this season. I injured my back before their seasons even began. My surgery was in late June. Next year I still have hopes of making it out to watch some Mets minor league games, God willing.
I finally made it out to one minor league game in September with my old friend Taras. We went to see the Hartford Yardgoats, a Colorado Rockies AA affiliate, play against the Reading "Fightin Phils" — two of the dumbest named teams in all of minor league baseball. That's my pic of the stadium above.
Hartford is the only affiliated team left in my state of Connecticut. While it was nice to make it to one damned live baseball game this season, the 1-0 game was a little too much like all of the offense-challenged Mets games I watched on tv in 2021. But I did enjoy it. I would have gone to one more game there if it wasn't for my family's personal COVID exposure.
I still entertain thoughts of seeing a Mets game in person before they pack it in for the season, but I know Lisa can't come with me, and I'm not sure if I want to go to a game by myself to watch these Mets play. TBD. Depends on how my back feels, I guess. I suspect obtaining a ticket won't be a problem.
I just wanted to check in here, as I've been away from blogging for over a week. I have a post I've been working on that should be live tomorrow or the next day, more focused on the Mets and recent events. Until then, please be well and take care.