This Kid May Have Something 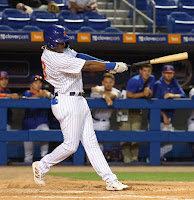 Although he didn't receive much fanfare before this season, Mets prospect Junior Tilien is making himself someone to watch going forward.

I don't normally write about prospects at this site. It's not that I don't care. I actually spend as much time as I can following the exploits of New York Mets prospects. I'm checking daily to keep up with the latest exploits of Mets farmhands like Francisco Álvarez, Brett Baty, Mark Vientos, and Ronny Mauricio. I look forward to the day when top pitching prospect Matt Allan returns after undergoing Tommy John surgery in May 2021.

I even keep an eye on bullpen prospects such as Michel Otañez and Bryce Montes de Oca, whom I mentioned earlier this month. Both are hard throwers who enjoyed some success in AA Binghamton, earned promotions to AAA Syracuse, and have struggled a bit at their new level. If they can solve Triple-A hitters, their next step would be showing up in the Mets bullpen, trying to get major league hitters out.

Highly-ranked kids like Álvarez receive most of the attention, and rightfully so. They have the potential to be stars. Baseball clubs are built around their best players. But it's still a huge win when a club can take less-heralded players and make contributing major leaguers out of them. It will be a huge developmental win for the Mets organization if Otañez, Montes de Oca, or another hard-throwing kid could follow the lead of Colin Holderman and Stephen Nogosek and can contribute to the big league team.

I don't write about prospects more often because I lack the skills to evaluate kids. I depend on the knowledge of others to keep up with the doings down on the farm. I eagerly read about Álvarez raking, then falling into a slump, and then working his way out — a vital part of the development process. Enjoying success and overcoming adversity prepares kids for just how hard it is to succeed in the majors.

From the knowledge imparted by others, I pay attention to certain details. Is Mauricio learning to be patient at the plate? Hmm, not really. He's only walked 11 times in 223 PA.

Is Baty hitting the ball in the air more? One limiting factor for him in his young career is that Baty hits the ball on the ground too often. From the information at FanGraphs, Baty has hit more balls in the air this season, which is good, but his strikeout rate has gone up also, which is not good.

There is a lot of information available these days for those of us who wish to peek behind the scenes a bit more. Right now, it seems to me that Baty and Mauricio have a lot of work to conquer Double-A, much less make it all the way to the majors. Meanwhile, Álvarez may be forcing the Mets to at least consider a September promotion to Queens. I honestly love this stuff.

I spend a lot of time reading prospect rankings and what experts have to say. On kids like Álvarez, Baty, Vientos, and Mauricio, there is a ton of info out there. Every once in a while, however, I find myself getting interested in a kid who hasn't received a ton of virtual ink yet. Recently, a kid named Junior Tilien has captured my attention.

Junior Leoncio Tilien is a 19-year-old infielder who the Mets signed out of the Dominican Republic in July 2019 for $185,000. Not chump change by any means, but not a huge payout, either. These were still the Wilpon years, although the Mets did spend over $2 million for Alex Ramirez, who has been tearing things up for Low-A St. Lucie. Ramirez is climbing up prospect lists this season, but that was hardly unexpected. But Junior Tilien has seemingly come from nowhere to have an impressive start with the club since his debut in early May.

Tilien first surface stateside in 2021 with the complex league Mets. His stats were not at all impressive. Junior slashed .165/.223/.233 over 112 PA in 32 games with 7 doubles as his only extra-base hits. He received only passing mention in some prospect rankings. Prospects1500.com had Tilien at #47 in January 2021 before his debut in the states, in a tier of prospects "worth keeping an eye on, but likely to never make a team's 40-man roster." Of Tilien himself, they noted:

Offensive minded shortstop with a long, pull biased swing. Raw defensively but is athletic enough and has the arm strength for the position.

Tilien is playing more 2B than SS for St. Lucie this season, but his offensive numbers have taken a huge jump in his first 24 games. He's slashing .297/.354/.593 with 6 2B, 7 HR, and 24 RBI in 99 PA. Junior had a 3 HR game in his 14th game of the year. Encouragingly, he's struck out only 19 times while walking 8 times. Tilien's impressive power display hasn't come at the expense of plate discipline.

Tom Brennan from Mack's Mets, who, unlike me, writes knowledgeably about prospects, also wrote quite favorably about Junior Tilien in his post last week. Tom is impressed with Junior's low strikeout numbers:

But what catches my eye with him, aside from his HRs and RBIs this year, is his low K rate, both this year and last.  Just 38 Ks in 50 pro games - quite unusual these days.

Low-A ball is a long way from the major leagues, and Junior Tilien is only 6 weeks into his season at St. Lucie. But even though he wasn't a huge signing and hasn't been heralded by national prospect gurus, his success this year makes him a player to watch going forward. Can he keep putting up good power numbers without succumbing to high k rates as he climbs the ladder? Maybe yes, or perhaps he's just a minor league flash in the pan. We'll find out.

While it's fun to follow the exploits of high-ranking prospects such as Francisco Álvarez, it's also enjoyable to take a kid like Junior Tilien and make him your guy. While I take absolutely no credit for "discovering" him, I plan to keep an eye on Junior Tilien's progress this season and going forward. Can he be one of those international players who has a successful major league career despite not being one of the big names in his signing class? That would be a huge win for the Mets as they strive to make their farm system more productive.