Beyond the Power of Reason 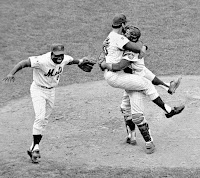 Being a Mets fan often required a good deal of faith, but believing in the franchise is a hell of a lot easier these days.
Things have been progressing slower for Mets fans after the frenetic week of baseball's winter meetings. There have been some press conferences and a surprise near-miss on another huge free agent. The Mets also signed a catcher, ratcheting up the speculation that James McCann won't be back next year. There is still a definite need to procure a productive fourth outfielder. They re-signed Adam Ottavino, but the Mets may also seek to add one more experienced late-inning reliever to the bullpen mix. Beyond that, as the pursuit of Carlos Correa proved, it's unwise to make any assumptions about what the Mets still might do to make a successful offseason even better.
I never doubted that Steve Cohen would be willing to spend enough money to ensure the 2023 Mets were a legitimate playoff contender, but I expected them to take a baby step backward from last season's success. I didn't believe it was realistic to win over 100 games again and challenge for the Division title when so much of their pitching staff achieved free agency. To be clear, it will still be a difficult task to approach that level of success again. The Braves and Phillies have improved their clubs. With all of their excellent young pitching, even the Marlins should be able to find a way to improve on last season's 69-win campaign. But Steve Cohen's willingness to take his payroll beyond any reasonable expectations entering the winter ensured that the Mets would have a real chance to contend for an NL East title again next season.
We Mets fans are now two years removed from the "good enough" Wilpons bumbling ownership. Steve Cohen's relentless drive for greatness stands in almost surreal contrast to those years of stumbling around in the wilderness. A thought occurred to me after the Mets reached an agreement with Koudai Senga to cap off their remarkable week at the winter meetings — in my wildest dreams of what might happen with the Mets if the Wilpons were finally forced to sell, I never pictured anything quite like this. I really just hoped for someone with competence and a few bucks to spend.
There is a famous quote from Voltaire: "Faith consists in believing when it is beyond the power of reason to believe." When I've run across this quote, it is usually referencing religious faith. However, Voltaire was notoriously not a big fan of the Catholic Church or organized religion in general. I've thought about this quote often over the years in trying to make sense of how I could remain a fan of the Mets for decades, long after it had become painfully evident that they were one of the most poorly run franchises in American sports. Perrenial, laughable losers, despite the enviable advantage of playing in the largest market in the country.
Since the one actual dynastic period in Mets history faded as the 80s transitioned into the 90s, it's become harder and harder to look at the Mets and see the hope for anything beyond brief flashes of success. I recently stumbled across a piece by Joel Sherman from 2004. It begins with the following quote from Jeff Wilpon:

"I AM not an idiot, I am not abrasive, I am not running the day-to-day workings of the baseball operations, I 'feel the pain' of Mets fans because I am passionate about winning and – most important – I am not going anywhere."

It was a rare sports ownership moment, indeed, where the owner's son felt the need to go on the record and deny being an idiot to the fanbase. But the Wilpons, Jeff in particular, were infamous meddlers, as Sherman's piece went on to document. A few snippets:

Outside the organization the Mets are viewed as having a chain of command where the lines of authority are blurred, which creates problems [from] the top down.
... Former Met employees say Fred Wilpon is a yeller, but Jeff Wilpon actually could get physically imposing when he loses his temper. The result, these executives said, is a feeling that if you do not agree with the Wilpons, your job is in jeopardy and this breeds "yes" men. For example, one former executive says, ex-hitting coach Denny Walling did not agree that minor-league hitting coaches should also serve as the first-base coach and challenged Jeff’s counter view at a large, preseason meeting, and "he was essentially fired that day."
... outside executives say the Mets too often just pretend like they want to spend more, like in the case of Vladimir Guerrero last year, and that the budget changes as the offseason goes along.
...A former Met official also said the Wilpons are hypersensitive to media criticism, and craft decisions to avoid the bashing. Jeff denied this, but there are no doubts the Mets seek counsel about important issues, even the hiring of managers, from media favorites.

In Sherman's piece, Jeff Wilpon talked about "sustained winning." He tells Sherman, "What I have told the baseball and business departments is that in 10 years I want other teams and other people to say 'I wish we could do it like the Mets.' " Steve Cohen was basically saying the same thing when he took over, but, unlike the Wilpons, Cohen looks likely to succeed in those endeavors. Being a lot richer certainly helps. More importantly, however, Steve Cohen has found a way to be involved with his baseball people in a way that empowers rather than hinders them. Cohen is also willing to invest in new technology, which the Wilpons resisted. Steve Cohen doesn't need to proclaim out loud that he is not an idiot. The direction he is taking his franchise is all the statement he needs to manifest his intelligence and hunger to be the best.

Another significant difference between ownership past and present is that Cohen is driven to invest money and energy into all of the behind-the-scenes stuff that has to happen if an owner really wants other teams to say, "I wish we could do it like the Mets." Nobody has to beg or twist his arm to get him to make over the Mets into a state-of-the-art organization. This has already paid dividends, as cited by some of the players successfully signed by the club.

Teams go through good times and bad times. When the chips are down, or everything is on the line, there will always be a need for Mets fans to access that good old "ya gotta believe" spirit. But any leap of faith required won't require a world record caliber long jump any longer. It's a lot easier to believe when you are given tangible reasons for that belief. For the first time in many years, I believe that I will live long enough to watch that belief power the next New York Mets championship.

There's a famous line in the classic movie Willy Wonka & the Chocolate Factory. Gene Wilder's character admonishes the bratty Veruca Salt, who doubts the existence of snozzberries, "We are the music-makers, and we are the dreamers of dreams." It's actually the first two lines of a poem published in 1874 named "Ode" by Arthur O'Shaughnessy. Here is the rest of the first stanza:

We are the music makers,
And we are the dreamers of dreams,
Wandering by lone sea-breakers,
And sitting by desolate streams; —
World-losers and world-forsakers,
On whom the pale moon gleams:
Yet we are the movers and shakers
Of the world for ever, it seems.

O'Shaughnessy wrote this poem about the artistic spirit. It is one of the most hopeful poems ever written, yet the author's life was as bleak as a character in a Dickens novel. Born in England in 1844, O'Shaughnessy married at age 30, and sired two children, neither of whom survived infancy. He lost his wife Eleanor in 1879, then passed away himself a couple of years later from what was reported to be a "chill," contracted by walking on a rainy night. Not exactly a story that would end up in a Hallmark Christmas movie. But I have a feeling that Mr. O'Shaughnessy would understand the spirit of Mets fans, who dreamed wondrous dreams for years, only to wake up one day and realize that  — if you could only hold on long enough  — dreams actually do, sometimes, come true.

Great hail! we cry to the comers
From the dazzling unknown shore;
Bring us hither your sun and your summers;
And renew our world as of yore;
You shall teach us your song's new numbers,
And things that we dreamed not before:
Yea, in spite of a dreamer who slumbers,
And a singer who sings no more.

This is a great time to be a Mets fan. Please be well and take care, and Happy Holidays to all who celebrate.