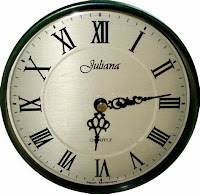 I've had a lot of time to think about time over the years, particularly as those years have accumulated and piled up on top of each other. I've had the opportunity to look at time when the vast majority of my own time seemed to stretch ahead of me, filled with a sense of promise and vagueness. I've been on time, in time, out of time. I've watched time go racing by past me, powerless to even slow it down. At other times, I had way too much time on my hands and wished it would just start inching forward and transport me somewhere else.

Nowadays, my own experience with time is filled to overflowing with memories of time already spent. I have collected an immense hoard of experiences over the years. It's almost impossible to have anything significant happen to me that doesn't evoke one of those previous chunks of my life, whether it is intricately recalled or just some vague feelings that, in one of those archived bits of past experience, I have found myself in very much the same now as the current one where time has capriciously deposited me.

One of the constant threads of my journey through time is my identity as a New York Mets fan. My time as a fan began when I was a child of 10 with very little understanding of the game. I knew the basics: 3 strikes, 3 outs, 9 innings, etc. I understood none of the subtleties. Seaver was a god, Koosman was a demigod. Even the lesser players, possessing no divine status at all, were adults while I still languished in childhood. They had put aside the childish things and lived lives that seemed much greater than my own while being, at the same time, hopelessly and unknowably opaque.

As I outgrew blind hero worship, the Mets of my teen years were low on talent and plum out of miracles. They traded Seaver for mere mortals at a time when it took an act of God for the Mets to score runs. As my teens ended, Koosman followed out the door. while Matlack was shipped out with John Milner for the immortal Willie Montanez and spare parts. Shea became a rusting, empty crypt, perfectly symbolizing the dying hopes entombed within.

I navigated my twenties and began tackling my own adulthood while the club metamorphosed from hopeless to hopeful to being the toast of the town. Suddenly it seemed, the Zacheries, Flynns, Falcones and Hodges evaporated and were replaced by Doc and Darryl, Keith, Gary, Lenny and Wally. A mortal man who purported to be Tom Seaver even made a brief return. A few years after they promised us the magic was back, it really was back.

Unfortunately, magic needs a layer of competent stewardship underneath or it eventually withers. The Mets of my twenties gave way to the Mets of my thirties. Whatever magic was left in old Shea was blithely shipped out of town by overmatched men for a pocket full of mumbles such are promises. Then, just when it seemed it couldn't get any worse, the game itself ceased to be for a time.

Baseball did come back, but the Mets teams of that era made a lie out of the saying that life begins at thirty. I was still short of 30 when the Mets fell to the Dodgers in the 1988 NLCS. The Mets didn't take part in another postseason until after I reached forty. There were no happy endings for that two-year return to relevance, but it was a cool, if somewhat exhausting, ride. I know I'm supposed to, but I just can't hate those black uniforms. For that portion of time, black symbolized life, hope and Piazza.

Ah, but it never lasts in the old ballpark in Flushing, Queens. As I slip deeper into my forties I am treated to a bloated Mo, the dried-up husk of Robbie, Super Joe, Jason Philips and Jeff Duncan. Armondo  punches a long, overdue ticket out of town, but somehow Tom f*cking Glavine sneaks in.

My forties fly by. Jose and David get a supporting cast and shine for what feels like a minute-and-a-half. I think there was a bit of awesomeness named Pedro for a few seconds of that time, but before I could wrap my hand around it a cold wind came up and blew it away. Shea was gone, something somehow called Citi took its place.

My years as a blogger fell in this time, late forties into fifties. The decades become less distinct now, distorted by their own heavy weight. If three words were all that I was given to describe that time they would be, in order, excitement, disappointment and disbelief. Wasn't there a cool guy named R.A. in there somewhere after all of that?

My fifties bring me one last exhilarating failed grasp for the brass ring. That guy Céspedes was a lot of fun to watch. Wish he could have stayed on the field. The Dark Knight came and went almost as fast as Pedro had in an earlier decade. David goes out with a whimper, a victim to the vagaries of anatomy. Others flash by, too, Thor and Juerys and Zack and Wibur. I think there was an Azdrubel in there somewhere, but I'm probably making that up. Jacob is the constant, Pete and Jeff are cool and new - hope they both get to stay a while.

I have six decades under my belt now. You would think all of that experience would lend some surety to how I see my life and how I feel about the club whose fortunes have intertwined for so many decades, yet everything feels more vague and up in the air. Certainty is a commodity that is in shorter supply than masks and ventilators.

There have been hectic times in my life, but nothing really could prepare me for this one. Puberty was easier, and trust me, I wasn't very good at it. No one bargained for the visit from this virus and all of the craziness it has brought along. Time is the comforter, as even this too shall pass and we won't have to grab a mask to head out in public someday.

I'm going through a personal tough time right now. On top of the difficulties of living in a pandemic, I suffered a pretty severe back injury about 2-1/2 weeks ago that is still kicking my butt today. I'm not looking for sympathy. Plenty are in worse spots than I find myself.

I was having a rough night with my treacherous body a couple of nights ago. I was restless and frustrated and the damned thing just hurt a lot. Looking for a distraction, I did some reading. I came across Greg Prince's piece on Al Leiter, Face of the Franchise, part of his A Met for All Seasons series on the blog. Greg does a great job, better than anyone I'm aware of, at evoking the feeling of a time and place in these works. I don't imagine that many who find their way to this Internet backwater aren't aware of Faith and Fear in Flushing, but if you haven't stopped by the place in a while do yourself a favor and check it out.

When times are tough, it's nice to take a vacation to a different time. Relive some memories and take a break. The latest one on Melvin Mora is great, too. Memory Lane is a nice place to visit right now. Greg's work is a great antidote to tough times.

I'm going to check out of here for a while now. The back is really barking today. Thanks for stopping by. Please stay safe.