It's Always About the Money 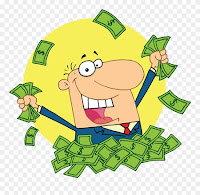 I saw this article from the New York Post today. Apparently the Mets had at least one offer for closer Edwin Diaz in the offseason, but have elected to try to "fix" him. First of all, I can only imagine at the offer(s) received, and wouldn't bet that there was much real value there. It's just the nature of baseball where other teams try to grab a damaged asset at clearance sale prices.

As bad as Diaz struggled last season, while certainly not endearing himself to Mets fans, he wasn't the "problem" from the Robinson Cano deal. The problem was the $100 million that Cano had left on his contract after the offset of the contracts the Mariners took on in return. Even if Diaz had lived up to expectations, handing that kind of money to a middle infielder for his ages 36 - 40 seasons, coming off a freaking steroid suspension, was bound to be a problem.

Barring someone buying the team without having to take on a lot of debt in the process, the Mets are going to be scrambling to hold onto enough of their own players and also sign others to remain competitive, especially with the extra stresses that the Coronavirus epidemic will put on their shaky finances. If the Wilpons are unable to sell the club, or even if they do manage to sell to a new ownership that is heavily leveraged, my honest fear is that we'll be watching another depressing teardown and rebuild strictly for financial reasons.

I saw an article on NJ.com speculating, based on something that Joel Sherman wrote about a few days ago, that Michael Conforto might be someone the Mets will be looking to trade to save some money. While obviously there is a lot of conjecture going on there, the idea that the Mets might be forced to make decisions about players based as much or more on financial considerations rather than baseball ones is chillingly plausible. While every club, even the best run, always have to consider money in any decision, it should only be part of the equation.

Back to Diaz, the kid just turned 26 in March. He wasn't good last year, but he was still throwing hard. If the decision was mine, I'd take a shot at fixing him, too. The one big worry would be that Mets fans won't have a lot of patience with him going forward. This trade has had so much negative coverage - mostly deserved, if certainly overhyped - that continued struggles whenever play resumes are going to be met with the outpouring of disgust and anger that have driven many other players out of this town.

As for Cano, we're likely stuck with him for whatever happens this year and 3 more years down the road. His first impression last season was awful. While he missed a significant amount of time, the 423 plate appearances that he managed to amass were barely adequate for a veteran stopgap a team might grab for a year or two while they were waiting for a younger player to develop. For $20 million per year, which is what the Mets are paying after the salary offsets, that just doesn't cut it.

For a rich, well-run big market club, a mistake like Cano might hurt, but you could work around it. The Yankees bombed out with their signing of Jacoby Ellsbury, but they survived it and finally cut bait with the oft-injured outfielder.  They also have a big, ongoing long-term investment in Giancarlo Stanton that isn't looking good right now, but no one is worried about them going into a 4 or 5 year rebuild if things don't work out with him.

For the Mets, on the other hand, a big monetary mistake, as the decision to acquire Robinson Cano is looking to be, is disastrous. I like some of the other things Brodie Van Wagenen has done since this trade, but that $20 million coming off every payroll through 2023 is depressingly ominous. His first move as GM could very well cripple his future efforts and possibly doom him. He could do almost everything else right going forward and still wind up failing.

The best outcome for Cano now would seem to be regaining enough of his hitting skills to at least be an above average offensive player, and hoping that the changes this epidemic brings to baseball would include a DH in the National League. Even in that scenario it wouldn't surprise me if the Mets got to a place before the end of 2023 where they would be better off cutting Cano loose and spreading ABs out to other players. Of course, in order to act like a big market club they'll need new, more solvent ownership. Then maybe I can stop worrying about their finances and get back to just worrying about my own.

Earlier today, Craig Calcaterra at NBC Sports' Hardball Talk  discussed the differences in the way the COVID-19 epidemic has progressed in South Korea as compared to here in the United States to caution against seeing baseball coming back there as a sign that a return is immanent here.

South Korea has 51 million people, just under 1/6 of the population of the US, packed into a country that has a land mass about 1/99th the size of the US. They've had just under 11,000 total cases and 254 deaths. We've had over 1.2 million cases and over 72,000 deaths. We're just starting to see spikes in other parts of the country, including places where Governors have made a political decision to open states where the infection count is actually growing.

South Korea had a very coordinated national effort to get the outbreak under control. We're trying to do it state-by-state, despite the fact that the virus doesn't give a damn about state lines. If we're lucky, the upcoming summer will slow the spread down despite ourselves. If not...

I hope to God we get it together, not only to bring baseball back, but also get us all back to work safely. It would sure be a shame if the sacrifices we've all made so far get cancelled out by political grandstanding.

Anyway, really excellent piece by Calcaterra on the subject.

I'll be back with a new post tomorrow. In the meantime, please stay well, everyone.