The Not So Funny Money Blues 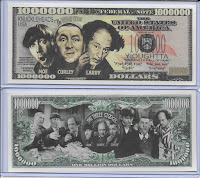 The big news of the day, which technically broke yesterday, is that MLB has finally made a concrete financial proposal to the union. Given the sense that a deal needs to be made fairly soon in order to meet the early July goal, I was honestly shocked that this hopeless proposal is what MLB decided to go with. It's fairly obvious that MLB doesn't expect the union to agree to the tiered salary structure they proposed. It's clearly meant to drive a wedge between the players and convincing a percentage of the public that the players are evil, greedy monster.

Let me get one thing on the record here. I don't think anyone should be paid what the top stars in baseball get paid. Being paid multi-millions of dollars per year for playing a game is insane. It's really hard for me to identify with someone making that kind of money, much less feel sorry for them taking a hit along with most of the rest of us during this pandemic. Then again, I feel pretty much the same way about the drastically overpaid company CEOs. It's just the way the world works today.

We would all do well to remember that there's a reason that the top players in baseball receive those crazy contracts. To put it simply, it's because owners give it to them. Baseball has been flush with crazy amounts of cash for quite a while. A premium is placed on signing star-level players who draw fans into overpriced ballparks to pay hugely inflated prices for food and libations that make those cash registers go ka-ching. Some of this big money trickles down to veteran players who offer value and help the club win, while very little makes it down to fringier roster fillers at the bottom.

Nobody holds a gun to an owner's head to force them to sign the big-ticket players to these huge contracts. They do it because top-tier talent is at a premium, and owners are more than happy to bid against each other to drive them up. It's their business, if they wanted to, they could set a budget and stay within it. They don't need to hand out nine-figure contracts, that's their choice.

Coming off of years of record profits, a smart owner could have made the decision to fortify their business for a disaster like this by putting something aside. I've been reading about the possibility of a virus that we had no natural immunity to coming around for years. Apparently folks who are smart enough to put themselves in the financial position to buy teams aren't smart enough to put something aside for when the unexpected happens.

The idea that the highest-paid players should be willing to take the risks of playing ball for a small percentage of their prorated contract is absolutely insane, and MLB knew that when they presented it to the players. I wouldn't agree to play under those terms if I was in their shoes. MLB management seems to have more interest in scoring points in the PR war against the players than getting a season played. Last week it was a smoking-gun email, this week it's a gotcha proposal with no chance of being accepted. Meanwhile, the clock ticks relentlessly onward.

It may not matter, but I still strongly feel that MLB ownership has a lot to lose here. If they succeed in making the public see the players as bad guys, it devalues a product (baseball) that is most dependent on the fans love for these same players. In our case, the New York Mets aren't some vague concept packaged with a logo - it's Jacob deGrom, Pete Alonso, Jeff McNeil, J.D. Davis, Brandon Nimmo, Michael Conforto and the rest. If we come to resent them for some reason, you can bet the farm that it devalues the entire product of Mets baseball.

If you are a club owner, you could hurt your players in the short term by not coming to terms on a deal to play in 2020. They simply won't get paid. But it's you that has the long-term interest in protecting the game. Your business depends on it. Why don't you move on past all of the posturing and gamesmanship and do what's in your selfish best interest? Put the game back in front of fans.

I'm going to keep things a bit briefer today than normal today. I'm still dealing with a sciatica problem that has had me tied to my couch for almost a month. I had to go for x-rays and some other tests today. It took a few hours, and the effort required really exhausted me. Still, I'm happy for the chance to figure out what's keeping me down and get back to a more normal life. A couple of items to wrap things up:

In a piece in the New York Post, Joel Sherman doe a nice job breaking down what's at stake, and had what I thought were some really clever ideas for how the two sides might bridge the gap.

Finally, if you're interested in more specifics on MLB's proposal, Jay Jaffe has a very good breakdown at FanGraphs. I understood the proposal much better after I read it, and I also believe he was absolutely on the money with his conclusion:


Right now, however, all of this has a very 1994 feel, with two entrenched sides playing chicken as the clock runs down. At the moment, even without considering the various needles that need to be threaded with regards to the health and safety protocols, the possibility of a 2020 season may be slipping away.

I've felt all along that there was a lot of incentive to play in 2020 that might enable us to get past posturing and worthless point scoring. MLB waiting two weeks to make such an obvious non-starter of a proposal is admittedly causing me to question my earlier optimism.

Take care, everyone, I'll be back in this space tomorrow. Hope to see you then. Please stay safe.