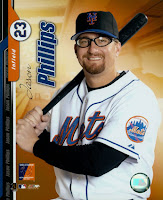 In March of 2005, Mets GM Omar Minaya was scrambling to find a starting pitcher to replace Steve Trachsel, who just had surgery for a herniated disk and would miss most of the season. He reached a deal with the Dodgers to obtain 31-year old lefty Kazuhisa Ishii in exchange for catcher Jason Phillips.

Phillips was an interesting story during his short time in New York. After very brief stints in the majors in 2001 and 2002, Philips broke out in a big way for the Mets in 2003 at age 26, batting .298/.373/.442 with 11 HR and 58 RBI in just over 450 plate appearances. The distinctive corrective goggles that Phillips wore became part of his legend, with some fans nicknaming him GGOG, or Greek God of Goggles, as I remember it. He was one of the few bright spots on an abysmal 66-win club, and Mets fans, including myself, prayed that it wasn't just a fluke.

Sadly, it was. Phillips' numbers dropped precipitously in 2004, and by 2005 it was clear that his ceiling was nothing more than backup catcher. He played in the major leagues for 7 years, amassing just over 1,500 plate appearances. His career slash line was .249/.314/.370, which was bad enough during the steroid era, but looks a lot worse when you take out the one outlier season. Phillips also earned distinction from the Hardball Times in 2006 by being named Baseball's Slowest Player.

Kazuhisa Ishii had an interesting career arc, too. Signed out of Japan by the Dodgers in 2002, Ishii was an instant success that season. He won his first 6 starts, and was named NL Rookie of the Month in April. He wound up winning 14 games for the Dodgers that year, but his season ended abruptly on September 8 when he was struck in the head by a line drive off the bat of the Astros' Brian Hunter, requiring facial surgery to repair the damage.

Kaz Ishii's fast start his rookie season was part of a pattern. In his 3 years with LA, Ishii would consistently perform better in the first half of seasons than in the second half. His cumulative ERA of 3.50 before the All-Star break jumped to 5.77 in games played after the break. Another constant with Kazuhisa Ishii was his uncommon generosity in handing out bases on balls to opposing batters. Over 3 seasons in LA he issued 305 free passes in 473 IP, an average of 5.8/9 IP. He was stingier allowing hits, but prone to gopher balls.

When the Mets picked him up, the hope was that Ishii might continue his trend of fast starts. Maybe Trachsel would come back or somebody else would turn up when the lefty began his second half fade. Unfortunately for the Mets, Ishii was bad from the start. While his walk rate dropped down to the lowest of his MLB career, a still awful 4.8/9 IP, his hit rate jumped up and his proclivity for giving up the long ball remained.

Ishii's first start for the 2005 Mets came on April 7 in Cincinnati, where he got torched for 6 runs in what Mets fans would soon recognize as a quintessentially Ishii-like performance. The lefty only allowed 2 hits and struck out 7 in 6.1 innings, but he allowed 4 BB, 1 HBP and a HR.

He had perhaps his best performance for the Mets in his second time out, dueling Roger Clemens to a 0-0 tie through 7 in a game the Mets would go on to win, but followed that with an awful loss to the Phillies where he allowed 12 baserunners and 5 runs over 5 ineffective innings.

Ishii pitched 3 times in May, sandwiching 2 solid starts around a real stinker of a performance in Atlanta, allowing 7 runs in 4 IP, done in by 7 hits, 3 walks and a HR.

It was in June that Kazuhisa Ishii turned truly and consistently awful, pitching to a 6.83 ERA over 5 starts, allowing 33 hits and 11 walks in 27.2 IP, 7 of those hits leaving the ballpark. It was during this stretch that the fans turned on the erratic lefty. The decision to keep running him out there seemed to be just willfully throwing games away. Manager Willie Randolph got most of the blame from the fans for stubbornly staying with Ishii but, as with so many bad decisions by the Mets over the years, the blame probably belonged with upper management, too.

Ishii actually had one very solid performance for the Mets in July, beating the Padres with 6 shutout innings for his third - and last - win as a Met. The win was sandwiched in between 4 bad performances, however, with a 4 inning, 5 run performance against the Astros on July 31 serving as Ishii's swan song as a starter for the Mets. Three relief outings in late September closed out his career as both a New York Met and in America. He was released by the Mets that December and went home to Japan for good.

The 2005 Mets had some fairly glaring weaknesses. Their offense was inconsistent, Mike Piazza was only a shadow of the hitter he had once been, Kaz Matsui was proving to be a bust, Doug Mientkiewicz contributed little on offense and Miguel Cairo managed to get 327 AB despite a ridiculously low OPS+ of 65. Their bullpen was a regular horror show from the moment Braden Looper blew Pedro Martinez' first start.

There were many frustrations in 2005, but none worse than watching Kaz Ishii put the Mets into a deep hole almost every time out, mostly because he couldn't consistently throw the ball over the plate.

What annoyed most was that Ishii had some good stuff, a tricky delivery and could really dominate at those rare times when he put it together. He also had a knack for looking decent for a couple of innings and then just losing it before you knew it. He always contributed to his own downfall by issuing so many free passes. It was an extremely frustrating experience to watch him pitch.

Baseball Prospectus has an article on their site listing the best and worst strike throwers in the period from 2001-2008. Ishii was in the bottom 5 of pitchers with the lowest strike percentages. He was joined there by his 2005 Mets teammate Victor Zambrano. Yes, Mets fans in 2005 were treated to starts from two of the worst strike throwers of their era. Ya gotta believe that this led to a dependence on antacids for many of us.

Some clubs acquire a player like Kazuhisa Ishii, watch the deal go south on them and make a decision to cut bait and move on to a different option. Not the Mets. They always seem to compound things by sticking with their mistakes for way too long. They handed Ishii the ball 16 times to start games for them in 2005, often receiving atrocious outings in return that sucked the life out of the team and its fans.

When the Mets finally did take Kaz Ishii out of the rotation, it opened the door for Jae Weong Seo to return from the minors and take over. He was as good in his spot in the rotation as Kaz Ishii was horrible. In 14 starts he went 8-2 with a 2.59 ERA. He put up an unimpressive 5.9 K/9 rate, but only allowed 16 walks in 90 IP. His strike throwing was a beautiful thing to watch after a half season of Ishii.

The biggest change in Seo from his trip to the minors was his addition of a breaking ball to this arsenal, along with a splitter. The Korean righty had been sent down because of his stubbornness in sticking with just a fastball and changeup, despite the urgings of pitching coach Rick Peterson to add to his pitching repertoire. Two pitches worked for Seo when he brought mid-90s heat when he first signed with the Mets, but after Tommy John surgery his velocity dropped to around 90 and Jae Weong Seo needed to learn how to pitch.

The new and improved Jae Seo seemed to be staking a claim to a future in the Mets rotation, but wound up being traded to the Dodgers after the season for reliever Duaner Sanchez. Seo only pitched 67 ineffective innings for LA before moving on to the Tampa Bay Devil Rays, where his career in the US petered out just 2 years after he seemingly turned it around. At age 30 he returned to Korea to finish his career.

Thanks for stopping by today and taking a trip back in time with us. Please stay well and safe. We'll be back tomorrow.

My Series on the 2005 Season:
A Celebration of Mediocrity
The Year of Pedro
The Goats of 2005: Braden Looper
The Goats of 2005: Kaz Matsui
Great Games: June 11, 2005 Mets vs. Angels
Beltran, Then and Now
We Can Be Heroes, Just For One Day
The Year We Said Goodbye
Flash in the Pan, Part 1
Flash in the Pan, Part 2
Walking the Ballpark (This Post)
Out of Nowhere
A Pyromaniac's Delight