I'd like to start today's post with some good news, because we all know that's been in short supply lately. According to this article in the New York Times, real progress is being made on a possible vaccine for Coronavirus by Moderna, a company in Cambridge, Massachusetts. If you haven't seen the news yet, I have to caution that the results are still preliminary in the extreme. Still, here is the money quote from the article:

The findings are based on results from the first eight people who each received two doses of the vaccine, starting in March.

Those people, healthy volunteers, made antibodies that were then tested in human cells in the lab, and were able to stop the virus from replicating — the key requirement for an effective vaccine. The levels of those so-called neutralizing antibodies matched the levels found in patients who had recovered after contracting the virus in the community.

The article goes on to say that the second round of testing will start soon. If that goes well, the third round would begin in July, with an actual public vaccine possible by late this year or early next. Needless to say, this effort is being fast-tracked. No guarantees here, but some genuine good news to hang our hopes on for an eventual return to a normal life for all.

It's been a number of years since I've been to Citi Field in person. There were times when I was too broke to justify the expense, and when I had money it was usually because I was working crazy hours. From where I live, a day at the ballpark literally means a large percentage of a literal day of my life.

Still, if we have an effective vaccine by next year that's available to everyone, I'm definitely going. Even as someone who is quite comfortable being alone, I am truly social-distanced out. The idea of hanging out with a few thousand strangers who also love the Mets sounds really, really good to me right now.

Reluctantly heading back to reality, after spending the weekend digesting all of the safety protocols that MLB is proposing, it really struck me how very different the game will be to watch if they manage to bring it back this year.

Back in March, when those in authority first started talking about shutting things down to prevent COVID-19 from spreading out of control, I didn't spend a lot of time thinking about worst-case scenarios. When spring training shut down in mid-March, I didn't really allow myself to think about how long it might be before baseball returned. When my state shut down most businesses a week later and I found myself out of work, I hoped that it might only be a matter of a few weeks and things somehow would just return to normal.

Looking back, I understand that this magical thinking was simply a result of not wanting to think about how different my life was going to be while I was still trying to process what was happening. I think the same game was going on in my head when I thought about baseball coming back. Intellectually, I knew it would be different, but I dwelled more on how much I wanted to watch real Mets games than on what it would really look like in our current reality.

I mean, I knew it would be quiet without fans in the stands. It will be weird when the Mets are home and someone makes a huge play, only to be met with the scattered cheers of players and coaches interspersed by safety guidelines throughout the dugout and stands. My mind is conditioned to hearing the ballpark go crazy when the big things happen. That's why good announcers will often step back and let the game speak for itself at those golden moments. 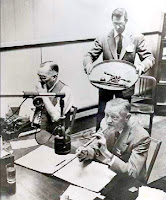 Back in the years before even I was born, before people even had televisions in their house, games were broadcast on radio. Since a given about radio was that you couldn't actually see what was happening, it was an unnecessary expense to send a play-by-play guy on road trips and transmit his broadcast back to the home city. They used to call away games using a teletyped description of the action from someone who was in the city where the game was played transmitted back to the announcer in a studio. Using the description and canned sound effects, the broadcaster would recreate the game for the local radio audience.

I have this weird picture in my head where Gary, Keith and Ron are broadcasting Mets games, utilizing canned crowd noise to recreate the live energy lacking while playing in near empty ballparks. Carrying that a step further, what if SNY decided it was cheaper and safer not to send a crew out to cover away games? Maybe just pay the other team for their feed and augment it with some old-fashioned sound effects? Who would be in charge of banging the piece of wood to simulate the sound of a hit? I vote for Keith who is, after all, clearly the best hitter of the trio.

Putting these flights of fancy aside, now that the return of baseball is, at least, in process of becoming a reality, it's time for me to come to an accommodation to what will surely be the sheer weirdness of it all. If I've learned anything since early March, it's simply to accept that nothing will be quite the same until a vaccine and herd immunity brings us back to the version of life that we used to know. And, because the past is prologue, there really isn't going to be any way that we'll ever get back to exactly what we had before this sh*tstorm dropped upon us.

Most guys my age don't embrace change. I've had six decades on this earth to learn what I like, what I don't like, and what makes me happy. I'm not such a curmudgeon, however, that I rebel against any change at all. I learned to embrace computers and smartphones and the realities of a connected world. I'm still willing to give something new a chance to worm its way into my life if I can foresee any possible benefit from it, but I'll fall back on what's comfortable in the end if the reward doesn't justify that change.

Amidst all of my real-world worries and concerns, it's the sheer amount of changes and adjustments to those changes I'm forced to make on an ongoing basis that gets me reeling at times. I know if I'm lucky enough to get Mets baseball back this season I'm going to have to fight against the feeling but it's so different... This time, I'm trying to prepare myself in advance for what is, rather than what I wish it would be.

Jayson Stark posted a piece on The Athletic site Friday (subscription required), posing some questions about what would happen to players who chose not to play if baseball returns. The questions are more complicated than they might seem at first glance. If a player or someone in their immediate family have a pre-existing condition that puts them at increased risk from the virus, will they still be paid if they don't play? Will players who don't play accumulate service time?

It is highly doubtful that even a healthy player that doesn't want to risk playing can be forced onto the field. Would that player be treated the same as another that can point to a documented existing health risk? I'm sure that the owners would balk at that.

One of the owners' hopes surrounding a revenue sharing solution would be that the players would have to decide how to divvy up the money. Presumably then they wouldn't have to decide which players got paid and how much. But even in that case there still would be the question of service time. There are so many difficult negotiations ahead for both parties. That early July start for baseball looks more unreachable by the day.

The most immediate concerns in the here and now circle around whether the framework of a potential agreement can even be reached. It's all moot if there isn't even a season. Still, big, complex questions loom ahead in negotiations if MLB and the players can clear the initial hurdles. The questions surrounding those who elect not to play will most certainly be among the thorniest.

To finish up with something fun, how cool would it be if the Mets took a flyer on bringing Bartolo Colon back this season? I know he's 46, didn't pitch last year and hasn't been a very good pitcher since his last season with the Mets in 2016. Still, in a gloomy year where any light is valuable, maybe the Mets could get him back for a reasonable price tag.

It seems likely that, should a compressed season get underway, the Mets are going to need pitching options beyond what they currently possess. If I had any say in the matter I would at least have him throw and see if there was anything left in the tank. Besides, having Big Sexy back for an encore would be at least worth a few badly needed smiles.

That's it for me today. Please stay safe and well. I hope to see you back here tomorrow.