How Not To Take Responsibility 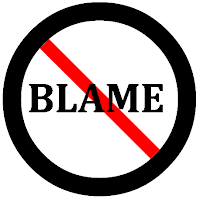 One of the lessons I had to learn for myself in life was about personal responsibility. It wasn't an easy lesson. While I was basically an honest person when I was younger, if I found myself in a tough spot through my own fault, all too often I found myself looking for any kind of loophole to escape personal responsibility on my part. It didn't matter if it involved lying my way out, I was quick to abandon my personal principles if it got me out of something that I didn't want to deal with.

What I learned the hard way over time was that the cost of evading responsibility in this manner was often higher than the cost of just admitting that something was my fault and dealing with the consequences. Plus, I could look myself in the mirror afterwards without cringing. It's never any fun to take personal blame, and it's not something I look forward to, but in the long run I think it matters. For one thing, you can't fix a mistake that you're not willing to admit to.

I had to chuckle when I read this article on ESPN. In an interview with the AP, Rob Manfred acknowledged how much the protracted, pointless negotiations angered fans, and offered up the following quote:


We need to get back on the field, and we need to in a less-charged environment start to have conversations about how we -- and the we in that sentence is the commissioner's office, my staff, the clubs and the MLBPA and the players -- can be better going forward. We owe it to our fans to be better than we've been last three months.

At first glance it looks like Manfred was taking some personal responsibility for the way things had gone these last few weeks, but that "we" got awfully big, didn't it? I'm not questioning the fact that the different entities that Manfred mentioned - his staff, the clubs, MLBPA and the players - all had a hand in how badly things went down, but personal responsibility is really nothing if it's not, well, personal. Manfred didn't even point a finger directly at himself, but rather at "the commissioner's office." I guess that's him, but it's certainly an indirect way of taking some blame, and then he made sure we knew about everyone else who needed to do better.

This might seem like nit-picking, but I think it's important. As Commissioner, Rob Manfred was in charge of MLB's side of the negotiations. While it's understood that he answers to all of the owners, the buck still stops with him. He received a lot of criticism as things fell apart, and he deserved it. Sure, the others he named share some blame, but Rob Manfred can't control what they do, only what he does. It would have meant something if he just said, "I need to do better next time." It would have showed that he was serious about changing things. Instead, his words reminded me of the way I used to rationalize things to myself. Manfred sounds more like a trained lawyer than a real leader. It sounded good, but what he said was essentially nothing.

There have been plenty of missteps to go around these past few weeks, but the path that MLB chose to follow was incredibly unproductive. Baseball is crying out for a leader right now to bridge all of the deep divides in the sport, and Manfred can't even do honest self-criticism without referring to himself in the third person and pointing fingers at others. The guy just isn't a leader, and he has more than proven himself to be the wrong man for a very difficult job.

A couple of interesting pieces have come across my news feed in the past few days about what could be a lost year in prospect development. One is by Ken Davidoff in the New York Post, the other by Keith Law in The Athletic. Both make excellent points about the way that teams are reaching out to their minor leaguers to try not to let 2020 be a completely wasted year in their development. They point out how some of the top prospects will undoubtedly land on the taxi squads in an effort to get some hands-on work this year.

Davidoff had a quote from an email exchange from Jared Banner, the executive director of player development for the Mets about how committed they are to not letting the pandemic cause this to be a lost year in development for Mets minor leaguers:


Despite the lack of baseball currently, we don't believe in making excuses. There is always a way to improve, and it’s our responsibility to be innovative and provide our players with safe ways to do so until we can get back on the field again.

I like the sound of that, but I would really expect any club that's serious about developing players would figure out how to get at least the best prospects together for some actual hands-on training at the training complex or somewhere else. I know it's difficult, and Florida is having some difficulties with the coronavirus, but I don't see how you couldn't manage to identify the 30-40 guys that have any chance of making it on a major league roster someday and have some kind of extended camp for them, at the very least.

Even if it only lasted for a month, you could at least guide them through some things they need to work on for next year. Sure, it wouldn't be the same as minor league camp and then a full schedule of games, but it would be better than zoom meetings and such. I just can't believe that you couldn't find a way to make that happen rather than risking your investment in these players by allowing them to lose a full year of crucial development.

In Law's piece, he quotes an unnamed NL executive about one of the biggest potential dangers of failing to get some development in this year for last year's draft picks:


"Players drafted last year — I feel terrible for them. They had limited innings or at-bats last year because they were gassed. They work their tails off all winter. They’re in spring training in two weeks. Now they might not play at all this year. And if we lose a short-season club (to minor-league contraction), you go into next year, all those guys have to jump a level."

I don't think a smart organization can count on MLB pulling off some sort of expanded Arizona or even Arizona and Florida fall league. It may not happen, and even if it does it might not be the best place for younger prospects.

The news just came out as I am typing these words that the Mets signed their first round pick Pete Crow-Armstrong. Now they have to ensure that they give him the tools to succeed. No excuses.

That's it for me today. Thanks as always for spending some of your time here today. Please come back soon. In the meantime, please stay safe, stay well and take care.