Some Thoughts on McCann, Arenado and Springer 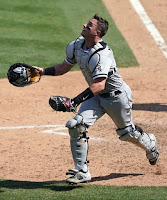 After listening to some of James McCann's press availability, I came away impressed with the Mets new catcher — at least as a person. I have a pretty good feeling that the Mets pitchers are going to like working with the guy. After a couple of years of reportedly not being very happy with Wilson Ramos, this is a big deal. As for the rest, only time and a chance to see him play will provide an answer to whether or not this was a good signing. He doesn't have to win a silver slugger award to be an asset to the Mets, he needs to hit enough to justify a starting job and do the job defensively and handling the pitching staff.

Ken Rosenthal had a piece in The Athletic that discussed why the Mets ultimately went with McCann over J. T. Realmuto. Mets fans are already familiar with the reasons. Alderson discussed them at Jared Porter's press conference. Basically it was a question of timing. However, Rosenthal cites some unnamed executives and agents who expressed the view that both the Mets and Realmuto made a mistake by not working things out. As I said, time will tell. No doubt this signing represented a gamble on the part of the new front office.

Rosenthal's article wasn't the only one that expressed reservations about McCann. Keith Law also took a rather negative view of the deal in another piece in The Athletic. But there have also been some really positive things written about the guy, too. By all accounts McCann is able to take a clear-eyed look at the areas where he's been lacking and do the work to get better.

There was a piece in the Daily News earlier in the week where the author, Bradford William Davis, interviewed Jerry Narron, who worked with McCann in the offseason of 2019 - 2020 on his pitch framing. This had been a glaring weakness in McCann's game. As far as Narron is concerned, McCann's dramatic improvement in framing last season was no fluke:

"[McCann] deserves every bit of credit for all the improvement he made over the past year. It's rare to see somebody make that kind of improvement...

...I just showed (McCann) a couple of things. He worked extremely hard at it and carried it over...

McCann had previously overhauled his offensive approach and turned his career around after being jettisoned by the Tigers. I'm sure part of what the Mets are banking on with the guy is his willingness to work on his weaknesses and the success he's enjoyed based on that work. I have a pretty good feeling that this signing is going to work out okay for the Mets, as long as he hits enough.

One ongoing concern with McCann that Law identified in his article was his problems hitting right-handers even after his offensive breakout. A significant part of the problem is how often he strikes out against them. In the two years that he put up overall good offensive numbers, he struck out 132 times in 472 plate appearances against righties. That's about 28% of the times he faced them. That's something to be concerned about, and maybe argues for the Mets to try to find a left-handed batting catcher to pair with McCann. Tomás Nido, the backup as things currently stand, is also a right-handed batter.

There has been a lot in the media recently about the possibility of the Mets trading for Rockies 3B Nolan Arenado. I have to admit, there is a part of me that loves the idea of having the guy as our third baseman for he next two or three years. He's a Gold Glover, and is a right-handed hitting middle of the order bat, which is something the Mets can certainly use.

A big stumbling block is the contract. Arenado is signed through his age 35 season, which isn't too bad. Barring an injury, he's likely to remain decently productive until the end. The problem, at least as I see it, is the money. For the next 4 years, his age 30 - 33 seasons, Arenado will be pulling down a cool $35 million per year. The last 2 years, his age 34 and 35 seasons, he'll be making $32 million and $27 million. It's not completely crazy, by any means, but given where we are with plenty of concerns about how next season will play out, it's not a contract that I would be comfortable giving the guy if he was a free agent.

But, of course, he's not a free agent. Colorado is going to want a decent package in return for the guy. Just exactly what they would be looking for would depend on how much of that contract the Mets took on. If the Mets got Colorado to take on a decent chunk of it, they would need to give up more in talent to get the guy. The Mets are already quite thin in prospect talent, as we all know.

If Colorado was more interested in salary relief, they would presumably settle for less talent. While that would be helpful, I would certainly believe that taking on much of Arenado's salary would take the Mets out of the bidding for any premium free agent like George Springer or Trevor Bauer. It would also make it somewhat harder to sign Michael Conforto to an extension, and probably fairly impossible to keep both Conforto and Noah Syndergaard beyond this season. We don't know exactly where the Luxury Tax threshold will go under the new CBA to be negotiated but, if times are tough economically, it's hard to see it going up much, if at all.

Arenado is a great player, but taking on most of that contract while also giving up talent in return feels like a Brodie Van Wagenen move. While the Mets do have a lot more moolah to spend under Steve Cohen, I don't think they want to saddle themselves with too many big contracts in his first year running the team. Sandy Alderson and Jared Porter don't want to find themselves in a place two or three years down the road where the weight of player contracts robs them of flexibility to make moves.

Really, the only way to keep multiple expensive contracts at one time while maintaining a non-ridiculous payroll number is to have a productive farm system that allows you to have enough good, cheap players on your roster to balance those contracts out. The Mets aren't that team today, and giving up some of their talent while taking on a significant contract doesn't seem the best way to get there, at least not to me.

In my opinion, free agent George Springer is a better option for the Mets than Arenado, as long as they can agree to a reasonable deal in years and money. Springer will play next season at age 31, so the hope would be to get him on a 5-year deal for about $125 million. If the bidding somehow got much beyond that in years and/or money, it would probably be time to move on to Plan B. Signing Springer would also cost the Mets their second round pick. That would hurt a little, as the Mets are sitting 10th in next year's draft, but would surely represent less than what they would need to give up to get Arenado.

As much as any fan, I'd like to see the Mets upgrade their roster in a meaningful way this offseason. However, I don't want to see them do what the Yankees did by trading for Giancarlo Stanton — putting themselves into a payroll situation that robs them of flexibility in future seasons. This is supposed to be a multi-year plan where the Mets would be best positioned to take a run at a title a bit further down the road. Managing the contracts they take on today wisely will allow them the freedom to make significant moves in future seasons, too.

That's it for me today. Please stay safe, be well and take care.