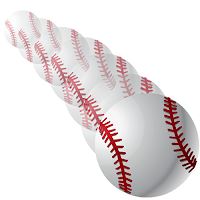 Last year before the start of spring training, there was talk that MLB would be cracking down on the use of substances by pitchers to enhance their grip on the baseball and increase the amount of spin on their pitches. This, in turn, is one of the contributors to ever-increasing strikeout numbers in baseball. The topic took a back seat to worries about surviving a baseball season during a pandemic, but it's back now this spring as the country slowly moves towards a post-COVID world.

There was always some understanding among people who closely followed the game that the amount of spin pitchers could put on a baseball was important. It affects the movement of a pitch, whether it's a breaking ball or a fastball. Moreover, high-spin could affect the lateness and sharpness of the break. A pitch with a relatively late, sharp break is more difficult to hit than a pitch with a lot of break that takes place more gradually and predictably.

Sometimes when you read about all of the spin rate emphasis, it sounds like this is something new in baseball. It's not. What's relatively new is the sophisticated equipment available to track the spin pitchers are imparting on the ball. This allows more sophisticated analysis and coaching for pitchers to achieve maximum results. That, of course, is all perfectly legal.

Of course, the knowledge that getting more spin on pitches is important tempts pitchers to use substances to better grip the ball. In Joel Sherman's piece in the New York Post linked above, Sherman notes that MLB plans to use some of the fancy technology to catch pitchers who are artificially increasing their spin rate. The consequences could have a huge impact on modern pitching:

MLB's Statcast system allows the tracking of every pitch — its velocity, spin, and movement. MLB intended to use the data to compare with both career norms and in game to see if, say, a slider suddenly had more revolutions with runners on second and third in the sixth inning than with no one on in the first.

This could have seismic impact. There are those who believe that some organizations have worked to develop substances to help entire staffs improve their stuff and that removal could lead to significant decline in performance.

It's no secret that the use of illegal substances has become pretty widespread in the game of baseball. The current thinking is that most of the pitchers in MLB are using something at least some of the time. No one wants to challenge other team's pitchers because they know that their own are doing some version of the same thing.

Now I don't believe that any MLB crackdown on illegal sticky stuff will lead to a dramatic decrease in strikeouts and more balls in play, but it will probably help. I'm curious, though, how they're planning to do this with Statcast. I don't think it would be wise to penalize a pitcher based just on that data. I would expect that a funky Statcast result would be used as justification to search a pitcher to find if he's using something illegal. I would expect that only if they find something would a pitcher be penalized. This will bear some watching as the regular season begins.

In The Athletic earlier this week, Tim Britton discussed how the Mets — finally taking advantage of some of the modern technology with the Wilpons gone — are attempting to turn reliever Jacob Barnes into a "development win." Barnes came aboard as a waiver pickup last fall after he was cut loose by the Angels. I was surprised at a couple of points this winter when the Mets elected to keep Barnes on their 40-man roster while electing to let some other players go.

Barnes was a solid reliever for the Brewers from 2016 - 2018 but has struggled since then. Kansas City got Jacob after the Brewers waived him in 2019, but they released him after the season. The Angels took a chance with him, but he was not effective for them in 2020, so they waived him after the season. The Mets picked him up in a move that inspired a big "who cares?" from me. The bullpen was awful in 2020, so I understood it when they took Jacob Barnes off waivers, but I thought it was quite unlikely that he would be a part of the 2021 Mets.

Of course, I didn't know the backstory that Britton related in his piece. Mets pitching coach Jeremy Hefner got in touch with Barnes soon after the Mets picked him up with suggestions for changes that Barnes could make in his approach:

"We got on to the analytics of my stuff, and he started saying some things, and I was like, 'Wait, what?'" Barnes said over the phone from Port St. Lucie last week. "I was absolutely confused because prior to coming over here, I was never given that knowledge or that information to be able to use. So obviously it caught my interest quick."

The two talked for over an hour. They'd catch up a few more times over the winter, each time Barnes learning more and more about what Hefner had seen in him and what he could be with New York.

In previous stops with the Brewers, Royals and Angels, Barnes has relied on a single plan of attack: throw four-seam fastballs down and away to right-handed hitters, and work off that pitch with precision command of his east-west breaking ball — something between a cutter and slider. Hefner told him to be more open-minded: Why couldn't he throw that fastball in on occasion? What about working up in the strike zone to take advantage of his fastball’s natural ride? Had he thought about a change-up?

Barnes enthusiastically adopted Hefner's suggestions during his offseason. He worked on holding that ride with his fastball even in games of catch. He tinkered with a change-up he had scrapped years earlier that could work well off a more elevated fastball.

Hefner wasn't asking Barnes to remake himself as a reliever, just to change how he used his pitches to more effectively compete. Given that Barnes still has solid fastball velocity, the tweaks that he and Hefner have made are showing signs of turning Jacob Barnes' career around. Barnes looks like he could potentially be an effective middle reliever with the upside of contributing to the late-game high leverage relief. That alone would be a big developmental win.

As with anything Mets-related that takes place in Florida in March, we need to see what happens in April and May to fully validate the results. However, the implications for a bounce-back from Jacob Barnes are more important than just the potential addition of another solid bullpen piece. A success story with a player like Barnes sends a signal to the rest of baseball that things really have changed in New York. It shows that the Mets are equipped to help players realize their full potential, which will help them be more attractive to any player they hope to lure to New York.

Moreover, I honestly questioned after last season if Jeremy Hefner had shown that he should be the pitching coach. Hefner didn't have much success with Rick Porcello, Michael Wacha, Steven Matz, Jeurys Familia, or the rest of the Bad News Mets pitching staff. Hefner's one big success seemed to be helping Edwin Díaz to bounce back from his awful 2019 campaign. In fairness, it was tough to judge Hefner from afar, given the restrictions of the COVID-19 pandemic and the mostly-awful crew of pitchers he was given.

I still reserve some judgment to watch what the regular season brings, but I'm more and more confident that Hefner is the right man for the job. While Jeremy doesn't need my seal of approval to do his job, it sure as heck makes me feel better about the pitching coach of my beloved New York Mets.

That will do it for today. Please stay safe, be well, and take care.