What Needs to Happen

I was doing the dishes and some laundry this morning, two fairly necessary but quite boring tasks. We have a Google Hub Max in the kitchen so, to divert my attention a bit, I put on last night's Baseball Night in New York from my YouTube TV DVR. I know, I know, a lot of it is mindless sports talk radio-caliber stuff, but some of it can be pretty good. Former Met Anthony Recker, in particular, can be funny and say really smart things sometimes. SNY's Andy Martino can be irritating at times, but he could be interesting, too. It depends on the day. At least with the DVR, I can skip the really dumb stuff along with the commercials.

They had a segment on discussing over and under predictions for the Braves and the Mets, with both Dan Graca and Marc Malusis picking the Braves to win the division. They both picked the Braves as over 91.5 wins and the Mets under 90.5 wins. It didn't particularly break my heart. I'm not a Malusis fan at all and fairly ambivalent about Graca. But it popped into my head to question what I would say if someone posed the same questions to me.

I would think that a solid majority of pundits would give the Braves the edge over the Mets for the Division. I don't spend much of my time following the Braves, so I have no idea what issues they might be facing this year. They've won the Division three years in a row and are returning their top players, so it's hard to argue against them. Barring too many injuries or bad performances from their pitching, I wouldn't bet against them being a 90+ win team.

The Mets are a lot tougher to prognosticate. There can be little doubt that they have the pieces in place to challenge all season. However, losing their second-best starter and a top reliever for a couple of months really points to the fragility of any team's chances.

Even the deepest teams with fully-stocked farm systems can lose enough key players to sink their chances. It's just a question of numbers. In previous years under the Wilpons, the Mets would almost always succumb to injuries. There never were enough talented reinforcements to survive. While the current regime gets gold stars for their work in building some real depth, there are practical limits that we're already approaching.

For the starting pitching, having a healthy Carlos Carrasco would undoubtedly have been a better situation heading into the season. The offseason additions of Taijuan Walker, Joey Lucchesi, and Jordan Yamamoto at least provided a layer of competent depth of Major League-caliber pitching that gives the club a chance to survive Carrasco's injury. But it's fair to point out that the deeper the Mets go into this depth, the less likely they are to put together a 90+ win campaign, particularly with the Division looking so very tough in 2021. To make things even a little dicier, you have to cross fingers, knock wood, and hope that none of our starting pitchers gets hurt batting or running the bases.

Depending on whether your glass is half-empty or half-full, you can look at the 2021 Mets bullpen and see the bones of a capable 'pen or identify the anchor that will drag the Mets season down with it. I'm probably halfway between those two positions — I see true potential, but they're going to have to prove themselves during the regular season. Of course, they're going to need to stay healthy, and Lugo needs to return and be effective.

I'm very optimistic about our offense, with the usual caveat that health matters with the position players, too. I'd be surprised if we didn't score enough runs to win 90+ games. While I understand that neither defense nor baserunning will be a strength of this club, they simply must tighten things up in both areas.

My concern about baserunning isn't really about stolen bases. It's about all of the times last year that runners didn't score from second on a single or from first on a two-base hit. It's hard enough to get big hits to score runs. Needing extra hits to do the job is inviting failure to happen. Within reason, I'd rather see a few guys get thrown out trying to score than constantly seeing runners hold at third when they should be scoring. 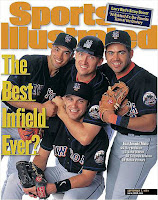 Barring a last-minute change of heart on the universal DH — which seems really unlikely, but who knows with MLB? — we know that the 2021 Mets defense will not win them an SI cover as best-ever anything. What we can reasonably hope for is a teamwide work ethic to maximize their defensive play and smart management from Luis Rojas to optimize the defense in late innings with leads and when starters like Marcus Stroman, Luchessi, and David Peterson — who all pitch to contact — toe the rubber.

It strikes me that Luis Rojas and his coaching staff have some stiff challenges to overcome once the season begins. They have to integrate several new players on the team. They need to demand smarter fundamental baseball from their roster. They must find a way to get their bench players — many of whom were starters elsewhere — enough playing time to keep them sharp. At least at the beginning of the season, they'll still be navigating those covid protocols. And they'll have to work against the law of inertia, which sometimes trips up teams that have several losing seasons under their belt.

Rojas and company are going to have their hands full with all of the above. Another challenge for any manager and his pitching coach is to manage the bullpen most effectively. Let's just charitably say that the group of pitchers the Mets have assembled present a level of challenge that would tax the savviest manager. Rojas and pitching coach Jeremy Hefner both have a lot of work ahead of them, and how it all plays out will have a large bearing on which side of that 90 win total the Mets find themselves at the end of the season.

I've written about the bullpen previously, most recently here and here. I'm not going to rehash all of the obvious things. We all know which version of Edwin Díaz that decides to show up in 2021 will have a huge impact on how everything goes. In the local media and on Baseball Night in New York, I've had folks tell me that Díaz is primed for a great season while others guaranteed me that he would suck. The truth is, it's anyone's guess how it really goes. Díaz possesses the stuff to get batters out and a history of success and failure, depending on what you need to believe. We're all going to have to watch it play out.

What's more concerning to me is how the Mets decide to handle Jeurys Familia and Dellin Betances. While both of these guys may be more than adequate, it's just as plausible that they both are the bad versions of themselves we saw last year. If they are, they can't be allowed to sink this season. Right now, I don't want to see either of them in the eighth inning of a tight 1-run game. In my worst-case nightmare, I don't see these guys sticking around all year if they're terrible, but I do worry about them being handed the ball in big situations early on because "they've done it before."

I understand that it's likely for both of them to be on the 26-man roster coming out of camp, but neither pitched well enough this spring to be awarded high-leverage innings. At the very least, they need to earn it by doing well in lower-leverage appearances — and I don't want to hear about a "lack of adrenalin" being a factor. If they need to build up adrenalin, they can imagine how frightening it will be trying to get a decent contract next year if they don't pitch well this season.

I remember back in 2007 and 2008, when the Mets were collapsing in consecutive seasons, the offense was under a tremendous amount of pressure to score enough runs for the bullpen not to blow leads. As the season wore on, you could really see the tension ratchet up. The Mets would build a lead, the 'pen would give it back, they'd retake the lead only to watch it happen all over. It was tough losing games where they blew multiple leads. It's not something that I hope to witness this year when the Mets are trying to build a winner.

As things stand right now, I believe that Trevor May, Aaron Loup, Miguel Castro, and Jacob Barnes have all significantly outpitched Familia and Betances. Those guys deserve the first shot at the high-leverage situation. Then it's up to Rojas and Hefner to make assessments as the season goes and adjust accordingly. What a guy was able to do three seasons ago should have no influence on decisions made in 2021.

So, to bring this all back around to where we started, I don't think it's possible for me to intelligently predict whether the Mets will wind up over or under 90.5 wins. I certainly see the potential to do so, but there are too many variables to opine with any level of confidence.

The Braves have some big questions, too. They're putting a lot of confidence in Drew Smyly, who has pitched a grand total of 140 MLB innings since 2016. They're hoping 37-year-old Charlie Morton has another good year in his arm. There are some other injury issues among their starters, and they'll be using a new closer. They're hoping Marcell Ozuna can provide the level of offense he gave them in 2020 without hurting them too badly in LF.

The Braves have an obvious advantage over the Mets in young talent, both on the current roster and waiting in the wings. Their biggest advantage, however, is that they've won the Division the last three seasons. They know they can win. The Mets have to re-establish themselves as a winner and then overcome all of the obstacles that could potentially trip them up. It's always a bit trickier to be the team that has to overcome inertia. Luis Rojas needs to be part of the solution, not part of the problem. He showed signs of decisive leadership last year. Let's hope he builds on that.

Will the Mets finish ahead of the Braves? Will they top 90 wins? I honestly don't know. It would just be bravado on my part to claim otherwise. What I do know, however, is that I'm really looking forward to finding out for the first time in a long, long time. That's good enough for now.