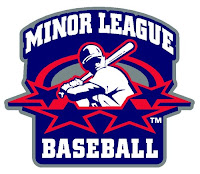 The original plan for Minor League Baseball this season called for Triple-A teams to begin playing in early April, while the lower level affiliates would wait until May to get their seasons underway. The reasoning behind this was that COVID-19 protocols limited spring training to Major Leaguers and Triple-A ballplayers. The other minor leaguers wouldn't even report for their spring training until those players departed at the beginning of April.

The possibility was left open that the Triple-A season would be delayed, and MLB teams would begin their campaign utilizing the alternate sites made famous last season. Last week MLB notified the ballclubs that this would indeed be the case. The Triple-A season has been pushed back a month to May 4, the same date that the lower classifications were slated to get their seasons underway. The alternate sites will be operating for at least the first month of the season. The question will be how MLB clubs balance their need to have potential replacement players ready with the need to ensure their prospects receive proper development.

It will be fascinating to watch how the Mets handle their alternate site for the first month. Minor League spring training will be underway, so there can be little doubt that all of their prospects will wind up in camp with their minor league clubs. Still, they might opt to allow some prospects time at the alternate site to do some advanced work if they feel that would benefit them. I'm curious how the Mets will handle things. If I had to guess, I would think the prospects already in Port St. Lonesome for the Major League camp will be left there, but that would be a long time in camp for players who have been there since the end of February.

Another intriguing question for me would be how that taxi squad mentioned in the article in The Athletic will be used as the season goes on:

In 2020, teams were allowed to have a three-player "taxi squad" to accompany the MLB team on the road in case of injury or a player entering COVID-19 protocol. In 2021, the taxi squad will be expanded to five players — one of which must be a catcher.

Taxi squad players are not active on the MLB 26-man roster; they are allowed to participate in team workouts but cannot be in uniform or in the dugout during games. (The taxi squad catcher can serve as a bullpen catcher during road games, however.) These players do not accrue major-league service time but will receive a $110 per diem.

Guidance under an updated version of the MLB 2021 operations manual indicates that "(u)pon the conclusion of each road trip, players on the Taxi Squad will return to the Alternate Training Site (except that one catcher may remain on the Taxi Squad to serve as a bullpen catcher for home games)." In 2020, the taxi squad catcher had to return to the alternate site once the MLB team returned from a road series.

I'm interested in observing how the taxi squad is handled once the minor league season actually begins. Undoubtedly the taxi squad would be populated by veteran players not on the 26-man roster rather than young prospects. Still, you wonder how long these guys would be able to stay game-ready with only team workouts and batting practice to keep them sharp. At some point, you would think even veteran players would benefit from actual ABs in Triple-A games.

Once all the ballplayers, coaches, and support personnel were vaccinated, I would seriously question the utility of these taxi squads and alternate sites. I wonder if they remain for the entire season or if, at some point, clubs feel covid is no longer enough of an ongoing threat to justify the work and expense of maintaining them.

For April, at least, there will be an alternate site. What will eventually become the Mets Syracuse club will comprise most, if not all, of the players there. There are plans in place to allow for the possibility of competition for these ballplayers beyond workouts and intrasquad games:

The Mets might not have a ton of true prospects at the Triple-A level this season, but there are some. I would expect trade acquisitions Jordan Yamamoto, and Joey Lucchesi could wind up there if they don't make the big league club out of camp. Khalil Lee, the outfield prospect who came over in the three-way trade with the Red Sox and the Royals, will undoubtedly be assigned there.

There are many players competing for bullpen spots who could conceivably start the year with Syracuse. Jacob Barnes and Franklyn Kilome have no remaining options, so they would have to make it through waivers. Current 40-man roster members Thomas Szapucki, Robert Gsellman, Sam McWilliams, Yennsy Diaz, Sean Reid-Foley, Drew Smith, Stephen Tarpley, and Daniel Zamora could all wind up there if they don't stick with the Mets.

Some interesting non-roster pitchers might be in Triple-A if they don't make the opening day roster and stay with the Mets. These include Jerry Blevins, Jerad Eickhoff, Arodys Vizcaíno, Tommy Hunter, Mike Montgomery, and Trevor Hildenberger are some of the names in that category. Some could make the opening day roster. I thought Hildenberger looked really promising in Sunday's game. Of the rest, it's debatable whether they'd take the assignment to Triple-A or prefer to look for a job elsewhere. Perhaps one or two of them would take a spot on that 5-man taxi squad.

Lee and catcher Patrick Mazeika are probably the cream of the position player prospects who might start off in Syracuse, although neither looks to me like a potential star. Johneshwy Fargas looks like worthwhile outfield depth if he accepts a spot there.

On the other hand, there will be quite a few pitchers there that could help the Major League club at some point, and how they're all handled will be quite fascinating to me. I can't help but think that, for the young players, at least, their development would be best served by playing in Triple-A in real games. Of course, there's no guarantee that the Minor League seasons will get underway on May 4. They might elect to push things back a bit more, and the Mets will be tasked with getting their prospects proper work and development opportunities in the meantime.

Last year's lack of any minor league season already presents a huge challenge for the Mets Player Development people. How they maneuver through the still unknown period from the opening of minor league spring training in April until minor league games actually do get underway is another.

There's also the question of who populates those 5-man taxi squads and alternate sites once minor league games begin. I suspect that it would be veteran players maintained in that depth role, but it remains to be seen. As I wrote earlier, even veteran players would benefit from playing in real games at some point.

I've been impressed by what the Mets have done so far, including inviting top prospect J.T. Ginn to Major League camp, even though he's still recovering from Tommy John surgery. I certainly feel more secure that these decisions will be handled correctly now than if the Wilpons still owned the team.

Everyone is understandably psyched about watching the big league club come together this spring. We're all chomping at the bit for a real playoff run again. If the goal is sustained big league success, the first step down that path is actually achieving a successful season. Nothing is more important than that. But it's still enjoyable to watch all of the development stuff going on and dream of future success. Decisions will be made this year that will have a long-term impact on those hopes.

Okay, that will do it for today. Please stay safe, be well, and take care.