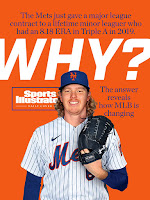 Tim Healey had an article in Newsday yesterday about Sam McWilliams, signed by the Mets this winter to compete for a spot in their bullpen. The Mets elected to ink McWilliams to a Major League contract, although the tall righty had never pitched an inning in the majors and has only 44 innings in one season at Triple-A. He didn't even excel at that level, with an ERA north of 8.  The decision to outbid other teams for McWilliams was based not on track record but rather on analysis and projection. If you're thinking to yourself that this is the kind of move the Wilpons never would have signed off on, you're almost undoubtedly correct. Indeed, this signing was one of the first indications this winter that things were changing for the Mets.

Healey explained some of the thinking behind the signing and how the young pitcher and his manager marketed him to MLB clubs:

[McWilliams] was 25 years old and a veteran of six minor-league seasons — zero major-league games — but that hardly was the whole story. In the previous year-plus, he had undergone a data- and technology-driven reinvention, helping him throw harder and use his 6-7, 230-pound body better. And the Rays, his organization from 2018-20, had moved him to the bullpen, which seemed to suit him well.

So he and his representative, Brian Grieper of Paragon Sports, offered the relevant information. They had Trackman reports — spin rate and other modern metrics that teams value — and "a little bit of video from some different angles," McWilliams said.

As I'm reading these words, I'm trying to imagine a GM sitting down with Fred and Jeff Wilpon, explaining why they should spend $750,000 of their money gambling on this player. I picture Fred's eyes glazing over while Jeff searches for something in his pocket suitable for digging out some pesky earwax. Never in this scenario can I actually imagine that GM being given the go-ahead.

Now, it could very well work out that, despite the increased velocity and spin rate, things don't pan out for McWilliams with the Mets. Trying to make smart decisions and intelligent gambles on players isn't always going to come out as a win for the team. But if McWilliams does become a valuable member of the Mets' bullpen, that $750k will be essentially chump change compared to what it costs to sign even a mediocre veteran reliever with a track record. If enough moves like this work out, the Mets can take the money saved and use it to fill other needs, perhaps to keep their shortstop and right fielders in orange and blue past this season.

I remember reading about a player like Sam McWilliams in past years and knowing that the Mets wouldn't be in on him. Or I'd read about some exciting new technology that smart teams were using to help their players get better and sigh, thinking it would be quite unlikely that the Mets would be on the cutting edge of anything. The significance of this change isn't merely that I have something cool and interesting to think and write about; a club that is seen as smart and innovative is much more attractive to potential targets.

Players want to play for a team that's a real contender, of course, but many of them understand how modern technology and proper data usage can help them improve themselves. For professional ballplayers, improved performance = more money. Most of them also are driven competitors who desire every opportunity to succeed personally and as a team. The Mets need to be seen as a modern, innovative organization rather than a bunch of Luddites with a dial-up AOL connection and a fax machine. The Mets certainly did not get everyone they went after this winter, but I genuinely believe they're building something that will help them be more attractive to potential targets in the future.

Speaking of doing things a little differently, I thought the Mets' decision to bring prospect J.T. Ginn to the Major League camp this spring was another positive sign of the difference between the current regime and the last one. Ginn fell to the Mets in last year's draft because he needed Tommy John surgery while pitching at Mississippi State last spring. By all accounts, he's doing well on his rehab, but he's not ready to compete against live batters yet.

Ginn is an excellent prospect, and the Mets need to do everything possible to help their top kids develop while working to improve and deepen their system. Giving the kid a chance to learn from the major leaguers and work with the full staff is a smart move that can only help him reach his potential. I like the move a lot. Ginn joins several other top prospects in camp as the Mets try to kickstart their development. It's a little thing, perhaps, but little things add up when you're trying to accomplish big things.

Okay, I'm out for today. Please stay safe, be well, and take care.