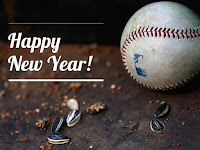 As 2022 gives way to 2023, I raise my glass to a future filled with promise and excitement for Mets fans.

On New Year's Eve, it's traditional to look backward. For many years, it was difficult for a Mets fan like me to reflect on a completed baseball season and feel very good about it. This time around, it's easy to do. Even though it didn't end as I had hoped, the 2022 New York Mets season was a huge step forward. The Mets returned to the playoffs for the first time since their 1-game cameo in 2016 after winning over 100 games for only the fourth time in their history. They took the first important step in changing the perception of the Mets as laughable losers.

The song that has become associated with the New Year's Eve holiday, "Auld Lang Syne," is an old Scottish song. The original words are indecipherable to those of us who weren't bred in the highlands six centuries ago. Dictionary.com did an excellent job of explaining the meaning of the song's title:

The words auld lang syne literally mean “old long since,” though in practice it means "old times, especially times fondly remembered," as well as an "old or long friendship." It’s from the Scots language, and the expression was first recorded in 1660–1680.

For Mets fans, "fondly remembered old times" used to require taking a significant trip back in our memories. But there are great recollections from the season that I can indeed fondly remember. Still, like previous playoff seasons of 1988, 1999, 2000, 2006, 2015, and even 2016, there is also the final, somewhat sour aftertaste of unfinished business. It's been more than 36 years since a season ended in total bliss. For me, that was almost a lifetime ago. For younger fans, the championship seasons of 1969 and 1986 seem like mythological events. The sequel to those great seasons is long overdue.
Part of what stung so much when the Mets dropped the rubber game in the wildcard series was the uncertainty about when they might return to the playoffs with a roster so strong. With so much of their pitching staff and their centerfielder hitting free agency all at once, the Mets seemed likely to take a step backward for 2023. At least, that was the worry. And those worries only grew deeper when Jacob deGrom departed for the Lone Star state a month ago.
Looking back now, that concern feels more than a little silly. While it seemed inevitable that Steve Cohen would spend enough to field another winning ball club, Cohen exceeded reasonable expectations in the spending spree that he authorized GM Billy Eppler and the rest of the front office to pursue. I honestly wonder if we'll ever witness another month like December 2022 again. Not that I doubt Steve Cohen's commitment to this club, but to land the sheer number of top free agents in a single month that the Mets managed to do was remarkable. We could still see successful future hot stove seasons that fall quite short of this one.
The holdover piece of drama heading into 2023 concerns Carlos Correa and if he will officially join the Mets. It feels as if the negotiations between the Mets and Correa have been going on for eons. Of course, it's only been a couple of weeks, with the Christmas holiday slowing things down considerably. For what it's worth, I'm reasonably confident that the Mets and Correa will reach an agreement. The incentives for it to happen on both sides will help them to find common ground.
As a fan, I want Carlos Correa suiting up for the Mets in 2023. Correa will provide more pop to the lineup and improve the infield defense. Having a great athlete like Carlos sharing the left side of the infield with Francisco Lindor will matter greatly with the new regulation against defensive shifts. However, if this deal falls through and Correa ends up elsewhere, Steve Cohen has certainly proved that he will continue to do what it takes to put a fantastic club on the field. The world will go on turning with or without Carlos Correa in Queens.
Mets fans are infamous for their angst, and I certainly was not immune to those feelings. For so many endless years with the Wilpons calling the shots, it felt that everything had to go almost perfectly for the club to have a chance at competing. Needless to say, things seldom went anything close to perfect. Anxiety about every little thing that went wrong was a natural offspring of rooting for a poorly run ball club. While I won't pretend the anxiety will ever go away completely, I honestly don't carry around that feeling of impending doom any longer. The Mets are an organization that is getting a ton of things right these days. It's okay now to let myself be optimistic, and I am. My natural northeastern pessimism rebels against this, but no matter. I honestly almost can't stand myself these days.
There was a piece on Forbes.com by longtime Atlanta columnist Terence Moore that was much-discussed on Mets Twitter this week. I first became aware of it in some Tweets by Mark Healey. It was a notably arrogant piece of writing, even for an Atlanta writer. It would have really bugged me a few years ago, because back then the superiority was completely warranted. But, at least to me, it just read as a stupid piece of fan fiction these days.
Moore's main point seemed to be that the Mets only knew how to spend a lot of money, but the Braves organization had the secret sauce to win year in and year out. Instead of making some sort of reasoned, intellectual case, Moore fell back on the idea that the Mets spent money in the last two years, but the Braves still won the division. And that would automatically happen again this year, no matter what the Mets spent. Because... team chemistry!

The bonding throughout the Braves' roster is strong, and it only will increase through stability, while the Phillies and the Mets act as if chemistry in a clubhouse and on the field is secondary to spending like crazy every year to build a team with as many celebrated free agents as possible.

That Phillies clubhouse chemistry looked pretty good in October when they sent the Braves packing, didn't it? And, while their offense looked a hitter short at times, nobody paying any attention whatsoever would have any reason to question the Mets' clubhouse chemistry in 2022. I thought it was one area where GM Billy Eppler really excelled in putting together last year's team, and it didn't happen by accident.
Terrence Moore felt the need, as Atlanta writers so often do, of lining up and defending the Braves — in this case for letting their shortstop Dansby Swanson sign with the Cubs while both the Mets and Phillies made big moves to get better. Which is fine, really. I'm not convinced that Swanson was at all worth the 7 years/$177 million he got from the Cubs. The Braves feel as if they have an in-house replacement in Vaughn Grissom that will offer similar value to Swanson at far fewer dollars. They may be right, and Atlanta has earned the space to do that with the way they have filled their roster with commitments to young players.
I admire what Atlanta has done under GM Alex Anthopoulos in developing and locking up good young ballplayers. I hope it's something that we see from the Mets going forward. The Mets can certainly look to emulate some of how the Braves operate. But I can't help but chuckle at the deep-seated arrogance of Atlanta fans and even the paid professionals who cover the team. They're used to an NL east where the Mets neither spend money nor do the behind-the-scenes work necessary to be a great organization. And they can't help but delude themselves that the good times are going to go on forever — ignoring any evidence to the contrary along the way. The real "chemistry" in operation in all of this was in whatever Terrence Moore was ingesting while he was writing his hack piece. Chemistry on a ball field is an end result of winning, period.
I've found some really great baseball-related stuff on the Forbes website since I returned to blogging in 2020. When I was writing a piece on former Texas GM Jon Daniels back in August, I found a truly invaluable article by Brian Goff from the previous September that really had some great insight into what went wrong for Daniels. But clearly, Forbes isn't immune from publishing mindless, silly clickbait, and Moore was more than willing to cash a check for typing out ~800 words of frivolous nonsense. His piece was supposed to make me feel angry, but it just wound up making me feel sorry for Terrence Moore — willing to put his name on something that felt like it belonged on a rank amateur fan site. Hell, I'm just a blogger, and I'd be embarrassed to write something that mindless.
My resolution for 2023 is to continue to shed as much of my Mets angst as possible. I understand that the NL east is going to be a real dogfight this year, and all of that spending guarantees nothing for the Mets. But I'm grateful beyond words that the Mets went from having one of the worst owners in professional sports to one of the best. For my final post-New Year's toast, I'll raise my glass to you, Steve Cohen. After so many long years of nonsense, you've made being a Mets fan fun.
Be well and take care. As always, thanks for giving us some of your time. I hope Carlos Correa is a Met before the next time I post here.
I'm trying to add some other social media sites for Mike's Mets in case Twitter goes down for the count. This week we're trying a Facebook page. Follow us on Facebook right here. And we can still be found on Twitter @MikeSteffanos.
By Mike Steffanos at January 03, 2023