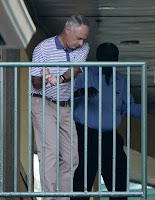 No doubt that everyone who visits this space is already aware that Opening Day has become a casualty to MLB owners' overwhelming desire to break the resolve of the Players Association. There was some optimism Monday night when the deadline was extended one more day after negotiations lasted deep into the night. I have to admit, despite my better judgment, I allowed myself to cling to some hope. Major League Opening Day is one of my favorite days of the year. It has supplanted Christmas and my birthday at this late stage of my life — particularly the birthday.

Make no mistake about it. Rob Manfred and his cabal of poverty-crying billionaires personally delivered this gigantic lump of coal to baseball fans everywhere. It was their decision to lock out the players in December. They allowed almost 2 months to go by before remotely meaningful discussions even began. There never seemed to be a real good faith attempt to avoid disaster.

Despite Manfred's protestations, repeated at his press conference Tuesday, that no one wanted to lose games, this seems to have been the owners' plan all along. They want to avoid sharing the sport's profits with players as much as possible. They're willing to lose some less profitable April dates because the loss of paychecks is likely to erode the resolve of at least some of the players. These ultra-rich guys are used to getting their own way, and that's obviously more important to them right now than the good of the game. The time of less privileged owners who loved the game with all their hearts like the legendary Bill Veeck has long since passed. These guys are in it for themselves and their oversized egos.

Make no mistake about it. This will undoubtedly damage the sport of baseball. Fans who already prefer football and basketball will only be more confirmed in their opinions. Young people who already roll their eyes at the sport their parents grew up loving probably won't even notice baseball isn't being played. Meanwhile, the fans of the sport will continue to skew older and older to the long-term detriment of the game. Eventually, baseball might find itself behind soccer and hockey in the pantheon of American sports.

These owners must be aware of that, even if they're confident that most current fans will find their way back. They have intelligent people that must be advising them that the effects of losing games this year will reverberate beyond lost ticket revenues. If this becomes a protracted lockout, even more so.

The league plans a big celebration for the 75th anniversary of Jackie Robinson's debut on April 15th. According to Rob Manfred, we've already lost the first two series of the season. The lockout won't have to go on much longer before MLB is "celebrating" Robinson without baseball being played.

From what I read, the real hit to MLB clubs will not come until the end of April, when they will have lost enough games to cost them some tv money. Perhaps at that point, the owners will finally be willing to give a bit more to the players to get them back on the field. But what if the players don't weaken in their resolve? How much more of a disaster will it become if this stalemate drags on deep into the spring or even the summer?

At this point, the goals of the owners — whether it's to crush the players, to install expanded playoffs at a discount rate, or to curb spending and further prop up the billionaires unwilling to open their wallets — almost don't matter. Whatever victory they presume to celebrate will be Pyrrhic.

For the cost of all this strife, less than two years removed from the unsightly squabbling at the height of the pandemic, figures to exceed the first-week salaries the players won't get paid and the gate receipts the owners won't get to pocket. Manfred has already told the public he considers the World Series trophy a "piece of metal." Now he has made clear what his 30 bosses believe, that the sanctity of Opening Day, that ritual of renewal for fans, doesn't really matter. The sport keeps daring its fans to stop following along.

Baseball is not dying — no industry taking in this much money is in that bad of shape — but it is fading. The cultural relevance of the sport has been in decline for decades.

At some point, this will be resolved. These gifted athletes will take the field and play ball again. When that day comes around, I'll be admittedly feeling somewhat disgruntled over being deprived of my favorite sport, but I won't even pretend that I would even consider not coming back to baseball. I've loved the game for more than a half-century. I also spent much of that time wishing for owners that weren't some lethal combination of cheapskate and numbskull. I still enthusiastically want to see where Steve Cohen's deep pockets and willingness to invest in the underlying infrastructure can take this club.

I'm 63 years old and have no children with whom to share my love of baseball. I have no long-term stake in the ultimate health of MLB. It's quite likely to survive during my remaining time on this planet. Still, as someone who has loved the game for most of my life, I honestly hope that baseball continues to be a wonderful and vital sport after I'm gone. I think most real fans of the game feel that way. Sadly, that doesn't seem to be the hope of MLB owners, many of whom are, like me, older folks. They want theirs now — and don't seem to give a damn at all what happens to this game once they've checked out.

I've said my piece on this subject. I still have non-CBA topics that I wish to continue writing about as time permits. I will do so throughout this lockout, and I hope those of you who don't find yourselves wholly alienated from this sport will continue to stop by this space. In the meantime, please be well and take care.